Netanyahu seizes chance to put Bennett in his place

Prime Minister Benjamin Netanyahu must be encouraged by a poll that anticipates 18 mandates for a new party headed by him, if he decides to reshape the Likud Party or form a new coalition. 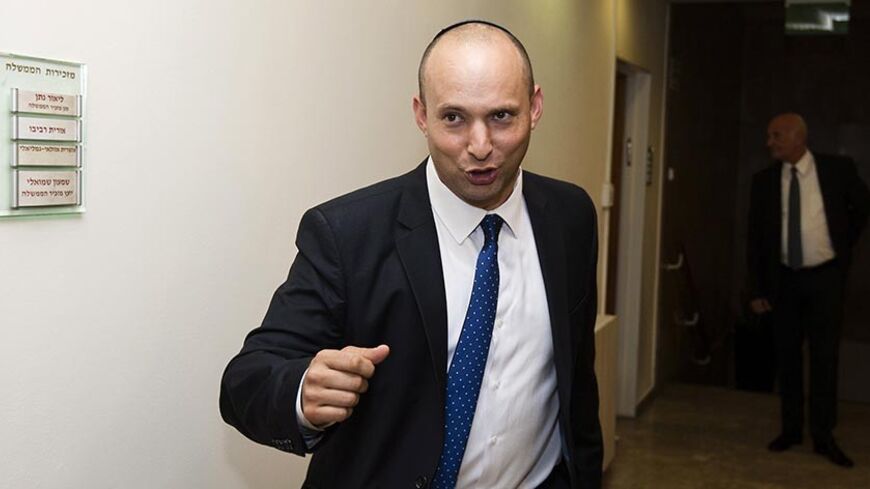 Naftali Bennett gestures as he arrives to attend the first Cabinet meeting after the swearing-in of the new Israeli government, Jerusalem, March 18, 2013. - DAVID VAAKNIN/AFP/Getty Images

A poll, publicized Jan. 28 on the Knesset Channel, predicts 18 mandates for a new party headed by Benjamin Netanyahu, should the prime minister decide to split the Likud Party to implement a diplomatic plan vis-à-vis the Palestinians. The question asked in the poll, and the numerous interpretations given to its results, reflect a fixated thought process based on the schism created by late Prime Minister Ariel Sharon in the Likud at the end of 2005 to implement the Disengagement Plan from the Gaza Strip and Northern Samaria.

When Israeli politicians attempt to anticipate the future, they share the tendency of generals to prepare for the previous war. Today’s Israeli politicians are not able to free themselves from the last major political-diplomatic event that shook them up: Sharon’s defection to establish the Kadima Party. Now, as Benjamin Netanyahu stands at a diplomatic crossroads and the possibility of adopting a compromise agreement with the Palestinians is floating around, the past Likud breakaway experience immediately comes to the fore in Israel’s collective memory, and becomes the only perceived path to realize such a process.

Ostensibly, there are many similarities between then and today: a prime minister of the Likud whose far-right dominant wing intends on embittering his life should he even dare to consider the option of evacuating settlements. The poll that predicts 18 mandates for Netanyahu reflects a situation in which his new party would receive votes from the political center instead of the right-wing electorate remaining in the Likud. This scenario greatly resembles the coalescing of public support for Kadima at the beginning of its existence.

But does Netanyahu have another option? Is he capable of remaining in the Likud and executing a diplomatic maneuver within the party, in spite of everything? A high-placed Likud minister disqualifies the option that the prime minister would engage in a Sharon-style political adventure to found a new movement. In his words, “Bibi [Netanyahu] can toy with this idea, but he is not capable of carrying out such an adventurous plan. I don’t know how far he intends to go on the diplomatic track but from my familiarity with him I reckon that he’ll stick with the Likud. Netanyahu hopes to be re-elected one more time to the premiership from the Likud. I don’t see him leaving the party.”

A political source close to Netanyahu argues that from his conversations with the prime minister, he feels that Netanyahu will be able to adopt a diplomatic Understandings' document vis-à-vis the Americans, along the lines of the road map adopted by Ariel Sharon, and still survive as head of the Likud. In his words, “What recently happened with the verbal attacks and heated words of [Economy and Trade Minister] Naftali Bennett and Likud extremists — this is a tempest in a teapot. After all, nothing substantial really happened. There is no diplomatic program and so far, Netanyahu has not evacuated even one settler.”

This source was referring to the scathing attack of the HaBayit HaYehudi chairman (Bennett) following the words of a senior member of the prime minister’s office. The source argued this week, Jan. 26, that in the case of a diplomatic agreement, Netanyahu believes in the rights of the settlers to remain in their West Bank settlements, under Palestinian sovereignty. Bennett reacted to this immediately and called it, “loss of his moral compass.” On the following day Bennett added, “Why can’t Palestinians rule over Israelis? Because they will kill them.” Bennett was asked to apologize for his words in the prime minister’s office. “We won’t ignore Bennett’s rude words and his irresponsible behavior,” they said in the office, “His behavior harms the interests of the hityashvut [settlement enterprise]. If he doesn’t apologize, he endangers the composition of the current government.”

The deterioration in the relations between the HaBayit HaYehudi chairman and the prime minister gives Netanyahu a rare opportunity to retake control of the national agenda and continue to conduct the negotiations without background noise from the right. Netanyahu senses that Bennett went too far this time without any proportion to diplomatic events, and caused him damage in the international arena and within the right when Bennett presented Netanyahu’s policy as being morally bankrupt.

Senior officials in the prime minister’s office say that Netanyahu, who never wanted the HaBayit HaYehudi Party in his government to begin with, was enraged when he understood how Bennett’s actions were beginning to harm his leadership. They believe that the prime minister is beginning to like the idea of firing Bennett or at least to humiliate him. Now that Yesh Atid Chairman Finance Minister Yair Lapid is no longer committed to his initial alliance with the HaBayit HaYehudi chairman, new coalition options are open to Netanyahu. One key possibility is holding accelerated negotiations with the ultra-Orthodox parties and including them in his government. Shas Chairman Aryeh Deri never closed the door to entering the government and holds a moderate diplomatic world-view.

Deputy Foreign Minister Ze’ev Elkin admits behind closed doors that Likud hawks, he and deputy ministers Tzipi Hotovely and Danny Danon, indirectly cause Bennett to escalate his rhetoric towards Netanyahu and the diplomatic process. According to Elkin, their internal criticism indirectly goads the HaBayit HaYehudi chairman to overtake them on the right to compete for support of the settlers. Indeed, in an interview with Arutz 7, Knesset member Hotovely attacked Netanyahu and defended Bennett’s words. “When the very thought arises of such immoral behavior as leaving settlements under Palestinian sovereignty, something so incompatible with all our basic principles, … I expect that ministers would make statements against such ideas.” Netanyahu is also familiar with these dynamics and understands that Bennett’s removal from the coalition would calm Likud’s hawks and strengthen his leadership within the party.

Numerically, most members of the Likud faction are hard-core right-wingers and, together with the HaBayit HaYehudi Party, compose a critical mass in the coalition in favor of the settlers and against a diplomatic agreement. If Netanyahu were to be successful in extracting Bennett and his people from the government, and then succeed in bringing in the ultra-Orthodox or the Labor Party (the latter would require a higher diplomatic price), the entire picture would change and the Likud would also become more moderate. Under such circumstances, the radical Likud core group could find itself isolated and, at the moment of truth, even be forced to leave the party.

While the settlers do control the Likud via its institutions, the prime minister could fire certain ministers while upgrading other Knesset members and bringing them into his inner circle, thus maintaining control over the faction and the party. That Israeli politics currently has no other candidate for the premiership who can challenge Netanyahu’s leadership could serve as a tail wind to expedite such a move.