Could Israel’s Bennett become next leader of the right?

HaBayit HaYehudi head Naftali Bennett has won his party’s leadership, but his victory doesn't open a direct path to that of the right-wing camp. 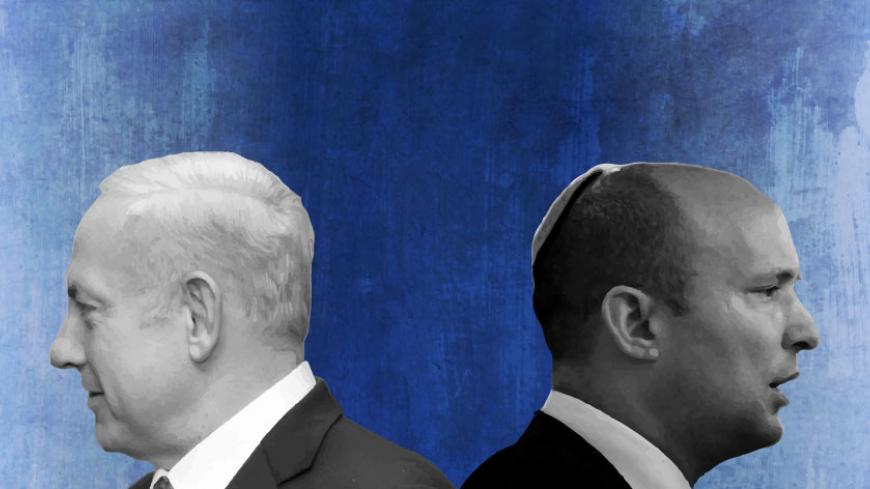 When the chairman of HaBayit HaYehudi, Minister of Education Naftali Bennett, entered the polling station on the morning of April 27, he was greeted by his supporters who shouted, "Who's there? The next prime minister!"

Accompanied by his wife Gilat, Bennett was there to vote in the primaries for his party's leadership. Bennett had initiated the early primaries, saying that HaBayit HaYehudi must be ready in the event of early elections. But beyond his desire to prepare the party for future possibilities, Bennett also wanted to hold sudden primaries in an effort to ensure that he would win another term as party head. He wanted to take advantage of there currently being no significant challenger. And indeed, the move proved to be a success. He swept the election with some 80% of the total votes. This means that for the third consecutive time, he will lead the party in the next election.

Two candidates ran against him. They were Jonathan Baranski, a reserve colonel, who lives in the settlement of Eli, and Yitzchak Zaga, a rabbi and economist. Both men claimed that Bennett had turned HaBayit HaYehudi into a fashionable momentary phenomenon, while obscuring its religious Zionist banner. While Bennett sees himself as leader of the right after the Benjamin Netanyahu era, Baranski and Zaga would rather preserve HaBayit HaYehudi as a sectoral party. In other words, they do not pretend to one day take control of the government. Just before the election on April 26, Baranski accused Bennett of "elegantly disassociating himself from the true path of religious Zionism."

Baranski announced his decision to run against Bennett in an interview with the Mako website April 20, saying, "I felt as if the way the party's leadership had disassociated itself from the values of religious Zionism made it impossible for me to feel at home there." He then criticized the way that HaBayit HaYehudi allowed for the creation of a separate prayer space for Reform Jews at the Western Wall and ignored the issue of the Amona outpost, which was evacuated in February for illegally occupying private Palestinian lands.

Neither the media nor the political system showed much interest in the primaries. Not only was the outcome entirely predictable, the party continues to be associated with a particular sector of the population, despite all of Bennett's efforts to break new ground. Bennett may have his eyes on the prime minister's office, but the chances of him getting there as head of a religious party identified with the settlers are slim at best. Nevertheless, no one contests that in 2012, Bennett took a party in decline, with just three seats, and turned it into a major success story. Under his leadership, it became a vibrant party with 12 seats and real power in the government.

It has long been forgotten that Bennett did not choose to join HaBayit HaYehudi. Rather, he was forced to do so. At first, he wanted to run as part of the Likud, Israel's largest right-wing party, but then he realized that his path there was blocked because of his bitter feud with Netanyahu. The fight erupted when Bennett served as Netanyahu's chief of staff (2007-2008). Bennett arrived at HaBayit HaYehudi during his search for an alternative party platform, and went on to seize control of the party with the help of his cohort, current Justice Minister Ayelet Shaked. The rest is history.

HaBayit HaYehudi walked away from the last election in 2015 with the feeling that it failed, having shrunk to just eight seats. Successful coalition negotiations eventually improved this dismal situation, with the party receiving three ministerial portfolios. Having taken the Ministry of Education for himself and the prestigious Ministry of Justice for Shaked, Bennett make the people forget the disappointing election results and get back on track. It is this track that he thinks will lead him to the premiership.

In an effort to take this plan to the next stage, Bennett increased his involvement in diplomatic and security issues as a member of the security cabinet. By insisting on maintaining his ideological independence, he was able to position himself in the media as the only minister to warn against the threat posed by the Hamas terror tunnels during Operation Protective Edge in the summer of 2014. At the same time, he continued — and continues — to turn HaBayit HaYehudi into a party that represents all of Israel. He is trying to sever his association with the far right. These efforts include, according to analysts, ending his partnership with the National Union faction headed by Knesset member Uri Ariel.

This detachment from Ariel, as well as criticism of Bennett from within his own party, as voiced by Baranski and Zaga, are examples of the trap in which Bennett is now caught. On the one hand, he wants to expand the circles supporting the party and realizes that Ariel is an obstacle to that. On the other hand, Ariel brought the hard right, including the settlers, into the party, making it possible for Bennett to win eight seats. Without them, the election results would likely have been worse.

At the same time, Bennett is being forced to maneuver between the ultra-Orthodox nationalist voices in the party and those who feel that he is destroying HaBayit HaYehudi's very DNA as a religious nationalist party by conscientiously avoiding issues of religion and state. The way the crisis surrounding the Amona outpost was handled just a few months ago was also a headache for Bennett, with many people in the party claiming that he failed to use his power in the government in a timely manner to prevent the settlement's evacuation.

HaBayit HaYehudi has just 31,000 registered voters, most of them religious nationalists, settlers and ultra-Orthodox nationalists. Since this core will also decide on the party's list of candidates for the Knesset, it is hard to believe that HaBayit HaYehudi will break new ground with gestures to the wider public.

And so, Bennett is caught in a catch-22. The more he advocates for a more liberal, less religious agenda while dissociating himself from groups on the far right, the more likely he is to lose "safe" votes. On the other hand, if he fails to change the party's character and image, the chances of him increasing its strength so significantly that it offers an alternative to the leadership of the right — and to the state itself — are slim at best.

The old-new party chairman will have no choice but to maneuver within this tangled web of constraints from now until the next election. While happenstance brought him to HaBayit HaYehudi and turned him into a rising political star, it is also blocking any path he might have to become the leader of the right. He may control the party, but time and again he learns about the limitations of that party as a launching pad for an eventual run for prime minister.