The provocations of Housing Minister Uri Ariel force his party chairman Naftali Bennett and other members of the coalition to veer to the right, dragging Prime Minister Netanyahu with them. 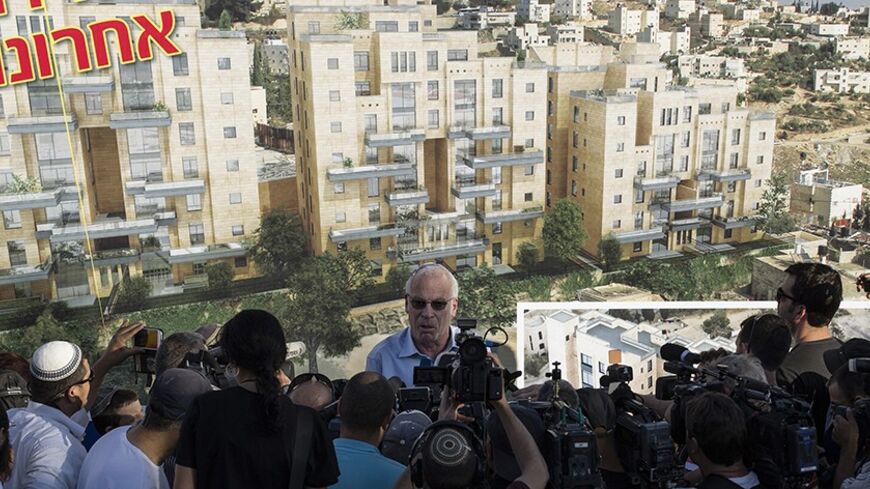 Israeli Housing Minister Uri Ariel speaks to reporters at a ceremony announcing the resumption of construction of an Israeli neighborhood in East Jerusalem, Aug. 11, 2013. - REUTERS/Ronen Zvulun

On Sunday morning, March 16, while the country was in the midst of celebrating the Jewish holiday of Purim, and the “Adloyada” — festive carnival processions — were underway in all the country’s major towns, Minister of Housing Uri Ariel went up to the Temple Mount. Despite the tense atmosphere at the site and the riots that occurred there that very morning, Ariel turned down a recommendation by the police that he forgo this visit and decided just to shorten it. The combined religious and nationalist significance of the Purim holiday and the provocative visit by a right-wing minister at the contentious site, accompanied by a security detail as he wandered among the Muslim worshippers, could easily have caused an incident that could have gotten out of control and set the whole region aflame.

But Ariel, who is the No. 2 person in HaBayit HaYehudi, wasn’t at all disturbed by the potential damage. Quite the contrary. The more scrutiny afforded to the behavior of a man considered to be one of the foremost representatives of the fundamentalist right in the Knesset, the more it becomes apparent there is a pattern to his provocative behavior and that it repeats itself. Ariel constantly tries to be an instigator, to set the public mood on a high burner and to sabotage Israel’s foreign policy while diplomatic negotiations are underway.

Ariel has a particular obsession with everything to do with the Temple Mount. He went up there earlier this year, in February, and claims that he plans to continue with a custom that he began when he was first elected to the Knesset, at which time he went up to the Temple Mount once a month. After being appointed minister, he was forced to reduce the frequency of these visits, due to the meticulous security arrangements that they required. He does, however, insist on announcing any visits that do take place on his Facebook page. After the last visit he wrote, “The reality in which rioters set the agenda on the Temple Mount and prevent Jews from going up there is unacceptable. I went up to the Temple Mount this morning, and plan to continue going up there in the future.”

It seems as if Ariel, who lives in the West Bank village of Kfar Adumim, east of Jerusalem, has a full-time job appeasing the settlers and representing their narrow interests. It has been years since the settlers had such an authentic and militant representative in the government, and minister of housing no less, a position that they consider to be the most important of all, and a position he treats as if he was following some religious obligation.

As minister of housing at a time when soaring real estate prices are thought to be a bubble that could explode at any time, Ariel takes great pains to spread statements regarding his commitment to lowering the price of apartments. However, it also seems as if the minister’s promises aren’t considered especially reliable, at least when it comes to the general public. He is much more closely identified with advancing the settlers’ interests than with any effective activity to resolve the housing crisis. In a survey of public satisfaction with the government’s ministers, which was released earlier this month by Israeli TV Channel 2, Ariel was ranked 22nd, just one point higher than Finance Minister Yair Lapid, who was ranked last. It is safe to assume that the minister did not lose any sleep over this data. All he cares about is pleasing the right and the settlers.

In terms of results, Ariel may not be able to provide the settlers with a definitive death certificate for the negotiations with the Palestinians. The talks are still going on and continue to pose a threat to the settler enterprise. On the other hand, he can certainly show a long list of achievements when it comes to interfering with the talks and creating an overall feeling that Prime Minister Benjamin Netanyahu is incapable of getting any agreement approved.

On important dates during the negotiations, such as visits by US Secretary of State John Kerry to the region, Ariel is assiduous in announcing the sale of new housing units across the Green Line. He ends up causing a diplomatic uproar, but the higher the flames, the happier he is.

In August, while the Americans were hard at work trying to get the diplomatic negotiations moving, it turned out that the Ministry of Housing was busy marketing more than 1,000 new apartments in Jerusalem, Judea and Samaria. At the time he explained that construction across the Green Line had been restrained until then, which made it necessary to build more. In an interview with Army Radio he boasted that this was just the first course. "Why does Kerry have to know everything?” asked Ariel, adding, “Everybody knows that HaBayit HaYehudi [party] is in the government to build the land of Israel, among other things.”

He succeeded in causing a commotion in November 2013, when his ministry announced the construction of thousands of housing units in the territories. The White House demanded clarifications, and Netanyahu was forced to call Ariel to order. “This step does not contribute to settlement,” the prime minister told him. “On the contrary, there is damage here for settlement. This is a meaningless step — legally and in practice — and an action that creates an unnecessary confrontation with the international community at a time when we are making an effort to persuade elements in the international community to reach a better deal with Iran.”

Despite that he serves as a minister in a government that is engaged in diplomatic negotiations with the Palestinians, Ariel continues to act like the most extreme right-wing activists, organizing some demonstrations against this very government and participating in others. A few weeks ago he took part in a right-wing demonstration on Feb. 13 in the contentious Area E-1. That demonstration was intended to signal to Netanyahu that he should not make any progress in the diplomatic process and not succumb to American pressure. Ariel was also one of the initiators of the mass prayer vigil on Jan. 30 against the diplomatic process advanced by the Netanyahu government.

In another instance, no less absurd, he participated on Oct. 28 in a right-wing demonstration outside the Ofer Prison on the eve of the release of terrorists in accordance with the understandings reached with the Palestinians to set the negotiations into motion. It was actually right-wing activists who were able to focus attention on the inconsistencies in the minister’s behavior by opposing the prisoners’ release, but at the same time continuing to serve in the government. They called him a “leftist” and a “traitor” and interrupted his speech.

When he is not busy with all of that, Ariel also makes a point of announcing that he will do what he can to have ministers Yair Lapid and Tzipi Livni removed from the coalition government and replaced with representatives of the ultra-Orthodox parties, with whom he has made sure to foster close relationships. And every so often, he also comes out publicly against President Shimon Peres. In an interview with Maariv, he accused Peres of destroying the institution of the presidency. He said that Peres sided with an extremist minority and that he undermined the prime minister, “when he says that it is not necessary to demand recognition of Israel as a Jewish state.”

Unlike the chairman of his party, Naftali Bennett, who lives in the central district city of Raanana and whose relationship with the settlers can be characterized by an element of suspicion, Ariel is their own flesh and blood. As a result, Bennett realizes that if he wants to keep his seat, he had better coordinate his views with those of Ariel, who has not ruled out running for the position of head of the party at some point in the future. The more that Ariel tugs toward the farthest reaches of the right, the more Bennett is forced to follow his lead. That is how the members of HaBayit HaYehudi are pulling the whole coalition to the right.

Why would the prime minister allow a minister in his government to act so irresponsibly, to harm to its foreign policy and possibly even incite a riot on the Temple Mount? “It all stems from weak leadership,” contends a senior minister from the Likud Party. “Just like Netanyahu refused to act and thereby let extremists in the Likud take over the party, now he prefers not to deal with the lunatics in the government, thinking that in the worst-case scenario, they will either resign or get fired. The thing is that they can cause a lot of damage, diplomatically and security-wise if, for instance, things got out of control during one of Ariel’s visits to the Temple Mount.”