The new tenders for construction in the settlements were intended to provide the Israeli right with an imaginary achievement, allowing Prime Minister Benjamin Netanyahu to continue negotiations. 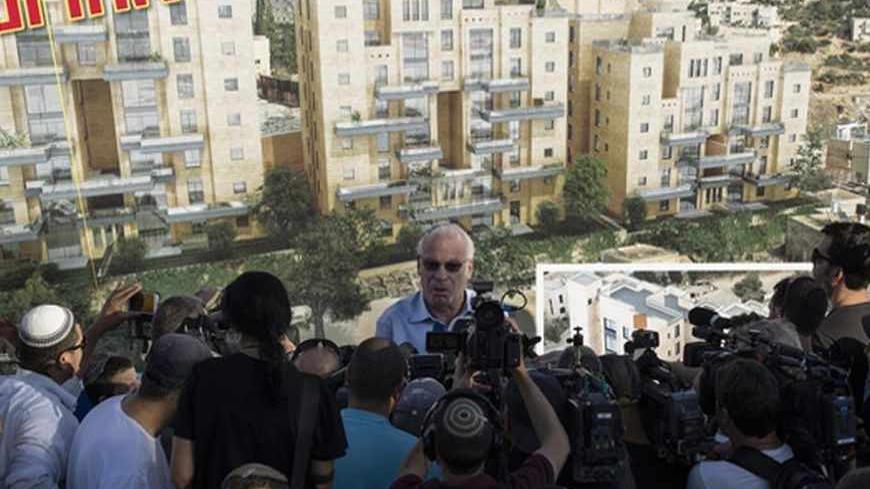 Israeli Housing Minister Uri Ariel speaks to reporters at a ceremony announcing the resumption of construction of an Israeli neighborhood in east Jerusalem, Aug. 11, 2013. - REUTERS/Ronen Zvulun

Housing Minister Uri Ariel’s constituents can be very demanding. Once the government decided to renew negotiations with the Palestinians and release prisoners with blood on their hands — including some members of Hamas — Ariel had no choice but to provide an explanation. Given that there were no relevant answers that would appease his voting base, he and the chairman of his party, Economy and Trade Minister Naftali Bennett, needed to come up with some convincing spin that would allow them to sit in the government and keep their cabinet positions.

This is how Ariel’s festive announcement on Aug. 11 about the marketing of 1,200 housing units across the Green Line should be interpreted. Ariel and Bennett are facing a crisis, so Prime Minister Benjamin Netanyahu allows them to boast about new construction in the occupied territories, and the Americans turn a blind eye to ensure quiet in the coalition. "The government of Israel is taking steps to reduce the cost of living in all parts of the state of Israel. No country in the world would allow other countries to dictate where it can and cannot build." That was the content of the housing minister’s defiant announcement on Aug. 11, just three days before the renewal of the negotiations.

It was inevitable that Ariel’s announcement would evoke angry responses on the left and in the Palestinian Authority. Even Finance Minister Yair Lapid released a special response, warning that this was like slipping a stick between the spokes of the wheel of peace. Everyone from Knesset member Zehava Gal-On of Meretz to Palestinian official Saeb Erekat condemned the announcement as an impediment to the talks. They brandished the marketing of construction tenders across the Green Line as evidence that Netanyahu is not coming to the negotiating table in good faith.

This is exactly the response that Ariel and Bennett were hoping for. The automatic condemnations from the left only boosted their achievement among their constituents. The way the settlers see it, if Gal-On is angry, they must be doing something right. So these two men exploited the tumult for all it was worth. Bennett responded to the enraged Palestinian reaction on his Facebook page on the night of Aug. 11, writing, “Saeb Erekat is now saying that we are not allowed to build in our capital, Jerusalem. The question is not, ‘Why are we building in Jerusalem now?’ but ‘Why haven’t we been building in Jerusalem until now?’ We will continue fighting to build up our land, without any apologies.”

The response of HaBayit HaYehudi party’s constituents to the decision to release prisoners was so severe that there were even calls for Bennett’s resignation. Now, however, he can argue in his defense that his continued participation in the government is essential if construction in the occupied territories is to continue, and that — more generally — things could have been much worse. On the other hand, the truth of the matter is that the marketing of 1,200 housing units is hardly big news to the settlers. It is simply an early stage in the release of public construction tenders by the Housing Ministry. It will be a very long time until the first bulldozer actually appears at the site.

Most of the apartments, almost 800 of them in total, will be in various neighborhoods of Jerusalem, while the rest will be located in Ariel, Efrat, Ma’ale Adumim and Beitar Illit. This means that the construction is taking place within the big blocs of settlements, in towns that should remain under Israeli sovereignty in any future agreement.

That is why no conclusions whatsoever regarding the prime minister’s intentions in these talks with the Palestinians should be drawn from the housing minister’s announcement. It is just like Netanyahu’s decision in 2009 to impose a complete freeze on construction in the settlements at the request of US President Barack Obama. That was certainly no proof of how serious or especially eager Netanyahu was to relaunch the diplomatic process. The reality proved to be the exact opposite. The freeze in construction actually led to a freeze in the diplomatic process, which lasted three years.

It would be a mistake if supporters of the diplomatic process, Israelis and Palestinians alike, were to take on Netanyahu because of HaBayit HaYehudi party’s housing tenders. The decision can easily be reversed if the renewal of negotiations gets serious and both parties arrive at the negotiating table cleanhanded. Every such step can be regarded as a tactical measure taken by Netanyahu for political reasons, to keep his coalition intact. By allowing HaBayit HaYehudi to present some imaginary achievement to its constituents, Netanyahu is earning himself a bit more peace and quiet in his coalition.

Further on down the road, if it turns out that he is truly serious, Netanyahu can exploit the calm to make real progress in the negotiations, while maintaining the same coalition. When the moment of truth arrives and the prime minister is forced to make some fateful decision or other that involves Israeli concessions, he will build a new coalition anyway and replace HaBayit HaYehudi with the Labor Party. As such, the significance of these 1,200 housing units should not be exaggerated. They will not be the obstacle preventing a peace agreement.