HaBaYit HaYehudi Chairman Naftali Bennett has criticized the prisoner release, but is not going so far as to jeopardize his seat as Israel’s Economy and Trade minister. 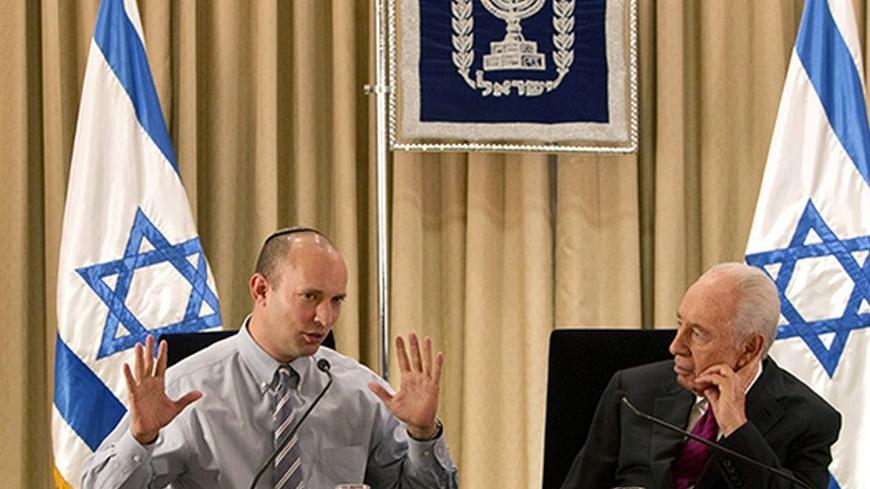 It’s a ritual by now. The prime minister decides to release Palestinian prisoners, and HaBayit HaYehudi Chairman Naftali Bennett and his fellows shout out from every possible forum how they oppose such a “detrimental” move. The government approves the decision anyway, and the next day, it is back to business as usual, as if nothing happened. That’s exactly what happened two months ago, on Aug. 12, and that’s what happened this week, on Oct. 27.

It is safe to assume that HaBayit Hayehudi’s ministers have not yet managed to forget during their short term in office a lesson that all young Israelis learn in high-school civics class. According to the principle of joint responsibility, all ministers bear responsibility for all the decisions and actions of the government, regardless of whether they voted for or against them. As such, the only way to see the ruckus that HaBayit HaYehudi caused before the vote is as a cynical and ugly act of provocation, intended to draw fire away from them.

There is nothing that Economy and Trade Minister Bennett can do to absolve himself of responsibility for the decision, not even if he scrawls a thousand times on his Facebook page that the release of terrorists is dangerous and shameful, and that it weakens the government. He is nonetheless a party to the release, exactly the same way that Justice Minister Tzipi Livni is after voting for it. Bennett’s attempts over the past few days to turn Livni into the focus of public criticism are both ridiculous and untrustworthy.

All too often, the chair of HaBayit HaYehudi forgets that he is also a member of the more compact diplomatic-security cabinet. He acts irresponsibly instead, as if he were a member of the opposition who just happened to have a seat in the state of Israel’s most sensitive forums. He attacks the government’s decisions on diplomatic issues and embarrasses the prime minister in the international arena.

What makes it all the more infuriating is that Prime Minister Benjamin Netanyahu chose to release the prisoners only after Bennett and the other members of his party prevented him from freezing construction in the settlements as a precondition for the renewal of the negotiations. Bennett and Housing Minister Uri Ariel, also from HaBayit HaYehudi, were well aware of the fact that if there were no freeze in construction, there would have to be a prisoner release. And while Netanyahu may have known that HaBayit HaYehudi would vote against such a release, he did not expect the party to turn it into a campaign against him.

Bennett acts on the assumption that his shrill statements against the diplomatic process have created the idea among his supporters that he is the gatekeeper within the government as it heads toward a dangerous agreement with the Palestinians. He believes that if he occasionally causes unrest inside the government over fundamental ideological issues, he will be able to stay in power. It will be interesting to keep track of Bennett’s red lines as the diplomatic negotiations with the Palestinians progress. Meanwhile, his boundaries seem remarkably flexible. The government is releasing the murderers of Jews, and he isn’t even threatening to pull out of it.

He is quite familiar with the hard-core supporters of HaBayit HaYehudi who have voiced their dissatisfaction with his participation in a government that promotes the diplomatic process. Quite a few of the settlers criticize him sharply on a regular basis, including on his Facebook page, where they have even demanded that he resign from the government. These people constitute his electoral base, so Bennett does whatever he must to show them that they are criticizing him in vain.

Bennett has chosen that well-known tactic which says that the best defense is a good offense. On Sunday, Oct. 27, just a few hours before the vote, he allowed Knesset member Orit Strock of his party to submit a bill to the Ministerial Committee for Legislation that would forbid the release of prisoners as part of diplomatic negotiations. He knew that the proposed law would fail in committee, but he wanted to show his electorate that HaBayit HaYehudi is committed to fighting for the principles of the right, while embarrassing the Likud’s ministers and presenting them as being responsible for the release of terrorists.

Feeling himself caught in a quandary, the prime minister sent his cabinet secretary, Avichai Mandelblit, to the committee meeting to remind the ministers that they themselves approved the release of prisoners at a cabinet meeting, and that if the proposal passes, it will lead to a breach of trust between Israel and the United States.

The Likud’s ministers realized exactly what Bennett was hoping to achieve through them, and they were livid. They certainly had no intention of allowing Bennett to score points at their expense. Interior Minister Gideon Sa’ar of the Likud called on Minister for Senior Citizens Uri Orbach from HaBayit HaYehudi to resign from the government if he thought that the release of prisoners was really so utterly immoral. Sa’ar, who has plenty of experience with political confrontations of this sort, scolded Orbach in front of all the other ministers, saying, “The government approved it, so observe the protocol of joint responsibility. … You’re not backing up the government. You’re just acting cynically.”

Of course, his remarks did not prevent Bennett from putting his own spin on the incident. On the contrary, the exact opposite happened. After the Ministerial Committee for Legislation voted to reject the proposed law, HaBayit HaYehudi released a statement saying, “This is a sad day for the struggle against terror in Israel. We will continue to fight with all our strength against the release of murderers, and we regret and are startled that the Likud’s ministers did not support the proposed law, which would have put an end to the release of murderers.”

Regardless of whether this spin influences his supporters or not, Bennett cannot continue to have his cake and eat it for much longer. As soon as it becomes evident that there is progress in the talks with the Palestinians, he will have to choose between keeping his seat and holding true to his ideology. The way things have looked until now, even with his sharp criticism of the release of prisoners, it is not at all certain what he will do.