Jews, Arabs use religion as tool to escalate conflict

The murders at the Bnei Torah Kehillat Yaakov synagogue in Jerusalem are yet another sign of both sides in the Israeli-Palestinian conflict adding religious elements to the territorial dispute. 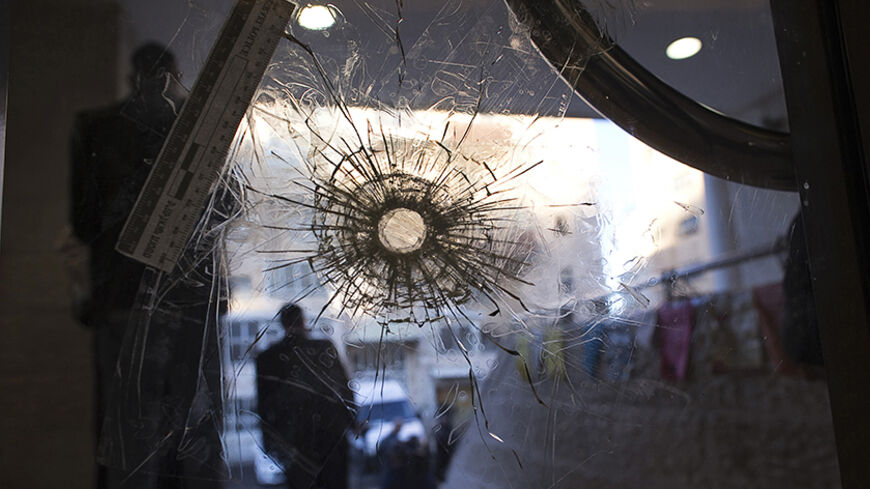 A bullet hole is seen in the door of a synagogue in Jerusalem where two Palestinian militants killed four rabbis and a policeman, Nov. 19, 2014. - REUTERS/Ronen Zvulun

The Bnei Torah Kehillat Yaakov synagogue, whose worshipers joined other victims of the Israeli-Palestinian conflict on Nov. 18, does not serve the residents of one of the radical settlements in the heart of the West Bank. The Har Nof neighborhood, where this house of prayer is located, is not one of the Jewish neighborhoods built in East Jerusalem after the 1967 war despite fierce Arab opposition. Very few among the population of this ultra-Orthodox neighborhood on the western outskirts of West Jerusalem serve in the military. Those among them who vote in general elections often cast their ballots for the ultra-Orthodox Yahadut HaTorah or Shas Party. These two parties are not part of Prime Minister Benjamin Netanyahu's government, the one that approves the expropriation of Palestinian lands for the construction of Jewish neighborhoods and encourages Jews to settle in the village of Silwan, at the foot of the Temple Mount.

The decision by two Palestinians to conduct a massacre at this site, of all places, and to select these particular people to murder, out of all others, is a sign that the Israeli-Palestinian conflict is undergoing a dangerous shift. It has been turning from a dispute over land and security, for which rational solutions can be found, into a religious-nationalistic conflict, a less rational realm. Terms such as “compromise,” “logic” and “brotherhood of nations” are located outside the latter's jurisdiction.

The religious component of two Muslims murdering four Jewish worshipers walking slowly on the doorsteps of a synagogue enhances and radicalizes emotions and reactions to this terror attack in comparison to those after an attack in a market, on a bus or in a shopping mall. Similar emotions and reactions were registered following the March 2008 murder of eight students at Jerusalem’s Merkaz HaRav rabbinical college as they studied a Talmud page and after the March 2002 murder of 30 Jews who had sat down to celebrate Passover at the Park Hotel in the town of Netanya. By the same token, a Jewish settler's murdering of 29 Muslim worshipers kneeling in prayer at Hebron's Ibrahim Mosque (Cave of the Patriarchs) in February 1994 along with arson attacks on dozens of mosques and the spraying of hateful graffiti on the walls of monasteries produce a different response than an attack on the passengers of a Palestinian taxi or the burning of Arabs’ fields in the Mount Hebron area.

One can read one Muslim version of this phenomenon in the Hamas charter and on the organization’s websites. The more the Oslo Accord becomes a distant memory and the secular camp loses altitude, the more the Palestinian public tends to seek solace in the arms of religion, and the extremist Hamas gains altitude. Ambiguity and the political divide within the Israeli peace camp combined with the inability of the Labor, Yesh Atid, Meretz and Hatnua parties to propose an alternative leadership leave the political sphere wide open for religious-nationalistic messages, which of late include more often than not the Temple Mount.

In-depth surveys conducted by the Israel Democracy Institute indicate that the thronging toward religion and the introduction of God into the Israeli-Palestinian conflict also has a Jewish version. For instance, a 2009 survey indicates that 77% of Jewish respondents were convinced that a “higher power” directs the world. The most relevant finding for our purposes is the one that shows that two-thirds (67%) of the Jews living in Israel are convinced that the Jews are the chosen people (like many ancient nations). The problems start when more and more Jews believe that God’s promise to bequeath the land, all of it, to them and them alone relates to the here and now. The biggest problem stems from dressing up this belief in military uniform.

A former high-ranking security official who has thoroughly researched the phenomenon of the Israel Defense Forces' (IDF) increasing religiosity told Al-Monitor in early November that a problem of strategic proportions had grown right under our noses. Voila. In a document dealing with joint service by secular and religious soldiers sent to Chief of Staff Benny Gantz in June 2011, Maj. Gen. Avi Zamir, head of the army’s manpower branch, wrote that the threats to the continued existence of the “people's army” model are a “strategic issue for the top IDF military command.” In a report issued in 2012, the state comptroller wrote that claims regarding a link between a change in the status quo in the army on religious issues and the nature of educational activities in the IDF seriously required the chief of staff and his senior command to formulate clear regulations. Given the importance of the issue, the comptroller added, it would be fitting that the political echelon as well, namely, the minister of defense, examine it and make decisions.

This report’s recommendations, much like other reports born at the state comptroller’s office, were apparently never implemented. Religious officers have taken over more and more key positions in IDF units. Only in rare cases, such as that of Col. Ofer Winter, commander of the Givati Brigade, has the phenomenon of religion in the army been brought to the public's attention.

During Operation Protective Edge, Winter wrote in a battle order to his troops: “I raise my eyes to the heavens and call, with you, ‘Hear O Israel, the Lord our God, the Lord is One.’ Lord our God of Israel, grant us success on the road we take and in the fight for your people of Israel against an enemy that reviles your name.” A soldier reported that the military rabbinate had distributed a booklet that said “it is forbidden to cede even one millimeter of the Land of Israel” and that “cruelty toward the enemy is sometimes a good quality.”

The events of recent days in Jerusalem prove that the mixture of tribal rivalry and political interests, which has filled the diplomatic vacuum to the brim and permeated all corners of the two societies, has been augmented by a mixture of religious passions blended with messianic nationalism.