As the wave of violence continues, many ultra-Orthodox Jews are acquiring weapons for self-defense, and the country’s firing ranges and security-guard training courses are reporting a significant uptick in ultra-Orthodox participants. 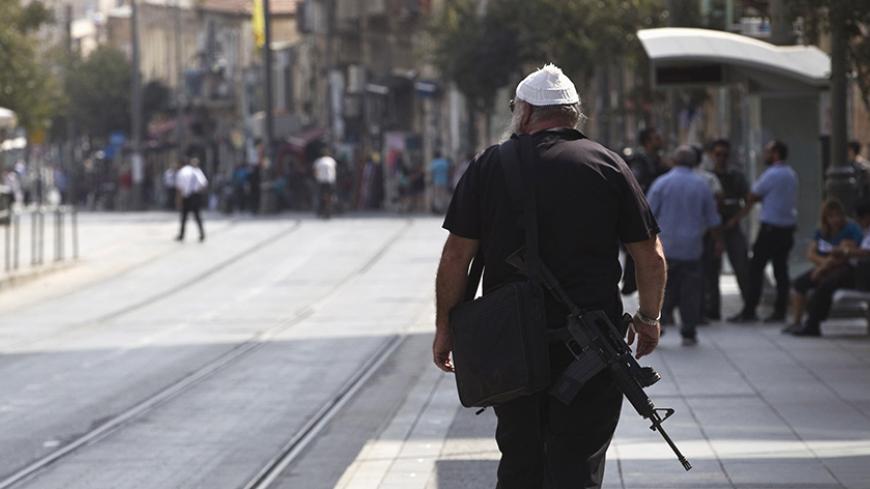 The prevailing sense among the ultra-Orthodox sector is that they are marked as a major target for attack in the current wave of violence. There’s good reason for them to feel that way, too. In an Oct. 11 press briefing, Acting Police Commissioner Bentzi Sau noted that many of the victims were ultra-Orthodox Jews or people in uniform. As if to highlight this point, a propaganda video that appeared recently on Palestinian social networks called explicitly for the murder of religious Jews. The clip shows two men, one ultra-Orthodox and the other national-religious, based on their outward appearance, walking in what looks like the alleyways of the Old City of Jerusalem. A young Arab stands off to the side, watching how they push young Palestinian children around with the utmost contempt. Finally the Arab ambushes them and stabs them to death.

The way Jerusalem’s ultra-Orthodox see it, they were targeted by terror even before the current escalation of violence. The most deadly attack of the past year, for example, took place in a synagogue in the Jerusalem neighborhood of Har Nof, where four ultra-Orthodox worshippers and a policeman were killed.

With the rise of incidents came the realization among the ultra-Orthodox that they need the means to defend themselves. They started buying tear gas, pepper spray and stun guns. Hundreds of these and similar items were sold near the Mirrer Yeshiva, the largest rabbinical college in Israel, located in the Beit Yisrael neighborhood of Jerusalem, while stands selling these and other self-defense items popped up in Jerusalem’s ultra-Orthodox neighborhood of Geula. An ultra-Orthodox website even published an article that featured a discussion among ultra-Orthodox women about acquiring these items to protect themselves. The women also debated the option of learning self-defense.

Because of the tense atmosphere, there are even some ultra-Orthodox Jews who want to buy guns. One of the most prominent leaders of the ultra-Orthodox community, Rabbi Moshe Sternbuch, issued a ruling allowing the ultra-Orthodox to carry arms for self-defense. Many of them are turning to specialized schools that train and license students to use a pistol.

Yehuda Donat is an ultra-Orthodox Jew from the greater Jerusalem area who distributes newspapers for a living. Given the escalation of violence, he decided to carry a gun. “I spend a lot of time traveling the roads surrounding Jerusalem, and I can actually feel the danger,” he told Al-Monitor. “I’ve had rocks thrown at my car plenty of times, and I know that I have to defend myself. If I ever got stuck on the road with a flat tire, it would feel horrible not having any protection. We live in a place where someone can come kill you or kidnap you at any given moment. I have five kids. I have a responsibility. That’s why I started training at the firing range. I hope that I can get my own gun in as little time as possible.”

As would be expected, the growing interest among the ultra-Orthodox in obtaining gun licenses quickly conflicts with Israel’s tedious bureaucracy. Take the case of Elhanan Sternhal, a father of three from Beitar Illit who owns a moving company. “I travel quite a bit,” he told Al-Monitor, “and I was present at the stabbing incident that took place at the [West Bank] Gush Etzion intersection last year, when a young woman of 26 was killed. I’ve been giving a lot of thought to getting a gun license ever since then. I tell myself that I can never really know where I’ll end up. If I had a gun, perhaps I could neutralize a terrorist before he has a chance to kill anyone. But the bureaucracy is grueling. You need all sorts of medical documents and confirmations of all sorts. It’s a very long path. If the current situation continues and these attacks become a routine matter, I have no doubt that I’ll take out a gun license. For now, however, I’ll just wait.”

Lt. Col. Sharon Gat (res.) heads the Caliber 3 security and counter-terrorism school in the Etzion settlement block, offering gun training and licensing. He confirms that there has been a sharp rise in the number of ultra-Orthodox people seeking a gun license. “If just 0-1% of the participants in our training courses used to be ultra-Orthodox,” he told Al-Monitor, “they’ve grown to 5% of our students in a very short time. That’s an enormous increase. But that’s nothing compared to the rise in the number of ultra-Orthodox Jews in security-guard training courses. Their numbers are skyrocketing. Based on the figures I have, 25% of security guards in Jerusalem and the surrounding areas are ultra-Orthodox Jews. In the past, there weren’t any ultra-Orthodox at all in that profession.”

Gat points out that he recently realized how the ultra-Orthodox sector has its own unique problems with guns, compared to Israeli society in general: “The ultra-Orthodox don’t serve in the army, and they have a tough time emotionally with killing machines,” he said. “They take it much more seriously than the average Israeli, who served in the army and already shot an M-16 in basic training, if not during regular service. On the other hand, they see that Jews are being attacked, especially the ultra-Orthodox, who are clearly Jewish by their external appearance, and they realize that it is important.”

According to Gat, the number of people in the ultra-Orthodox sector trying to get a gun license would be even larger if the bureaucratic licensing process were a bit easier.

According to the Palestinians, the recent wave of terrorism stems from attempts by Israel to change the status quo on the Temple Mount. Though the ultra-Orthodox are the most outspoken opponents of Jews visiting the Temple Mount — an objection based on religious, political and security concerns, they have come under attack more than any other sector. This dichotomy has fostered bitterness among the community, so much so in fact that over the past few days, Knesset member Uri Maklev and Deputy Mayor of Jerusalem Rabbi Yitzhak Pindrus of Yahadut HaTorah have claimed that people who insist on visiting the Temple Mount are ultimately responsible for the murder of Jews. Similarly, relatives of one of the victims of the attack on Malchei Yisrael Street in Jerusalem also blamed Jews who visited the Temple Mount. At the funeral of ultra-Orthodox Rabbi Yeshayahu Krishevsky in Jerusalem, some ultra-Orthodox Jews handed out flyers blaming the murder on Jews trying to visit the Temple Mount.

While the majority of the ultra-Orthodox community does not serve in the Israel Defense Forces (IDF), the desire of so many of them to undergo proper weapons training to defend themselves seems to be drawing them into the circle of those who bear the country’s security burden. Who knows? This push could open up the possibility of more ultra-Orthodox men eventually integrating into the IDF. Maybe the security situation in Israel will bring about real changes to deeply held beliefs about how the sector might share the security burden, and maybe it will succeed where no political or media pressure ever could.