An inside look at IDF's 'faith-driven' warriors

The IDF and Israeli society as a whole must cope with religious-Zionist commanders, who perceive fighting terrorism in Gaza as a divine decree, thus reshaping the military ethos. 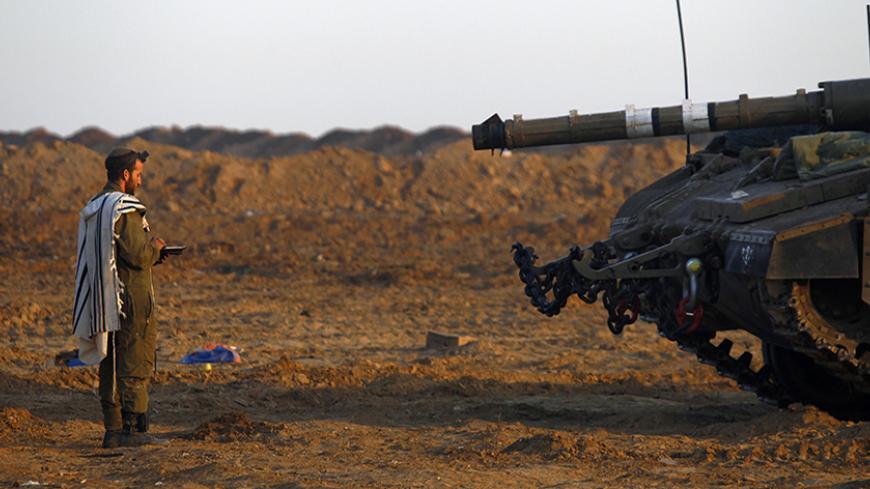 An Israeli soldier prays by a tank at an Israel Defense Forces (IDF) staging area at the central Gaza border, Nov. 21, 2012. - REUTERS/Yannis Behrakis

An Israel Defense Forces (IDF) spokesman made every effort on the evening of Aug. 10 to distance Col. Ofer Winter, commander of the Givati Brigade, from the strange decision to replace singer Sarit Hadad with Moshe Peretz at a performance before the troops from the brigade, who had fought in the Gaza Strip during Operation Protective Edge.

The performance in question was a special concert, scheduled to take place before 5,000 soldiers next week at a gathering of the Givati Brigade. Hadad accepted the invitation to volunteer a performance, but on Sunday it was announced that Peretz, and not Hadad, would appear in the concert. Army sources claimed that the decision was made by the brigade’s commander. Winter, an Orthodox Jew, refused to allow a woman to perform before his troops, so Hadad was replaced by Peretz.

In other words, this is yet another case of female exclusion in the IDF. What makes this case different, however, is that this time, it was reportedly led by one of the most senior officers in the army's combat forces.

In a meandering and unconvincing response, an IDF spokesman claimed that Peretz was the more popular artist among the troops, and that Winter did actually look into a joint performance by him and Hadad, but that in the end, such a performance was impossible for technical reasons.

It is unclear what could be so hard about organizing a joint concert for two performers on a single stage. Unless, of course, this was an attempt to whitewash Winter’s decision, which was supposedly the result of him being a religious man. With his faith being an integral part of how he perceives his role in the army, he has no qualms about trampling the universal and stately values upon which the IDF was built in the event that these conflict with his religious beliefs.

As a brigade commander, Winter was the one who gave an official battle order to his troops, writing, among other things: “History has chosen us to spearhead the fighting (against) the terrorist 'Gazan' enemy which abuses, blasphemes and curses the God of Israel’s (defense) forces,” and, “I look up to the sky and call out with you, 'Hear O Israel, the Lord is our God, the Lord is One.' God of Israel, make our path successful as we go and stand to fight for the sake of your people of Israel against a foe which curses your name.”

What is especially disconcerting about this text is not its use of the “Shema” prayer (“Hear O Israel”) or even the religious tone of the message, delivered just before the troops went into battle. It is the fact that Winter considers the fighting in Gaza to be a religious war against an enemy that blasphemes against God. In the heat of the battle in Gaza, with so many troops dead and wounded, there was no serious public media debate about the messianic rhetoric from the commander of an infantry brigade before going into battle — a rhetoric in which he turned the war on terror into a war to sanctify God’s name.

Obviously, this was not some slip of the tongue. Winter never expressed any regrets over it. On the contrary, he stood behind his statement in an interview that he gave to the ultra-Orthodox weekly Mishpacha (Family). In that interview, readers were exposed to the very depth of his worldview, by which war is, first and foremost, a religious issue. Winter told the interviewer about a miracle that happened during the fighting near Khuza’a, a village in the Gaza Strip, saying it was unlike anything he had ever seen throughout his military career. According to him, “clouds of glory” appeared, and a thick mist hid his troops from the enemy. Winter believes that this was a case of divine intervention, intended to ensure his force’s victory in battle.

Winter is undoubtedly one of the most interesting people to emerge from Operation Protective Edge. It was because of him that the public was suddenly made aware of “faith-driven” soldiers in the IDF. They do not gauge their military service by basic army values, such as defending the homeland, but consider it as a sort of a divine commandment.

Operation Protective Edge proved that the IDF is still a melting pot, bringing together children from the affluent suburb of Savyon and the neighborhoods of north Tel Aviv, towns in the periphery, and the socialist pioneering villages and kibbutzim. The religious Zionist sector is part of that mosaic. This runs counter to the belief that religious Zionists and Russian immigrants make up the backbone of the army’s combat force.

The issue at stake is that a group of “warriors in the name of God” has emerged among representatives of religious Zionism in the IDF combat force, with Winter being the most senior officer among them. The IDF will have to examine the significance of this phenomenon, once the fighting is over. While there is currently no diplomatic process underway that could lead to the evacuation of settlements, the question of what someone like Winter will do when the order is given to evacuate settlers from their homes should be an issue of concern to the top brass of the IDF. It is also a question that Winter and other officers like him will have to answer should their military careers take off.

Winter is the most successful alumnus of the pre-military religious academy Bnei David, in the settlement of Eli. The school, which is a product of the Mercaz HaRav rabbinical college (considered the spiritual nest of religious Zionism), was founded in 1988 to enable young religious men to serve in the army out of deep religious sentiments rooted in the teachings of the Torah. A more long-term goal of the academy was to replace the military elite at some point in the future.

In Winter’s case, the senior officer seems to be acting in defiance of the organizational culture of the IDF, including the official status of the IDF as an arm of the state. Religious opinion-makers could easily claim that criticism of Winter originates in religious persecution, but that is a populist oversimplification of the affair. It resembles the reaction of the IDF spokesperson over the exclusion of Hadad — a decision that, at face value, seemed to exemplify a rejection of the value of integrating women into the IDF.

Other highly regarding and outstanding senior officers who are also religiously observant include the former Deputy chief of staff Yair Naveh, reserve Gens. Amir Dror and Elazar Stern and the former commander of the Matkal elite Commando Force Hertzi Halevy. Yet, none of them was ever at the center of a similar incident. Perhaps that is because they acted according to the accepted values and norms of the IDF, and did not attempt to insert a faith-based ethos into their military service.

“For years, the people in the Mercaz HaRav rabbinical college have believed that secular Zionism played a significant role in building up the country, but secular motivation is not enough, over time, to keep the coal burning,” says Yair Sheleg, a researcher of religious Zionism at the Israel Democracy Institute and himself a religious Zionist. “Theirs is a very focused approach, intended to prepare the future generation of senior IDF officers. They consider Winter, a graduate of one of the academy’s first classes, to be evidence of their success.”

According to Sheleg, one factor that contributed to the success of the pre-military academy in Eli, which went on to lay the groundwork for dozens of similar religious pre-military academies, is some post-Zionist trends among certain secular sectors of the population. “There was a feeling that the secular settlement movement had grown lax in its commitment to military responsibilities, so religious Zionist leaders got up and said, 'We will replace them.' To do this requires religious motivation in the spirit of the writings of Rabbi [Abraham Isaac] Kook, who spoke about how the secular spark will not last long. In other words, Zionist nationalism will not withstand the test of time if it is not led by religious Jews.”

Al-Monitor:  Was there any talk of raising a new political leadership from the ranks of these religious senior officers?

Sheleg:  Absolutely. In general, people from the Mercaz HaRav rabbinical college strive to be leaders in all fields. To a large degree, they have already succeeded in the first stage. Just a few years have passed and an alumnus of the pre-military academy is already the commander of an infantry brigade. It is reasonable to expect that a future chief of staff emerging from the academy would be an aim. From there, they would be able to infiltrate the country’s political leadership, just like secular officers do. 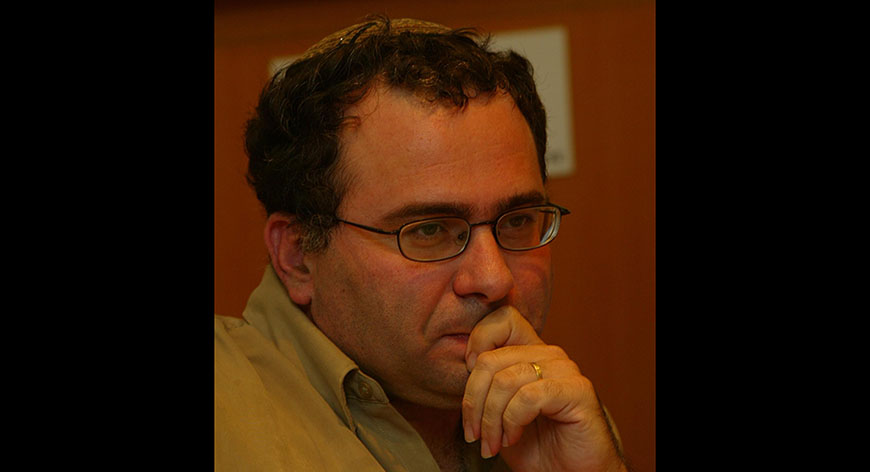 Yait Sheleg, a research fellow at the Israeli Democracy Institute and a long-time Israeli columnist, 2014

When this began, there was a lot of anxiety among the secular population. This could be seen in articles in the press, which raised the concern that these soldiers would be subject to the orders of their rabbis first and foremost. These concerns were exaggerated, certainly when it comes to the type of religious Zionism represented by the Bnei Akiva [national religious] youth movement. Besides, after so many years in the army, these people undergo a process of socialization and incorporate the army’s norms.

Al-Monitor:  It would seem as if this is an incubator for officers to refuse orders when the time comes, and they are instructed by the country’s political leadership to evacuate settlements.

Sheleg:  Maybe in the lower ranks, where the officers are still young. We hardly heard of any officers refusing to obey an order during the disengagement from Gaza [2005] or the evacuation of the Amona outpost [2006].

Al-Monitor:  Can you be certain that an officer like Winter will not be a problem when evacuating settlements?

Sheleg:  I can’t tell. It is hard for me to penetrate the innermost recesses of his soul. At the same time, however, I am not saying that it is not a possibility. Winter’s case is problematic, because his battle order effectively redefined the war’s objectives. I consider it problematic that he allowed himself to do that just before leading his troops into battle. At the time, he should have tried to garner as broad a consensus as possible. I think it should have been made perfectly clear that what he did is not the norm in the IDF.