After attacks in Jerusalem, fears grow of religious war

Palestinians believe Israel is threatening to ignite a religious war between Palestinian Muslims and Israeli Jews, taking advantage of the unrest in the Arab and Islamic world. 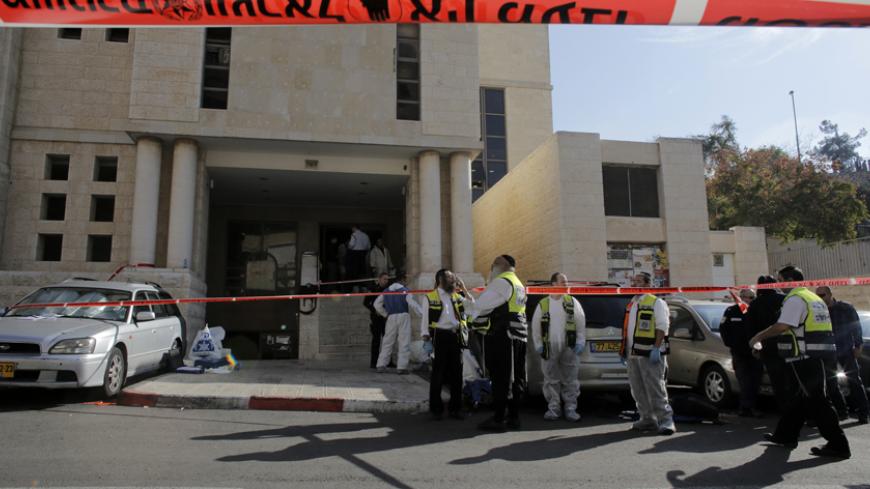 Members of an Israeli emergency response team stand at the scene of an attack at a Jerusalem synagogue, Nov. 18, 2014. - REUTERS/Ammar Awad

RAMALLAH, West Bank — An attack on a synagogue in western Jerusalem on Nov. 18 left four Israelis dead, as well as the two Palestinian perpetrators. This attack came a day after the death of a Palestinian bus driver in East Jerusalem.  According to Quds News, Israeli settlers strangled the driver, while Israeli media described the death as a suicide. Several Palestinian factions, including Hamas and Islamic Jihad, gave their blessing to the synagogue attack, which considered it a normal reaction to Israeli violations of holy sites and aggression of Jerusalemites.

During a meeting of the Fatah Revolutionary Council on Nov. 18, Palestinian President Mahmoud Abbas condemned the synagogue attack and the targeting of all houses of worship including Christian and Muslim holy sites.

On Nov. 12, settlers set ablaze a mosque in the village of al-Mughayir, northeast of Ramallah, against the backdrop of the Israeli attacks on Al-Aqsa Mosque, which have been going on for months. The incident heightened fears of a possible religious war.

Commenting on extremist Jewish groups raiding Al-Aqsa Mosque, Abbas said on Nov. 11: “The Israeli acts are leading the region and the world into a devastating religious war.” In this regard, far-right parties in the Knesset proposed laws to divide and impose Israeli sovereignty on the mosque.

Mahmoud al-Habbash, Abbas’ adviser and chief judge, explained that “the Palestinian-Israeli animosity is political and was never religious. The current violations, however, will drag the region into a world religious war.”

A Palestinian Authority (PA) official, who spoke to Al-Monitor on condition of anonymity, said that the “Palestinian warnings aim to pressure the international community into interfering and stopping Israel. [These warnings] carry concerns about Israeli attempts to turn the conflict into a religious one, which will have serious consequences, especially on the Palestinian cause. [This is particularly true] amid the war on the Islamic State (IS) in the region, and talks about the possibility of establishing a religious state.”

In an interview with Al-Monitor, member of parliament Hanan Ashrawi, member of the PLO’s executive committee, accused Israel of “dealing [with the situation] from an ideological viewpoint to impose control and sovereignty on Islamic and Christian holy sites, close the door on any political solution and fan religious strife.”

On Nov. 13, US Secretary of State John Kerry announced an agreement between King Abdullah of Jordan and Israeli Prime Minister Benjamin Netanyahu. The agreement includes steps to defuse tension between Israelis and Palestinians, and preserve the status quo of Islamic holy sites in Jerusalem.

It seems that the Palestinian warnings were well received by some European countries. During his meeting with Abbas on Nov. 15 in Ramallah, German Foreign Minister Frank Steinmeier warned of transforming the conflict into a religious one.

For his part, Secretary-General of the Islamic-Christian Committee in Support of Jerusalem and Holy Sites Hanna Issa told Al-Monitor, “The Palestinians are worried about their situation and political rights, due to the developments taking place in the world, amid the war on IS and emerging signs of a new sectarian Sykes-Picot agreement.” This means that the Palestinian cause is not on top of international priorities.

Samih Hammouda, a lecturer at Birzeit University, relayed his impressions to Al-Monitor, saying, “Palestinians are afraid of a religious war, as they would be unable to control it and tame popular angst, especially in the absence of political and diplomatic standards to confront [such a war].”

Palestinians believe that Israel is pushing for a religious war, with the extremist right wing currently ruling Israel. It is trying to build the third Jewish temple in Al-Aqsa’s place, and establish the Jewish state that Netanyahu called on Palestinians to recognize. This means expelling Palestinians from their land, and marginalizing Christians. Israel will portray the conflict as a Muslim-Jewish war by benefiting from the unrest in the Middle East.

“Israel aims to create a rift through the policy of divide and rule among Palestinians, Muslims and Christians, in historic Palestine and redefine the Palestinian entity according to religious considerations,” Ashrawi said, adding: “Israel introduced the ideological dimension to the political course. It wishes to turn us into Zionist Palestinians by having us recognize the Jewish state, which we strongly reject.”

“Israel is trying by all means to displace Christians from the Palestinian territory through voluntary migration, and push them out of the conflict, to avoid international criticism. It wants to allude that the conflict is between Muslims and Jews, and we completely refuse this approach because we, as Christians, are part of the Arab Palestinian people.”

On Sep. 16, Israel announced a decision to add “Aramaic” next to “Christian” on the identity cards of Christian Palestinians, in an attempt to recruit them in the army. The board of Catholic Churches of the Holy Land considered this an attempt to split Christians from their Palestinian roots.

Hussein believes that the unrest in the Arab and Islamic world is tempting Israel into violating Christian and Muslim holy sites, and implementing its plans to Judaize Jerusalem and expel Palestinians.

For his part, Issa believes that the Palestinian concerns emanate from Israel’s demand to recognize it as a Jewish state, which means expelling Palestinians and annulling the right of return. This is what Israel is seeking as part of its political plans, taking advantage of the situation in the Arab and Islamic world.

Although the Palestinians believe that Israel is pushing for sectarian strife, they also think that the international community will not allow for an open religious war, as the repercussions will expand beyond the region. In addition, no one can really foresee the damages it will cause.

“Despite everything Israel has done, we are sure that it cannot incite and fight a religious war as it does not have the capacity,” Issa said, adding: "Israel terrorizes people with the threat of a religious war and a Jewish-Muslim conflict. However, [Israel] cannot do so. There are about 14 million Jewish people in the world, as opposed to 1.6 billion Muslims. Israel is just trying to find excuses to control Al-Aqsa Mosque.”

“The world has gone through religious wars,” Hussein said, adding, “It now knows their effects and catastrophic repercussions on world peace and security.”