Palestinian Christians are participating alongside Muslims in demonstrations and sit-ins in Jerusalem in a show of solidarity for their cause. 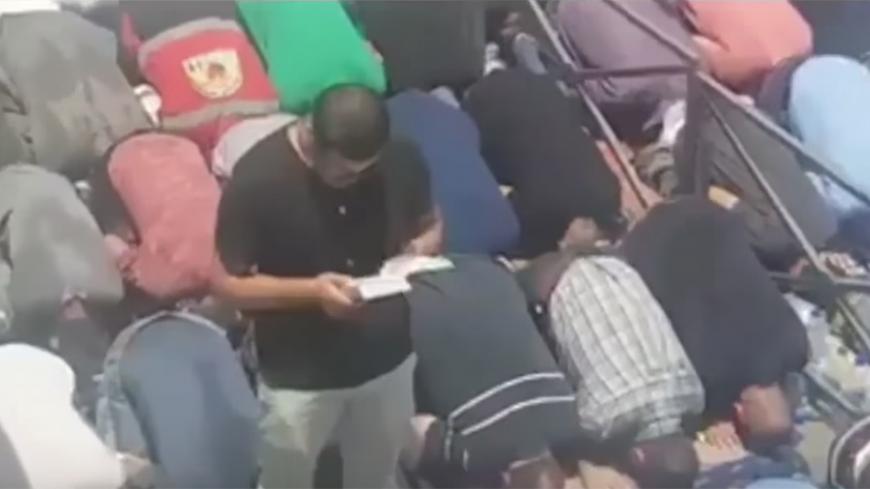 Palestinian activists saw the video as an example of coexistence between Muslims and Christians in Jerusalem and an expression of a shared fate against Israeli measures in the city.

Palestinians have been staging sit-ins for a week and a half now in the streets of Jerusalem and around Al-Aqsa Mosque denouncing Israel's attempt to install metal detectors at the entrances of Al-Aqsa Mosque to search worshippers.

Palestinian Christian youths and activists have also participated in these sit-ins to express their rejection of these measures, even though they target Al-Aqsa Mosque, a religious symbol of Muslims.

Aboud, 24, from Mount Olivet in Jerusalem, seen praying among thousands of Muslims, told Al-Monitor that he participated in the sit-in in front of Al-Aqsa Mosque as an act of patriotism. He said, “A day before the sit-in, I saw on TV an elderly Palestinian in a wheelchair crying because he was not allowed to pray at Al-Aqsa Mosque. I was deeply touched and felt I must act out to end this. This is why I decided to take part in the sit-in in front of Al-Aqsa Mosque and took my cross and Bible with me. I was there at 8 a.m. the next day in front of one of the mosque's entrances.”

Aboud noted that Israeli soldiers at the entrances of Al-Aqsa Mosque prevented him and a number of elderly Palestinians from entering the mosque and fired tear gas at them, describing the scene as “devoid of humanity and appalling.”

“Because I am a Palestinian national it is my right to defend all of my country’s religious sanctities,” he said. He noted that he was unaware media outlets were reporting live, saying, “I was thrilled with how Muslim activists and friends welcomed me among them. Their warmth was genuine, and it gave me the strength to stay with them.”

Aboud added that when they started praying, he was asked to join them. “They were very welcoming and they placed me in the center. At that moment, I began to recite Bible verses. We were all praying with great fervor,” he said.

Pointing to the efficient role and participation of Christians in sit-ins and protests around Al-Aqsa Mosque against Israeli measures, he noted, “Jerusalem needs us — even if we are a minority. The Palestinian cause needs all Palestinians. This is the land of peace.”

The participation of Palestinian Christians in Al-Aqsa protests and sit-ins is attracting media attention as it reflects the strong interfaith relations in Palestine and represents a means to promote national unity and tolerance.

Zeina Mosleh, a Christian from Jerusalem, said she participated in a sit-in with Muslims in front of one of the entrances of Al-Aqsa Mosque because she felt this was a religious duty. She told Al-Monitor, “I was shouting their slogans and distributing drinking water to worshippers and young protesters.”

She strongly rejected Israel’s measures, describing them as unacceptable and against freedom of worship. “It is not about a specific religion. We must have the courage to reject Israeli practices against one of the most important and sacred mosques for Muslims,” she said.

Hanna Issa, a Palestinian Christian historian and the head of the Islamic-Christian Commission in Support of Jerusalem and Holy Sites, told Al-Monitor, “Israel wants to portray the conflict as a conflict between Judaism and Islam. We as Christians refuse this.”

He said, “We believe the attack on Al-Aqsa Mosque is an attack on the Church of the Holy Sepulchre. Relations between Muslims and Christians in Palestine are governed by Umar's Assurance of Safety that we believe is tantamount to a constitution. Churches in Jerusalem are adjacent to mosques. We respect Ramadan, they respect our fasting, and we exchange visits on religious and national holidays.”

The Church of the Holy Sepulchre is one of the most important Christian religious monuments in Jerusalem, located deep inside the walls of the Old City.

Issa asserted that Muslims and Christians share the same just cause, and that the participation of young Christian activists in the sit-in in front of Al-Aqsa Mosque is the best example of this. Commenting on Aboud’s video footage, he said, “We are all believers. There is no discrimination. We share the same sense of belonging.”

According to Issa, there are 50,000 Christians in the Palestinian territories: 47,000 in the West Bank and the rest in the Gaza Strip.

It is said that Muslim Caliph Umar Ibn al-Khattab had written to the people of Aelia (Jerusalem) upon the first Muslim conquest of the city in 638 a document in which he assured safety for their churches and properties, provided that no Jews live with them in the city. This assurance is one of the most important documents in the history of Jerusalem and Palestine.

The Israeli government decided July 25 to remove the metal detectors installed at the entrances of Al-Aqsa Mosque, only to replace them with surveillance cameras.