The PLO has served notice that passage of the Israeli nationality bill endangers its mutual recognition agreement with Israel and the foundation of the current relative peace. 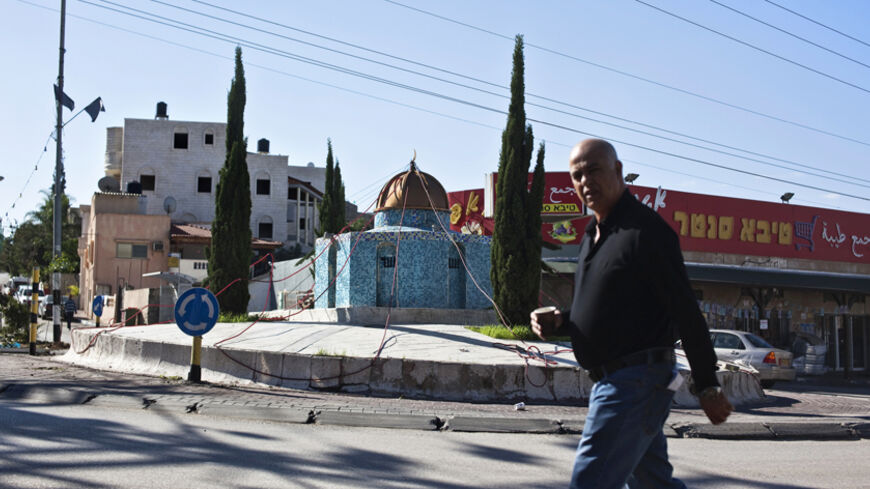 An Israeli Arab man walks past a replica of the Dome of the Rock Mosque in the Arab town of Kafr Qassem, Nov. 25, 2014. - REUTERS/Nir Elias

When former Prime Minister Ahmed Qurei and President Mahmoud Abbas, as representatives of the Palestine Liberation Organization (PLO), held secret talks with members of Israel’s Labor Party in 1993, they were dealing with a secular political party that headed a coalition also including non-Zionist religious parties. When Yasser Arafat, as chairman of the PLO's Executive Committee, signed a letter that same year recognizing the State of Israel, the secular coalition government of Prime Minister Yitzhak Rabin had not tried to define Israel as the national homeland for the Jewish people.

These documents through which the PLO and Israel officially recognized each other needed to be signed before Arafat and Rabin could publicly meet and approve the Declaration of Principles (the Oslo Declaration). Once the letters were signed Sept. 9, the two leaders met publicly in Washington, on Sept. 13, and the world witnessed their famous handshake on the White House lawn. These documents — the bedrock of the current Palestinian-Israeli agreements — are now in jeopardy. Speaking to Voice of Palestine Radio, Yasser Abed Rabbo, PLO secretary-general, used the word “dangerous” to describe the possible change in the legal character of Israel currently under discussion.

Although the issue of the Jewish character of Israel has been part of domestic debates for decades, on Nov. 23 the government of Prime Minister Benjamin Netanyahu took a legal step on the matter. In a 14-6 vote, his Cabinet approved the latest draft of a controversial 14-item bill to declare Israel “the national homeland of the Jewish people.” According to Netanyahu, the measure will give Arab citizens of Israel equal individual rights while bestowing Jews in Israel and around the world national rights, an assertion fiercely rejected by many in Israel.

The PLO Central Committee met Nov. 25 and resolved that the draft Israeli bill, if enacted, will “abolish the mutual exchange agreement reached in 1993.” The PLO stated, “The bill would legalize racialism and discrimination in all aspects of life and would constitute a continuation of Benjamin Netanyahu’s plan to transform Israel into a country that is based on racism, seeking to exploit this bill, in the name of law, to perpetuate and justify racism at the exclusion of all others.”

In Israel, opposition to the draft law has not been confined to non-Jewish citizens. Attorney General Yehuda Weinstein has come out against the measure and Justice Minister Tzipi Livni of Hatnua and Finance Minister Yair Lapid of Yesh Atid, the leaders of Netanyahu’s two major coalition partners, voted against it in the Cabinet. Livni and Lapid's fellow party members in the Knesset will no doubt join them in voting the same way, if it ever gets to that stage. Their opposition might be one reason the Knesset vote was postponed until early December.

While some might argue that the “Jewish state bill” mostly deals with the rights of the citizens of Israel, there is no doubt that in the contentious Palestinian-Israeli conflict, in which issues of religion and nationalism are hot button items, such a public shift in the character of Israel will have an effect on its relations with the Palestinians, its other neighbors and the international community. The New York Times published a Nov. 25 editorial headlined “Israel narrows its democracy,” which stated, “Having experienced the grievous legacies created when a government diminishes the rights of its people, we know this [is] not the path that Israel should take.”

In the midst of the most recent negotiations with the Palestinians, Netanyahu had tried to introduce a public declaration of the Jewishness of Israel as a condition the Palestinians had to meet. The Palestinians pointed out, however, that the issue had not even been agreed upon in Israel and was not cited in the United Nations’ official characterization of Israel when it recognized it in 1948.

By putting the mutual recognition issue on the table, the PLO is trying to send a clear message to the international community about the disastrous effects that passage of the Israeli measure will have on the future of the peace process and the nearly dead two-state solution. Palestinian leaders are hoping that international pressure and concern about further international isolation of Israel will lead sane Israelis to reject the dangerous right-wing direction that the pro-settler government is taking.

Jewish religious parties have always constituted an integral part of Israeli governments. The difference now is that the earlier religious parties were mostly of the non-Zionist, Haredim order primarily concerned about funding for their religious schools, but the current crop of religious parties in the government are right-wing extremists whose prognosis for resolving the conflict with the Palestinians is both clear and frightening. In October, they almost brought the region to the brink of religious war with provocative actions at Al-Aqsa Mosque, and they now appear set to destroy whatever is left of the detente with the Palestinians.

Israel's current efforts to put Jewishness above democracy will seriously threaten its place in the world and its relative peace at home. The statement from the PLO shakes the very foundation of a 21-year agreement that has attracted international support and brought about relative peace (through security coordination) to Israelis. It is too early to tell whether the PLO's statement was merely to put its opposition on record or if it is the first step in a serious effort to internationally discredit the troubling Israeli bill. For example, in regard to the latter, might the PLO come out in public support of the Boycott, Sanctions and Divestment campaign as a way for international supporters to express their anger toward Israeli actions?

If the Israeli bill is passed, a much more serious move by the PLO and the current Palestinian government would be expected: revising the current security relationship between the Palestinian Authority and Israel that includes regular and well-recognized coordination on intelligence as well as security. By publicly and forcefully speaking out against the racist Israeli bill, the PLO has set itself on a collision course with either Israel or its own people, who will not allow it to continue to appease the Israelis on the ground while attacking them rhetorically.