Iraq's one too many holidays

Economists are warning Iraqi policymakers that the large number of official and unofficial holidays is crippling the economy against a backdrop of governmental indifference. 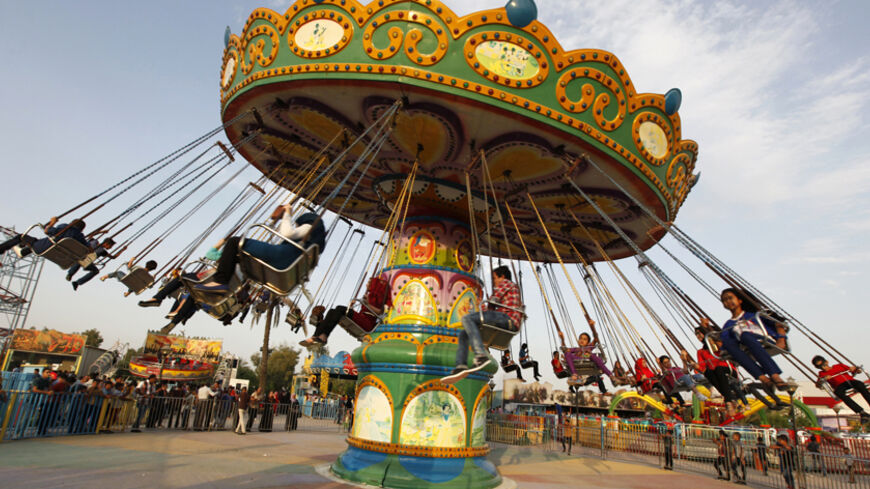 Residents take a ride at an amusement park as they celebrate the Muslim festival of Eid-al-Adha in Baghdad, Oct. 5, 2014. - REUTERS/Ahmed Saad

Given the many official and unofficial holidays in Iraq, the country seems to be almost on permanent vacation throughout the year. Schools find themselves unable to complete their curricula, while economists warn against a recession due to the excessive number of holidays. Iraq recognizes 150 official vacation days, which is equivalent to one-third of the year, according to a law that was passed by the Iraqi parliament in April 2013.

According to this law, some cities with religious affiliations such as Karbala, Najaf and Khadimiya are allowed to determine their own holidays, and thus the number of vacation days.

In addition to the large number of holidays in Iraq, time off can sometimes extend for longer periods than specified by the law, as happened at the beginning of November. For 2014, the Iraqi parliament had approved six days for Eid al-Adha, yet the holiday lasted seven days, and since Eid started before the weekend, the holiday actually lasted 10 days.

As for Ashoura — which commemorates the death of Hussein ibn Ali, the third of the twelve Imams in Shiism — the commemorations that started on Nov. 3 will last for 40 days, during which many streets and squares are closed, and most government departments and schools are quasi-closed, especially in the Shiite-majority cities in the south.

The large number of days per year schools and universities in Iraq are closed has a negative impact on teachers and students alike, causing educational levels to deteriorate significantly. Schools fail to complete their curricula and students receive a minimal education that is insufficient to develop their skills.

In a telephone interview with Al-Monitor, teacher Khawla Maksad expressed her irritation with the decline in the educational level of students, which she attributed to many reasons but mainly to the large number of official and unofficial holidays.

"The educational level in Iraq is generally weak, as the school hours are few and schools are not equipped with modern educational tools. This is not to mention the frequent official and unofficial holidays that make matters worse," she said.

The Ministry of Education is well aware of this predicament but does not have any solutions to offer. Maksad confirmed that she and fellow teachers raised this issue and organized petitions presented to the ministry, demanding improvements at the educational level and addressing the issue of frequent holidays — but to no avail. According to Maksad, many students are not qualified to move to the next class level, but the Ministry of Education's standards allow unqualified students to pass.

The media has been reporting that Iraq ranks first in the world in terms of highest number of vacation days per year.

The frequent holidays also have a negative impact on other industries such as the media, which has to deal with the frequent closing of printing presses and the present depression in the media markets.

This situation is adversely affecting the economic sector, too, as Iraqi economists are warning against a recession due to frequent market disruptions. In this context, economic expert Bassem Jamil Antoine said that Iraq is losing $150 billion a year, which is equivalent to $1 billion per vacation day, given the high frequency of holidays.

In a telephone interview with Al-Monitor, Ali Hassoun, a member of the Education Committee in the previous parliament that approved the law on official holidays, said that the number of holidays — which has had much media attention lately — is exaggerated, and that Iraq is not the country with the highest number of vacation days.

Hassoun attributed the large number of holidays to the complex social structure in Iraq, as it comprises many different religious, sectarian and ethnic components that all want to celebrate their own holidays.

Despite the adverse effect of the frequent holidays on the overall activity of the country, the Iraqi governments of late do not seem interested in finding serious solutions to this problem.

It appears that the issue of holidays is part of a system that characterizes the political process in Iraq, with each religion, sect, minority and ethnicity advocating to have their religious celebrations recognized as official holidays.

"Although these holidays disrupt work in the state departments and the services and construction sectors, there is no agreement — or rather there is a big dispute — within the Iraqi parliament to address the problem and find adequate solutions," Hassoun said.

The issue of the number of holidays in Iraq is one of the strangest problems a country could experience, with its obvious adverse repercussions. However, religious Iraqis are not likely to agree on this issue and continue to lobby to have their own holidays recognized.

Yonadam Kanna, chairman of the parliamentary Labor and Social Affairs Committee, stressed that this problem is much bigger than imagined, as Iraqi workers do not work more than 48 days per year — negatively impacting development and state-building — as opposed to averages of 150-280 working days a year in other countries.

Although Iraq is in need of an inclusive reconstruction process, the many holidays — especially the religious ones — stand in the way of the country's construction and development, and it poses risks to security and educational levels, too. This situation thus requires serious consideration that bears in mind the best interests of the country, not those of conflicting religious factions.