Turkey's tourism operators are overjoyed at the government decision to extend the Eid al-Adha break to 10 days, but exporters are furious at the potential loss in overseas business. 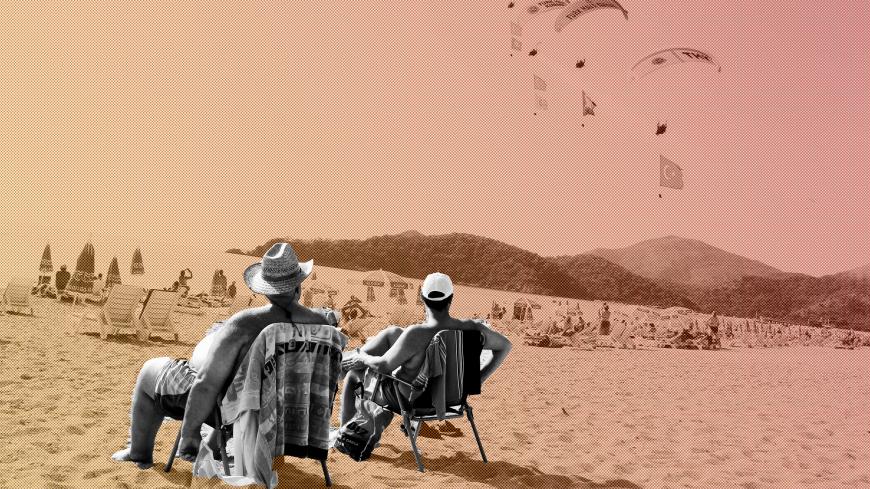 Local and foreign tourists watch the International Oludeniz Air Games as they enjoy the sunny weather on a beach in Fethiye in Mugla province, Turkey, Oct. 11, 2016. - REUTERS/Kenan Gurbuz

Turkey's tourism and export sectors are the country's leading earners of foreign currency, but recent tensions in domestic and foreign politics have led to serious problems in the sectors. Their recent dispute has centered on whether upcoming official and religious holidays should be extended.

To make up for a decline in tourism revenue, tourism operators asked the government to extend the four-day Eid al-Adha holiday to 10 days, from Aug. 26 to Sept. 4. Their hope was for at least a million Turkish citizens to take vacations in the country and generate at least $350 million in tourism revenue.

Oya Narin, the chairwoman of Turkey's Tourism Investors Association, said tourism losses could amount to $30 billion over the next three years. She noted that although the number of domestic tourists was increasing, tourism revenue continued to decline.

Official figures from the Turkish Statistical Institute confirm Narin’s findings. In the first half of 2016, the number of domestic and foreign tourists totaled 7.4 million. This year, that number reached 8.7 million, but tourism expenditures per person regressed from $655 to $611.

The dispute over extending the Eid al-Adha holiday further provoked disagreements within the government. Foreign Minister Mevlut Cavusoglu, who also represents in parliament the Turkish resort town of Antalya, favored an extension in order to boost tourism — a move that would please his constituents. Minister of Economy Nihat Zeybekci — unsure of the opinion of President Recep Tayyip Erdogan — took a more cautious approach, though he did say that “Turkey needs more [time] to work, to produce and to export rather than go on holiday.”

Before the Council of Ministers made a decision on the extension of the Eid al-Adha break, Erdogan issued his opinion, saying, “If the situation is suitable, it would be good for tourism.” With this, he essentially backed the tourism operators and told the ministers how to vote.

Government spokesman Bekir Bozdag then announced that Eid al-Adha would be celebrated for 10 days. This means that 3.2 million civil servants will be on official holiday leave during that time, and that government offices and local administrations will be closed. The decision, however, doesn’t apply to private sector workers and businesses.

Exporters reacted bitterly to the decision. Due to the 10-day closure of government offices and customs facilities, exports cannot be processed and shipped. Turkish exporters fear that foreign customers of Turkish exports are likely to divert their orders to other countries.

Buyukeksi lamented the negative effects of lengthy holidays on exports. Since the number of official working days are reduced, exports cannot be processed and this results in both a monthly and annual decline. The TIM president said that the real decline in exports last year was not caused by the failed coup of July 15 but by the extension of Ramadan holidays from three to nine days. Likewise, he said the September 2016 decline in exports was due to the extension of the Eid al-Adha holidays from four to nine days.

Since this year's holidays stretch from August to September, export totals from both months will experience a decline.

Since 2012, Turkish exports appear to have been static at $150 billion annually. The $500 billion goal set for the Republic’s 2023 centenary seem unreachable. Last year, the estimate for annual exports was $200 billion, but it remained at $142.6 billion.

Instead of extending holidays, industrialists and exporters say the focus should be on attracting foreign tourists. Experts say that, with domestic tourism, the money made goes from one pocket to the other, with little impact on the economy, meaning that foreign tourism brings in more valuable currencies.

Curiously, industrialists, exporters and tourism operators — all of whom suffer economic hardships — attack each other instead of the government. Nobody admits that most of Turkey's export markets have been squandered because of misguided and aggressive foreign policies. Tourism operators don’t complain that millions of tourists have bypassed Turkey due to our constant and, at times, unpleasant bickering with Russia, Germany and the EU. Businessmen and companies fear government intimidation and prefer to squabble among themselves instead of taking up their grievances with the government.

Victory Day has always been an important Turkish holiday. Aug. 30 marks the anniversary of the Turkish Armed Forces' conclusion of the War of Independence. In 2015, the celebrations were canceled due to terror incidents. Last year, they were skipped because of the coup attempt. This year, the holiday was incorporated into Eid al-Adha to make the 10-day extension possible. Victory Week celebrations, which traditionally begin Aug. 26, have thus been bypassed for three years, but Erdogan did not forget to announce that, henceforth, Aug. 26 will be observed as the anniversary of the Turks' victory over the Byzantine Empire at the Battle of Manzikert in 1071.

One gets the feeling that that these extended holidays are intended to marginalize certain national holidays, so people forget them and then adopt new holidays that are more in line with the ideology of the ruling Justice and Development Party.

by Murielle KASPRZAK and Joseph SCHMID | AFP | May 26, 2022
END_OF_DOCUMENT_TOKEN_TO_BE_REPLACED