The government in Anbar province is voicing concern about the progress of the Islamic State in several cities, calling for a quick solution to prevent the province from falling to the militants. 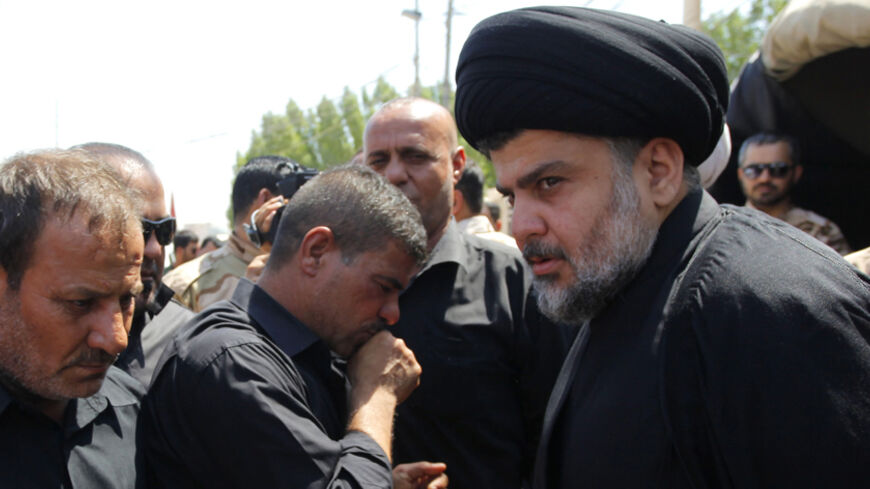 Radical Shiite cleric Muqtada al-Sadr (R) attends the funeral of fighters loyal to his Peace Brigades, who were killed when an improvised explosive device exploded near the town of Amerli, in Najaf, Sept. 3, 2014. - REUTERS/Alaa Al-Marjani

BAGHDAD — On Oct. 18, a delegation from the local government in Anbar province went to the Shiite province of Najaf to visit cleric Muqtada al-Sadr, under a media blackout. The Shiite cleric did not issue any statement regarding the visit, while the local Anbar government merely gave a standard acknowledgment of the event.

According to two members of the Anbar provincial council interviewed by Al-Monitor, the visit was the result of a coincidence; a delegation of the local Anbar government was supposed to meet Shiite cleric Ali al-Sistani, but events during the month of Muharram (the first month of the Islamic calendar) delayed the meeting.

It seemed strange for the delegation to visit the Sadrist movement’s leader, considering that Sadr does not have sway in the government to help Anbar, which has lost about 80% of its territory to the Islamic State (IS) and where several cities are threatened.

However, the head of the Anbar province council, Sabah Karhout, revealed that the meeting concerned the potential support of the 31 Sadrist members of parliament for moves that could save Anbar, as well as the entry of foreign troops into the province.

Karhout told Al-Monitor by phone, “Only two options can solve the Anbar crisis. The first is the entry of US troops to Anbar to fight IS — whose criminal acts are on the rise — and the second is the enactment of a law [to form] the National Guard, which allows tribal fighters to take up arms and receive salaries and turns them into a local force capable of expelling IS from Anbar.”

Sadr, whose supporters fought the US occupation forces 10 years ago, are the most opposed to the entry of foreign troops into Iraq. In fact, Sadr had threatened that he would reconfigure armed factions to fight foreign troops in the event that ground forces intervened in fighting IS.

Sunni politicians in the provinces of Anbar and Salahuddin, which are experiencing heavy fighting after IS dominated large areas, demanded the return of US soldiers for the liberation of cities where the organization is committing great crimes and where taxes are being imposed.

The policy of Sadr — whose supporters fought amongst one another for nearly two years — was said to take a moderate turn in dealing with minorities in Iraq, especially the Sunnis. Sadr said that former Prime Minister Nouri al-Maliki's policy made ​​them fall prey to Sunni and Shiite extremism.

On Sept. 15, Sadr called on the Iraqi government “not to resort to the occupier, whoever it was, even if it is under the pretext of fighting IS,” and went so far as to describe IS as “a product fabricated by the United States and its colonial and deconstruction mentality.”

Sadr was the first Shiite politician to refuse the return of foreign troops into the country. In the event of the intervention of US forces, he called on the men fighting under the name of Saraya al-Salam (Peace Brigades) in IS-controlled areas to “withdraw from those areas as soon as possible.” He said, “Resorting to a tyrant to face another tyrant is forbidden.”

Karhout declined the entry of Shiite militias fighting alongside Iraqi security forces to Anbar province and said, “About 20,000 tribal members are fighting IS.” He stressed, however, that these “do not have the required reinforcement and they need governmental support.”

Karhout, who described his meeting with Sadr in Najaf on Oct. 19 as “fruitful,” added, “The debate with Sadr about the entry of US troops is still in progress. … Sadr did not categorically reject their entry into Iraq.”

Athal al-Fahdawi, a provincial council member from Ramadi, said in an interview with Al-Monitor, “Sadr categorically refused the return of US ground troops to Anbar, and Sadr even refuses the entry of US warplanes bombing IS in Iraqi cities.”

According to Fahdawi, the Shiite leader “promised to share the weapons owned by the Sadrist factions with the fighters in Anbar to expel the IS guerrillas” from the province, where there is daily fighting between the army and the extremist elements of the organization.

The Anbar government is voicing concerns over IS’ progress in several cities, insisting on coming to a quick solution to prevent the fall of the province in the hands of IS.

Fahdawi said, “We need US ground forces, or let the government give us the Apache aircraft capable of securing air coverage for the protection of our tribal fighters.”

The Iraqi government, whose President Haider al-Abadi rejects the entry of foreign ground troops into Iraqi territory, does not have the choice but to negotiate with tribal clans in Anbar to help the Iraqi security forces expel IS from the cities it controls.

Abadi and his government intensified meetings with Iraqi figures living in Jordan and in Baghdad to reach an agreement about the recruitment of tribal members in the fighting, but those meetings have not yielded any disclosed agreement.

“The events on the ground are accelerating and should be addressed with the same pace to repel the attacks.” Meanwhile, Fahdawi saw that “the IS threat must be faced with a lot of support from the central government,” Karhout said.