Iran's private sector has high hopes for a comprehensive nuclear deal, as it predicts economic growth and stability as the outcome. 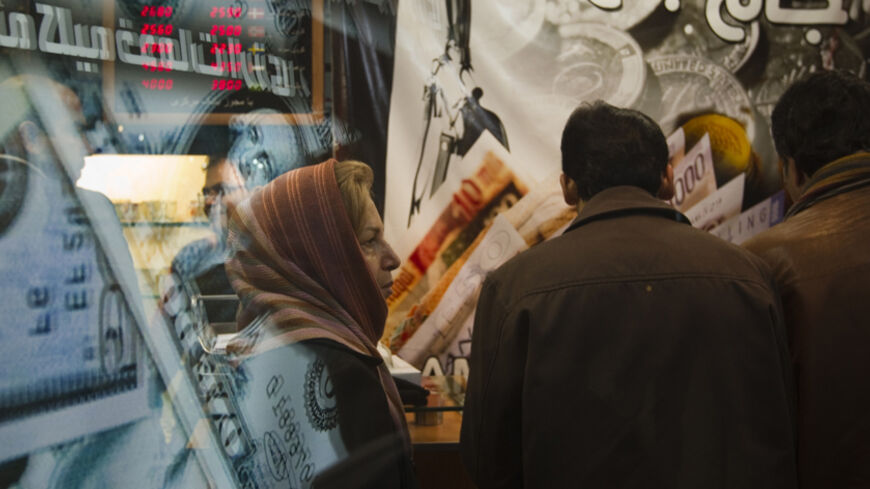 While international businesses are waiting to see what will emerge from the nuclear talks in Vienna, Iran’s business community remains more optimistic about the outcome of the negotiations, though, in its own right, the country’s private sector is also in a wait-and-see mode.

There are a number of ways to gauge the expectations and perceptions of the Iranian business community, but the movements in the free market value of the US dollar are usually an accurate reflection of the overall trends. A closer look at the fluctuations of the free market exchange rate (graph below) in the past few months indicates that there is no anxiety in the hard currency market, and by extension, within the business community. Essentially, despite an inflationary environment, the Iranian rial has roughly maintained the same value that it had in September 2013, before the signing of the interim nuclear deal in Geneva.

The slight upward trend of the past three months can also be explained through two factors: the falling oil prices and the devaluation of the euro against the US dollar, which, as an important portion of Iran’s currency basket, relates to the euro as a reference currency. In fact, the country’s official exchange rate also experienced a devaluation by about 5% in the past few months and now stands at 26,789 rials to the US dollar. Going back to before the June 2013 presidential elections, one could clearly identify the anxieties of the business community in the fact that the free market rate of the US dollar went as high as 40,000 rials — 3.5 times that of the official exchange rate of 11,000 rials.

Interestingly, a large segment of the business community believes that the free market rate of the US dollar will fall, should there be a comprehensive nuclear agreement Nov. 24. Nonetheless, there is no panic sale of hard currencies, which indicates that the expectations are balanced. These expectations have been voiced through different channels, and a number of meetings have also taken place between private sector representatives and government officials to gauge the concerns of the private sector in potential scenarios that may emerge after Nov. 24.

Interestingly, the views that have been communicated from private sector players point to a positive outlook. The dominant perception is that a comprehensive nuclear deal will lead to economic growth, an increase in domestic production, downward price adjustments and economic tranquility.

Majid Reza Hariri, head of the import commission in the Iran Chamber of Commerce, Industries, Mines & Agriculture (ICCIM), believes Iran’s business community would like to see sanctions-free interaction between Iran and the rest of the world, and that “political confrontation should not lead to economic sanctions.”

Mehdi Pourghazi, deputy head of the industry and mining commission at ICCIM, predicts that a nuclear deal will strengthen the Iranian rial, and “this will encourage the private sector players to become more active in the economic field.” He added: “A nuclear deal will improve business conditions and lead to more foreign investment in the economy, while it will reduce the costs to manufacturers, as they would be able to import the needed materials more easily.”

Other optimistic private sector players point to the fact that a nuclear deal would allow the private sector to become more competitive in the Iranian market. Fact is, the sanctions of the past few years have severely undermined private sector companies in Iran and have paved the way for the stronger governmental or semi-state institutions to benefit, as they could adapt more easily to the external restrictions.

There are also some pessimistic voices. Hossein Hosseingholi, head of the Association of Zinc and Lead, does not believe in a comprehensive agreement. “Even if there is a deal, that will strengthen the value of the rial and make Iranian exports more expensive on world markets.” Other stakeholders are pessimistic because they distrust the intentions of Western governments. For example, Mohammad Hossein Barkhordar, a board member of the Tehran Chamber of Commerce, believes that “Western governments do not wish to allow powerful countries like Iran to develop and progress.”

However, some stakeholders, such as Mohammad Hossein Zehtabchian, head of the Association of Industrial Exporters, are worried that a rapid opening of the Iranian market to foreign investors would undermine the domestic industry, as international competitors would flood the market.

While perceptions and expectations are very diverse, there is no doubt that the overwhelming majority of corporate Iran wishes to see an end to the current uncertainty. One of the disadvantages of the current wait-and-see mode is the fact that very few transactions are taking place in major markets. The housing sector has been stagnant because many players are waiting for the outcome of the negotiations. Investors are hesitant since a positive or negative outcome of the negotiations will change the overall economic dynamics one way or the other. This may be the reason why the powerful Tehran Chamber of Commerce head Yahya Ale-Es’hagh, recently stated: “In the past 30 years, Western governments, especially the United States, have put a lot of pressure on Iran, and even if the outcome of the negotiations is not positive, the situation won’t get worse. Nonetheless, the likelihood of a positive outcome is very high.”

Furthermore, government spokesman Mohammad Baquer Nobakht has commented that the government is prepared for all possible scenarios. Evidently, as some of the concerns of the private sector indicate, the government will have to manage expectations and engage in proactive policies in the result of either scenario. Should there be a positive announcement on Nov. 24, the government will have to pace the opening of the market to foreign investors and also manage the exchange rates in a way that the domestic industry, as well as exporters, do not feel vulnerable. In addition, in case the announcement on Nov. 24 is perceived negatively, the government and the central bank will have to contain the potential repercussions for the free currency market and the overall investment climate.

In the midst of all the uncertainties currently undermining economic activity in Iran, two things are certain. First, the main expectation of the domestic private sector is for the government to provide stability and sustainability with regard to currency value and trade and investment policies. Second, the Iranian economy as a whole will find ways to adapt to the new situation, no matter the outcome. There will be winners and losers, but the overall balance should be positive for a country like Iran, with its diversity of economic activity and natural and human resources, especially as many Iranian companies are ready to go international through increased interaction with international partners. Such an outcome would certainly empower the private sector in the medium term — itself a facilitator of moderation and development.