In an interview with Al-Monitor, Israeli Democracy Institute President Yohanan Plesner argues that the proposed nationality bill would project the image of a state where democratic values are eroded and non-Jewish citizens are not seen as equal to Jewish ones. 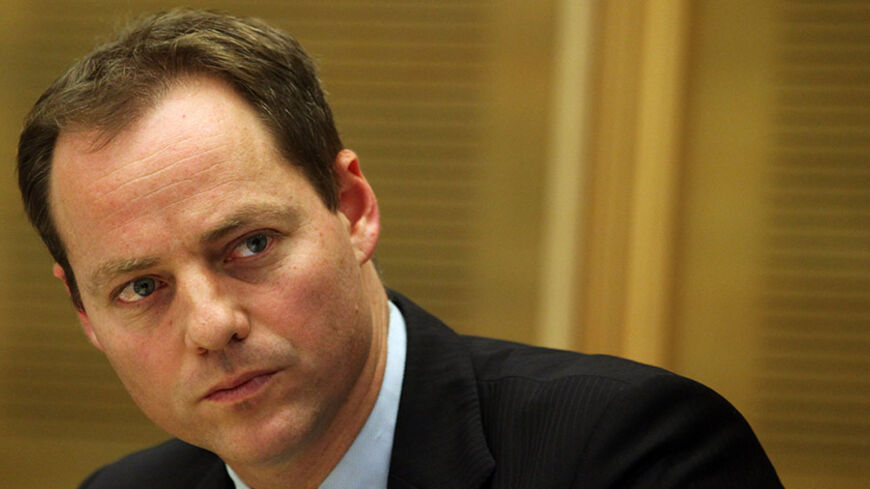 Yohanan Plesner, president of the Israel Democratic Institute and former Knesset member for Kadima, at a news conference, 2014. - IDI

Based on the number of calls that Israel Democracy Institute (IDI) President Yohanan Plesner has received from the foreign press over the past few days, it seems that the nationality bill garners much interest outside of Israel, too.

Plesner, who fought with an elite Israel Defense Forces (IDF) unit and later served as a Knesset member for the Kadima Party (2007-13), found himself torn between his almost instinctive desire to defend the state and his realization that the nationality bill, which was passed by the government on Nov. 23, is unnecessary and would seriously undermine Israel's character as a democratic state.

Plesner has been interviewed by countless media outlets, including The New York Times, The Wall Street Journal and Canadian television. Based on the general tone of these conversations, it seems that the Western democracies are distressed by the fact that Israel is legislating laws that would exclude the Arab minority and erode the democratic nature of the state.

The nationality bill that Prime Minister Benjamin Netanyahu insists on bringing before the Knesset, even though it could lead to the dismantling of his coalition and early elections, is the kind of bill that puts the IDI into “emergency mode.” In other words, the IDI is calling up all its informational, research and public resources to stop the bill before it is enacted. The same thing happened quite a few times over the past few years because of other problematic laws proposed by Knesset members from the right. Some of these laws attempted to limit the power of the Supreme Court, while others tried to put a cap on contributions to nonprofit groups affiliated with the left. During the recent presidential election, there was even an attempt by the prime minister himself to change the President of Israel Basic Law to prevent President Reuven Rivlin from being elected.

Nevertheless, the nationality bill is considered especially troubling. Perhaps it is because Netanyahu is putting all his power and influence behind it as part of a political agenda, at a time when the level of tension between Arabs and Jews is breaking new records.

“When I was a Knesset member I was constantly shocked by how easy it is to change the rules of the game, and how quickly we could have a completely different country. After all, laws concerning boycotts, legislation overruling the Supreme Court and limits placed on freedom of expression can all be passed with a simple majority in the Knesset and its committees, making it possible to introduce fundamental changes to both the Jewish and the democratic nature of the state. That is why even people with no formal role in the political system cannot remain apathetic to this law,” Plesner said in an interview with Al-Monitor.

Al-Monitor: To what degree should we be bothered by this specific law, on the background of a continuum of anti-democratic legislation that has overwhelmed us over the past few years?

Plesner: Ostensibly, this law comes to determine that the State of Israel is the nation-state of the Jewish people, but that particular characteristic is already determined by the Declaration of Independence, our Basic Laws including “The Law of Human Dignity and Liberty,” court rulings and state symbols such as the national anthem. As such, there is no doubt that Israel is the nation-state of the Jewish people, and therefore this law is completely unnecessary. There are many other ways to strengthen the Jewish component of the state, through the education system, for instance. The nationality bill, on the other hand, poses a real and tangible danger, even in its toned-down version, because it is intended to reduce and subjugate the state’s democratic foundation and the principle of equality to the state’s Jewish identity.

Instead of engaging in a long process of consultation with the non-Jewish population before such a sensitive law is passed, it is being rushed through during an already tense period. They insist on passing a divisive law, which could increase unrest and outrage within the State of Israel.

I believe that elements across Israel’s civil society, its public institutions and academia all have a responsibility to voice their protest and dissent at this time, to prevent such a dramatic change, especially one that we will all regret later.

Al-Monitor: Most of the Jewish public doesn’t understand what all the fuss is about. As the prime minister says, ostensibly the law is necessary because so many are challenging the Jewish character of Israel as the nation-state of the Jewish people. What then is the damage that this law causes?

Plesner: First and foremost, it is harmful in the way that it affects citizens who are not Jewish. Israel is home to over 1.5 million non-Jewish citizens, including Druze and Bedouins, who serve in the IDF and have tied their fate to the State of Israel. Furthermore, there are another 300,000 immigrants from the former Soviet Union who are not Jewish according to the interpretations of Jewish law. The message that this law sends to those populations is that while they may be citizens, they are of lower standing in the country. That is obviously detrimental to the principle of equality.

Furthermore, the law is harmful on the international level, among countries considered as Israel's friends. Over the past few days, I have encountered very harsh reactions from overseas. Everyone is very concerned about the erosion of the democratic foundation of the State of Israel. After all, the alliance we have with those countries is based on our shared liberal-democratic values. The erosion of these values could have a strategic significance on how Israel is perceived, among Israel’s closest allies. Furthermore, a large part of Diaspora Jews identifies with Israel specifically because it is both a Jewish and a democratic state. Those two elements must never be separated.

Such a position was recently expressed in the 2014 Annual Report of the Jewish People Policy Institute, which shows that most Jewish leaders place considerable importance on maintaining Israel as a Jewish and a democratic state. In fact, they see the democratic component as no less Jewish in character than the Jewish component. As such, the nationality bill constitutes a serious blow to the Jewish essence of the state.

Al-Monitor: You spent six years serving in the Knesset. Now that you are an outsider looking in on how current Knesset members are behaving when it comes to anti-democratic legislation, are you able to understand this phenomenon?

Plesner: Obviously, what stands out most is the abandonment of Israel as a “democratic Jewish” state for political motives. Since the “democratic Jewish” component is perhaps the most sensitive issue in defining our identity, it should be handled with all due respect and decorum. Look at what is happening here. We wrote our Declaration of Independence in the earliest days of statehood, when the total population was just 600,000 and our tiny army was fighting against the regular armies of the Arab states. Nevertheless, that document contains universal principles reflecting the self-confidence. Now, however, when the population has grown more than tenfold, and we have one of the strongest armies in the world, should we be displaying a complete lack of confidence and demanding unbalanced and non-Zionist initiatives to define ourselves?

I think it is absurd that the political system and its leaders are focused so intently on such an unnecessary and ultimately harmful law, when there are real problems, neglected for years, which affect the day-to-day lives of all the country’s citizens. Three years ago, hundreds of thousands of people took to the streets, expecting to change the socioeconomic system. It is sad to see that what will finally bring this government down is the nationality bill, which many of those people have no interest in whatsoever.

Al-Monitor: To what degree are these legislative initiatives motivated by political interests and populism?

Plesner: Those factors have a very clear impact. I am intimately familiar with the pressure politicians face to achieve things and to provide a response to the needs and desires of their target constituents. In many cases, this causes politicians to consider only temporary achievements, and not the wider context or the greater good. But particularly in a state like ours, which has no constitution and no inviolable rules of the game, politicians have a special responsibility to defend the basic principles of Israeli democracy. That is precisely where we stand right now.

Al-Monitor: What would you say now to the prime minister and to your former colleagues in the Knesset?

Plesner: Before they even decide to bring the bill up for a vote in the Knesset, I would expect the country’s leadership and the prime minister in particular to rethink it. If, after doing so, they conclude that such a law is necessary, they should enact it only after they have reached a broad consensus within the coalition and the opposition alike, and present a law based on the principles of the Declaration of Independence.