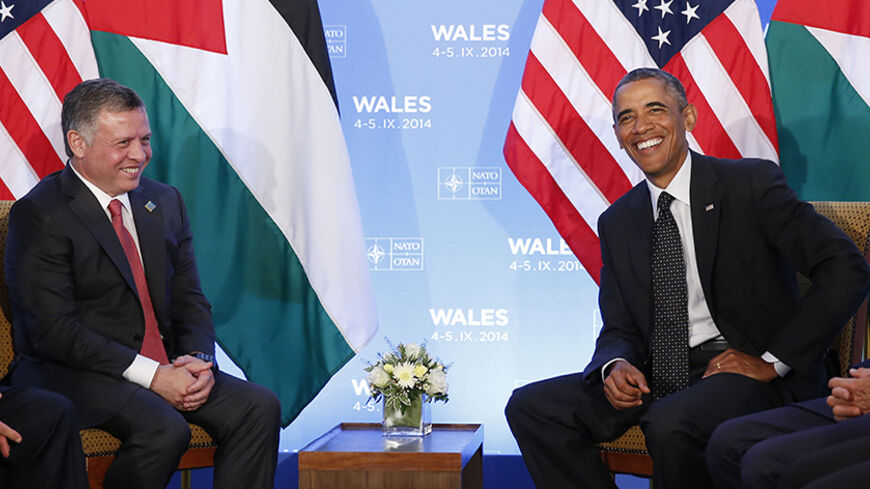 US President Barack Obama (R) and Jordan's King Abdullah smile during a meeting at the NATO Summit at the Celtic Manor Resort in Newport, Wales, Sept. 4, 2014. - REUTERS/Larry Downing

A House panel on Nov. 19 unanimously cleared legislation to boost military aid to Jordan in a symbolic show of support ahead of a planned visit by King Abdullah next month.

The legislation, which Al-Monitor first reported on in September, is spearheaded by panel chairwoman Ileana Ros-Lehtinen, R-Fla., who visited Jordan over the summer and pledged US support to help the Hashemite Kingdom deal with the fallout from the crises in Syria and Iraq. Jordan says it is hosting some 1.4 million Syrian refugees as a result of the three-year civil war.

A stable Jordan is an "essential piece of the US Middle East strategy," Ros-Lehtinen said, playing a "central role" in response to crises in Syria and Iraq as well as helping mediate between Israel and the Palestinians. The vote aims to deepen the strategic partnership with Jordan ahead of a royal visit that Al-Monitor has learned will take place during the first week of December.

The legislation does not yet have a Senate sponsor and is seen as unlikely to pass this year. There had been talk of trying to attach it to a must-pass Defense authorization bill, but the House and Senate Armed Services panels that have jurisdiction over that bill usually frown upon attaching other committees' priorities to their effort.

Still, the policy appears to have broad bipartisan backing in Congress and the support of the State Department, potentially paving the way for easy passage in the next Congress. Voting on the bill this week notably got one newly elected senator, Rep. Tom Cotton, R-Ark., on record in support of the measure.

The United States-Jordan Defense Cooperation Act authorizes the State Department to sign a five-year memorandum of understanding with Jordan from 2015 through 2019 to increase military cooperation, "including joint military exercises, personnel exchanges, support for international peacekeeping missions, and enhanced strategic dialogue." It calls for increasing US military aid to $1 billion a year — up from $300 million in President Barack Obama's fiscal year 2015 budget request — although the aid would have to be appropriated separately.

More immediately, the legislation would change US law by adding Jordan to a list of countries that get expedited congressional review under the Arms Export Control Act of 1976. Jordan would join NATO countries as well as Israel, Japan, South Korea, Australia and New Zealand in getting the favorable treatment.

Practically, the changes to section 36(b) of the law would mean that Congress would only need to be notified of proposed foreign arms sales to Jordan 15 days before the US government can take the final steps to conclude a government-to-government foreign military sale, according to an analysis of the current law by the Congressional Research Service. No deals were in the pipeline as of September.

More significantly, the special status also increases the threshold at which congressional notification is required at all.