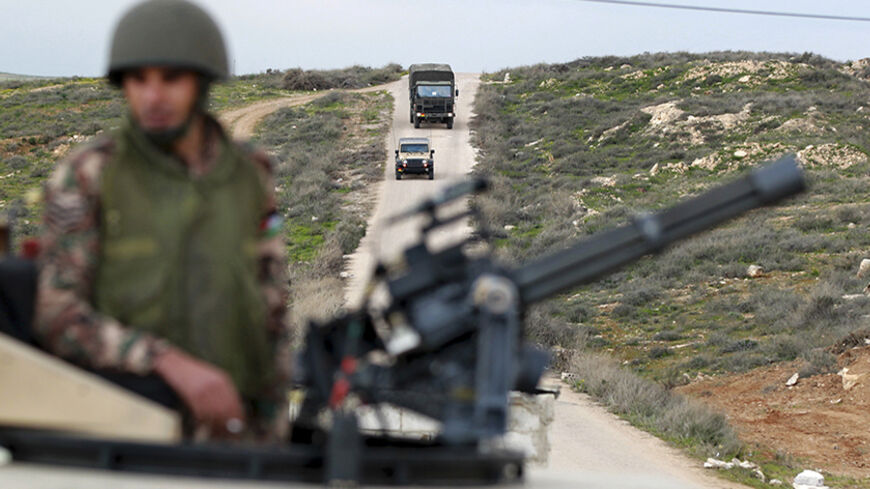 A Jordanian soldier stands guard in his tank as Jordanian army vehicles carrying Syrian refugees drive toward it at the Jordan-Syrian border near Mafraq, Feb. 18, 2013. - REUTERS/Muhammad Hamed

A key House member wants to make it easier to send weapons to US ally Jordan as part of the stepped-up effort to combat the Islamic State (IS).

The chairwoman of the Foreign Affairs panel on the Middle East will shortly be introducing legislation to increase military aid while easing roadblocks to arms sales to the Hashemite Kingdom, Al-Monitor has learned. Despite being introduced at the tail end of the legislative session, the bill from Rep. Ileana Ros-Lehtinen, R-Fla., is seen as having a real chance of passing in December as an amendment to the must-pass National Defense Authorization Act.

"It should be the policy of the United States to support the Hashemite Kingdom of Jordan in its response to the Syrian refugee crisis, provide necessary assistance to alleviate the domestic burden to provide basic needs for the assimilated Syrian refugees, cooperate with Jordan to combat the terrorist threat from the Islamic State of Iraq and the Levant (ISIL) or other terrorist organizations, and help secure the border between Jordan and its neighbors Syria and Iraq," the bill states.

The United States-Jordan Defense Cooperation Act authorizes the State Department to sign a five-year memorandum of understanding with Jordan from 2015 through 2019 to increase military cooperation, "including joint military exercises, personnel exchanges, support for international peacekeeping missions, and enhanced strategic dialogue." It calls for increasing US military aid to $1 billion a year — up from $300 million in President Barack Obama's fiscal year 2015 budget request — although the aid would have to be appropriated separately.

More immediately, the legislation would change US law by adding Jordan to a list of countries that get expedited congressional review under the Arms Export Control Act of 1976. Jordan would join NATO countries as well as Israel, Japan, South Korea, Australia and New Zealand in getting the favorable treatment.

The legislation would represent a symbolic boost for Jordan, which has struggled to take in more than 600,000 refugees from the three-year-old civil war in neighboring Syria. It also has the potential to boost the country's security, even though no major arms deals are currently in the pipeline.

Practically, the changes to section 36(b) of the law would mean that Congress would only need to be notified of proposed foreign arms sales to Jordan 15 days before the US government can take the final steps to conclude a government-to-government foreign military sale, according to an analysis of the law by the Congressional Research Service.

More significantly, the special status also increases the threshold at which congressional notification is required at all.