A key House panel voted this week to establish an enterprise fund that Amman had previously resisted. 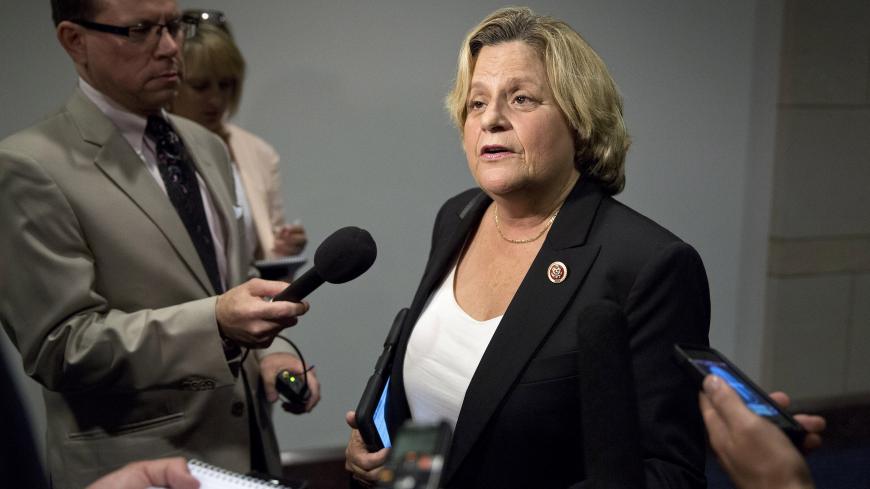 US Rep. Ileana Ros-Lehtinen, R-Fla., speaks to the media before attending a closed meeting for members of Congress on the situation in Syria at the US Capitol, Sept. 1, 2013. - REUTERS/Joshua Roberts

Congress is using a defense cooperation bill with Jordan to encourage investment in the country's private sector.

The House Foreign Affairs panel on Thursday advanced legislation encouraging the Donald Trump administration to establish an enterprise fund for small- and medium-sized Jordanian businesses. The goal of the United States-Jordan Defense Cooperation Extension Act is “to jump-start the kingdom’s private sector as well as help our economy,” Rep. Ileana Ros-Lehtinen, R-Fla., the bill’s sponsor, said ahead of the markup.

Multiple USAID officials told Al-Monitor that Jordanian officials did not want an enterprise fund in 2012 because they feared it would divert US foreign assistance funding from other economic development programs. Enterprise funds typically require initial US investment from economic support accounts over several years, but proponents of the effort argue that Congress can always appropriate additional economic support to offset any potential loses.

“This resolution reaffirms the importance of authorizing a new and expanded assistance package that would efficiently address Jordan’s economic needs, including job creation and supporting entrepreneurship and small businesses to achieve sustainable growth and development,” Kawar told Al-Monitor.

The United States began establishing enterprise funds in the early 1990s to help former communist countries in Eastern Europe bolster their private sectors as they sought to transition to a market economy. In the aftermath of the Arab Spring, Congress sought to apply the same solution to Arab countries whose economies are often dominated by the public sector. After initial US government investment, enterprise funds are expected to sustain themselves and generate returns on investment by attracting private investors.

“While enterprise funds should not be looked upon as a panacea, it is clear that they can be powerful drivers of economic growth and spur the necessary development of sustainable private sectors and turn a profit at the same time,” Ros-Lehtinen said at a June hearing on the topic.

While the leaders of those two enterprise funds hailed the model as a means of job creation, they both stressed the need for more local buy-in on the funds’ boards of directors to attract more investment.

In addition to creating the enterprise fund, the bill would ensure that current US and Jordanian defense arrangements, set to expire next year, extend through 2022.

Typically, the administration must notify Congress of any foreign military sales worth more than $14 million. However, 2015 legislation from Ros-Lehtinen raised that threshold to $25 million for Jordan. That bill, which expires next year, also paved the way for a faster congressional review process for sales above $25 million.

The new bill also encourages the Trump administration to negotiate a new memorandum of understanding with Jordan running through 2022. The current memorandum resulted in at least $1 billion per year in US assistance to Jordan from 2016 through 2018. It is also set to expire next year.

“The United States is in ongoing discussions with Jordanian officials regarding Jordan’s request for a new memorandum of understanding, and we look forward to continuing our extraordinary partnership with Jordan,” a State Department spokesman told Al-Monitor in October.

Kawar praised both the arms sale extension and the call for a new, five-year memorandum of understanding between the two countries.

“The United States-Jordan Defense Cooperation Extension Act is a testament to the strong strategic partnership between our two countries,” Kawar told Al-Monitor. “[Thursday’s] markup builds on this robust relationship and allows us to pursue our common vision for peace and stability in the region.”