The security restrictions imposed by the authorities in Egypt on its youth are pushing many to believe in the ideology of the Islamic State (IS) and become actively involved in IS cells in Egyptian society. 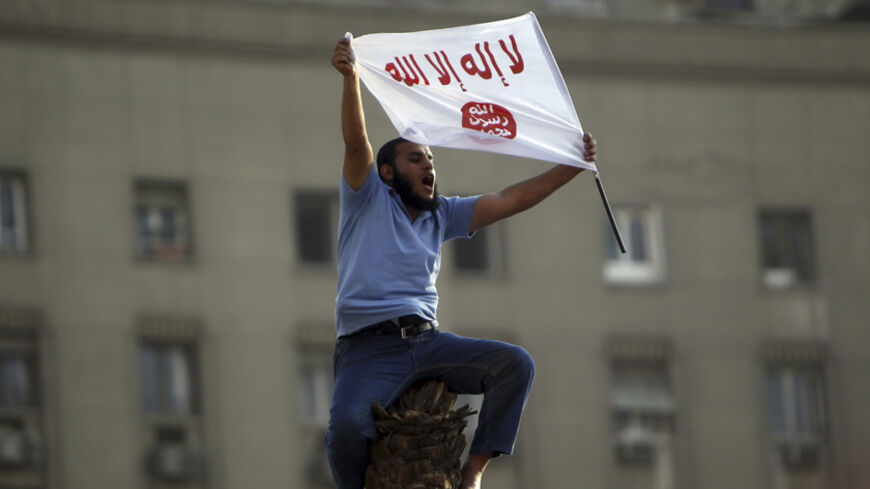 A supporter of Muslim Brotherhood presidential candidate Mohammed Morsi celebrates his victory in the election with a Salafist flag at Tahrir Square in Cairo, June 24, 2012. - REUTERS/Amr Abdallah Dalsh

“I used to believe in the motto, ‘Our peacefulness is more powerful than bullets.’ But when bullets started being directed at us and we were accused of being terrorists, I started to believe only in force to preserve my beliefs and establish the Islamic State in Egypt.”

This is what a former Muslim Brotherhood youth told Al-Monitor when asked about the reason why he believes and supports the Islamic State (IS).

Al-Monitor met this young man, who refused to be named for fear of harassment by the security services, at an Egyptian prison 1½ years after he was arrested during the pro-Morsi sit-in on Aug. 14, 2013. He still hasn’t been tried. He explained why he believes in IS' ideology, and that he sees the approach of IS as a way for large religious currents to recover some of their rights. Egyptian youth like him have been hounded by the Egyptian security services since July 3, 2013, when President Mohammed Morsi was ousted.

The young man said, “Injustice and locking me up here on the pretext that I’m a terrorist without having done anything are stronger reasons for my despair than the belief in peacefulness, as some keep repeating. … Whether or not we take up arms, in the eyes of the state and Egyptians, we are terrorists, [and they believe] they have the right to lock us up, kill us, rape our daughters and sisters, while we sit idly by in prison.”

He described the drive of many of his friends and acquaintances in prison and in Egyptian society to support IS' ideology as "the IS fever." It is a way to deal with the political developments in Egypt and to escape from the security grip and harassment.

“We follow the news of IS’ powerful blows, advances and control in the battles in Iraq. [IS] has sophisticated weapons, according to what we hear from friends who visit us [in prison] or via cell phones that have been smuggled inside the prison,” he added.

Political analysts tend to categorize most Islamist youth — especially those detained — who support and are impressed by the IS model as “IS ultras,” i.e., they only support IS principles and do not intend to act on them in Egypt. But Al-Monitor's interviewee, on the other hand, referred to groups that have already started forming inside their prison cells and are making contacts outside prison. He said, “We will grab any opportunity to implement what we believe in.”

Al-Monitor spoke to a Salafist in al-Sharqiya governorate who said he will soon travel to Syria now that his transit visa via Turkey, after six months of trying, has been approved. He said that after he joins IS, through Salafist intermediaries in Egypt, he will try to spread IS’ ideology in Egypt.

He said, via Facebook, that he has faith in IS because it is strong. “The Islamic nation [of Egypt] is now broken, and [IS] is raising the nation's head, it is acting in God’s will and is terrorizing the enemy of God.”

He said, “Traveling to Syria now is difficult but not impossible. If we cannot go to our brothers in Syria or Iraq, we will form an IS cell in Egypt.”

Although there are many signs of IS support by many Islamist youth, especially Salafist jihadist groups that have opposed the government since Morsi’s isolation, Egyptian Interior Minister Maj. Gen. Mohamed Ibrahim has repeatedly emphasized that there are no IS elements in Egypt.

So far, no group has declared its direct relationship with IS. But IS’ ideas of violence, taking up arms and beheadings as a way to return to an Islamic state have started to resonate with small groups — such as Kataeb Helwan, whose slogan is, “We are fed up with the Muslim Brotherhood’s peacefulness" — that are trying to make their presence felt.

In an interview with Al-Monitor, Kamal Habib, an expert in jihadist movements, said, “It is not certain that the Brotherhood is now in favor of its youth joining IS. But most of the recruits are young people who used to sympathize [with the Brotherhood] but had not [sworn allegiance to it]. They started supporting IS because they think that now is not the time for peace.”

Habib said that many reasons are driving these groups of young people to IS. “Marginalization, poverty, the failed experience of the Muslim Brotherhood in governance and the blows by the security services have become sufficient justifications for violence.”

Although the security services in Egypt are trying to impose restrictions on travel to Syria, Habib said, “If these young people fail to travel to Syria, that will not dissuade them from the idea. They will turn into new and different jihadist groups in Egypt. Egyptian prisons are now an open field for extremism, takfir, supporting violence and even beheadings.”

Since the January 25 Revolution, signs have emerged indicating the spread of ideas that violence can be a means for change. Meanwhile, the Egyptian state is losing all its security tools to confront and combat terrorism. The Egyptian government does not believe in reconciliation with the youth currents that are rebelling against the state. The political situation is still threatened by more tension, which may develop into further violence despite the constant reassurances of Egyptian officials that Egypt is not Syria or Iraq.