Egypt’s Islamists try to distance themselves from IS

As Egypt’s Islamist groups fail to take a common stance on domestic politics, they agree at least that the Islamic State is giving political Islam, as a movement, a bad reputation. 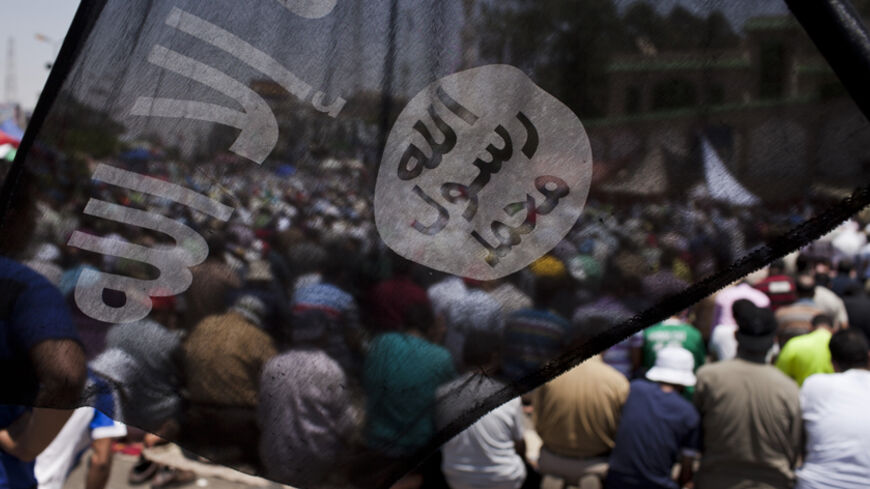 A black flag associated with the Salafist Islamist movement flies behind supporters of former Egyptian President Mohammed Morsi, who perform midday prayers, the day after Morsi was ousted from power on July 4, 2013, in Cairo. - Ed Giles/Getty Images

For the first time since the July 30 Revolution, Egyptian Islamists agree on refusing to call the Islamic State (IS) a terrorist group. They reject the international coalition to fight IS and see it as an attempt to create division in the region and to target political Islam in general.

This agreement, however, reflects the Islamists’ state of confusion in Egypt after their image lost ground, due to IS’ violent acts and that the group was put into the same basket as the Islamists.

In an interview with Al-Monitor, Yusri Hamad, the vice president of the Salafist National Party, expressed his refusal to describe IS as an extremist or terrorist group, since he does not know its ideology and has not read much about it. “Perhaps some Iraqis, from within IS components, were tortured, which means IS does not represent jihadist groups. Many IS members joined the group as a reaction to the torture they endured under [Nouri] al-Maliki’s government or the US occupation,” he said.

Islamists, in Egypt as well as in other countries, seem to be unable to forget the US actions against the Islamists, after the 9/11 attack by al-Qaeda. Although the United States began campaigns against terrorism after the Sept. 11 attacks, and although it focused on extremist groups in many regions, such as Afghanistan, Iraq and others, most Islamists believed that the United States was fighting Islam in general and not just terrorist groups, Hamad said.

In this context, Hamad condemned US interference in the region and considered it to be an attempt to create a new reality and overlook the massacres it is committing. “Why are they fighting IS but not [President Abdel Fattah al-] Sisi? Why are they fighting IS but not the Houthis?” he asked angrily. Hamad believes that the international coalition was not created to fight IS, but for specific interests. He severely criticized Egypt for joining the coalition, saying that it was trying its best to become part of the international system and overlook its suppressing policies.

Hamad was surprised by the media wave against IS, since it did not mention the massacres committed by the US invasion against Iraq and the massacres against Muslims in several areas, like Burma and Central Africa. “The Islamic movement and the Islamic Awakenings have been attacked for 60 years. This is an episode of the series of attacks against Islamists,” he said.

Vice president of the Arab relations committee at the Salafist National Party, Yahi al-Safi Saadallah, agreed with Hamad that IS was a mutual US-Iranian-Syrian creation. He linked the coalition’s inability to eliminate IS, despite the group’s primitive weapons, as an attempt to create division in the region.

Saadallah described IS as a group of extremists, and as an expansion of the Kharijite ideology, which accuses Muslims of disobedience and considers their killing as “halal,” or permitted in Islamic law. However, he refused to call them terrorists and jihadists, since these are terms promoted by the United States. He accused the Turkish and Qatari media of feeding the feeling of injustice toward the Islamic movement (IS). He also believes that there is a war against Islam in Egypt, which he thinks is wrong. Hamad regretted that this image has made the youth feel somewhat oppressed and humiliated, to a point that they found what they were looking for in IS.

It seems that IS’ accomplishments in controlling territory and expanding in both Iraq and Syria, by taking advantage of the chaos and the marginalization of the Sunnis, have pushed the Islamic movements to mobilize in Egypt. These movements are most probably taking advantage of the country’s political and security instability as well as the deterioration of the economic situation, to tighten the noose on the opposition and raise the banner of Islam as IS did.

Therefore, it was not surprising that the chief coordinator of the Salafist Front in Egypt, Khaled Saeed, called for the organization of an Islamist revolution and holding protests against the regime on Nov. 28, while many reports said the organization sought armed actions.

In an interview with Al-Monitor, Saeed denied that the movement was armed, unlike what has been circulated in the media. However, he said that the movement adopts ways that are different from the Muslim Brotherhood's, without giving more details to this effect.

He criticized the Muslim Brotherhood as it is the largest Islamist group with potential to make a change, and yet it remains peaceful despite all the injustices they are being subjected to. "The terrorist regime portrays us as killers. But the regime itself is IS. It is killing us, torturing us and shedding our blood," he said.

Saeed described IS as “an Islamist organization waging a battle of national liberation, based on a certain doctrine, against the American, crusade, Zionist, Jewish and Shiite hegemony, which has led to the killing of Sunni Muslims."

Mamdouh al-Sheikh, a researcher in Islamic movements, said that IS has deleted the idea of peaceful demonstration among some Muslims, given the success it has achieved with violence. Some journalists condemned the idea of an Islamic caliphate due to IS behavior, considering that the Islamic movement became a threat to the national and democratic state

As for IS' impact on Egypt, Sheikh said that the group could appeal to some Islamists who would pledge allegiance to it, but it would not be at the core of the overall (Islamist) movement.

For his part, Saadallah put forth three possible scenarios regarding IS' impact on Islamists in Egypt. First, people might sympathize with the group due to the "unwise" security measures of the regime toward Islamists and the delayed reconciliation.

Second, some might ideologically sympathize with IS, which would be reflected at a third stage, in movements on the ground, and therefore countless IS sympathizers would emerge.

One could clearly state that IS has caused confusion among Islamist groups in Egypt, in light of its declining popularity in general, following the June 30 Revolution, which will continue to decline given IS' actions in Syria and Iraq. IS and Islamists in Egypt were viewed with the same lens, especially since some Islamist groups were not decisive enough in condemning IS’ actions, which raised questions about possible relations between these groups and IS.