A report from a field hospital in Cairo where nurses and witnesses recall the attack that killed 51 people and injured more than 300 moments after it happened. 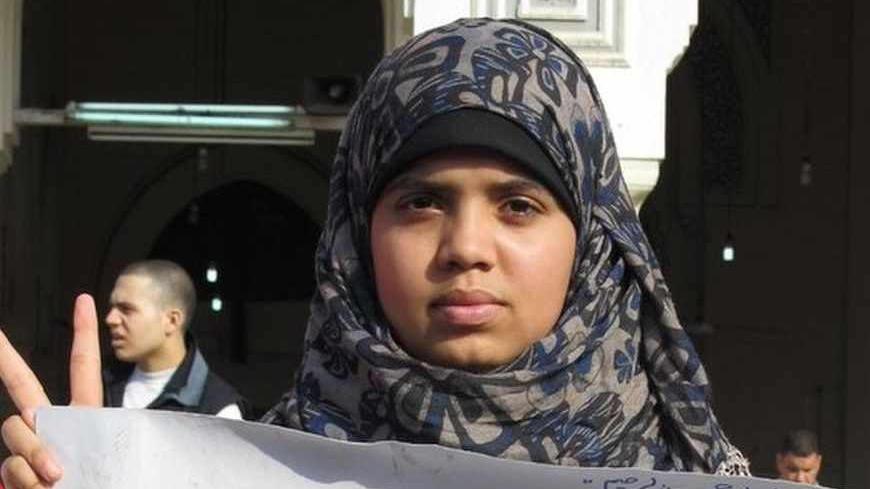 A girl flashes a peace sign during protests in Cairo, on July 8, against Egyptian President Mohammed Morsi being removed from power. - Brenda Stoter/Al-Monitor

CAIRO — In the makeshift field hospital in the al-Raba'a Adawiya Mosque, people are running, crying and comforting each other. Men walk around wearing bloodied clothing, and women wipe brown spots off the floor. Dirty bandages, empty IV bags and other first aid items are scattered around the place.

"It looks like a massacre happened, doesn’t it?,’’ a young nurse asks Al-Monitor. "We still can’t believe that so many Egyptians lost their lives. It’s horrible.’’

At 4:00 AM on July 8, at least 51 people were killed and 435 injured in clashes between supporters of toppled Egyptian president Mohammed Morsi and army forces. The Muslim Brotherhood accuses the military of attacking a peaceful pro-Morsi sit-in during dawn prayers, while the military contends that an "armed terrorist group" had attacked the Republican Guard headquarters, where the protest was being held.

Nurses cared for the wounded Muslim Brotherhood supporters at the back of the mosque. The people there were calling the shooting a massacre, including Nevine Helaly, a doctor at the scene when they brought in wounded and dead protesters.

"Hundreds of people were praying in Cairo near the headquarters of the Republican Guard. During their last lap, the Morsi supporters were attacked by the army. Men, women and children ran for their lives. It was complete chaos," Helaly told Al-Monitor.

A wounded man in a wheelchair sat next to her. He had been shot in the back, and while not paralyzed, was temporarily unable to walk. Hundreds of people, some dead, others alive, were being brought into the mosque. Most of the victims would then be transferred to an established hospital in the area.

"I saw an eight-month-old baby who died during the attack. How could the army do this?'' Helaly asked, crying and picking up a bloodied bandage. One of her colleagues tried to comfort her, giving her a hug. The female nurses and doctors are not the only ones weeping. Young male doctors also wipe their eyes when people talk of what happened earlier that day.

Although witnesses tell a different story, a military spokesman asserted that there were no children among the victims, because, he claimed, children were not on the streets at the hour of the shootings. Helaly was, however, certain of one thing: The Morsi supporters had no guns, no sticks and no intention of shooting at soldiers. The attack was a complete surprise, according to her.

Helaly declared, "I think they wanted to scare us because, according to the army, we are pariahs. I’m so afraid of what’s going to happen in the future. Will the army shoot more Muslim Brotherhood people? How can I ever raise my children in a society like this?'' Anti-Morsi protesters accused the pro-Morsi demonstrators of presenting images of Syrian children but falsely claiming that they are Egyptian.

Next to the mosque, a large protest by Muslim Brotherhood supporters continued. In front of a stage set up by the Brotherhood, female protesters stood at the left, separate from the men, who stood to the right. The thousands of women, men and children held banners with messages in support for Morsi and shouted such slogans as "We will not be silent" and "Morsi is still our president." At the stairs of the mosque, more veiled women held up signs and images of Morsi. Lots of protesters felt that the army had something against them, especially after the shootings.

A few hours before the shooting, relations between the protesters and soldiers had been good, according to Abu, a wounded young man with a bandage around his arm. "Soldiers gave us water, and we gave them some dates in exchange. Everything went fine, until they started shooting. When I felt the first bullet in my back, I held my hands up and yelled ‘peace,’ but the army kept on shooting."

Anti-Morsi supporters are afraid that the Muslim Brotherhood and its supporters will seek revenge, thus leading to more attacks in the future. Kafaa Hefny, a professor at Cairo University, cautioned, however, that while the Morsi supporters were angry, it did not mean that they will use violence to make a statement.

She told Al-Monitor, "Egypt will not have a civil war. The Muslim Brotherhood supporters are peaceful, and we stand up for all humans — Christians, liberals, revolutionaries, and Muslims. People think we’re terrorists, but we’re not. We’re normal people who want what they voted for: Morsi." She still supports the former president, who was removed by the Egyptian army on July 3 after millions of people took to the streets and demanded early presidential elections.

During the previous couple of months, Hefny, who wears a headscarf and a long coat, had advised the government on women’s rights. When asked why so many women in Egypt were being harassed or assaulted during the protests at Tahrir Square, she blamed a "lack of morals."

"Here you don’t see girls getting attacked by men because we will never tolerate that. Our faith keeps us from doing those crimes. The Muslim Brotherhood also tried to do a lot of things for women in general, like setting up programs to stimulate education. Unfortunately, a lot of those measures were still in progress. Morsi just didn’t have enough time to show people what he can do. That hurts, because now it looks like all our work is for nothing.’’

According to Hefny, a lot of lies have been spread about the Muslim Brotherhood. "They say that we support female circumcision, because it is ‘clean’ to get girls circumcised, and that we want to lower the marriage age. The Muslim Brotherhood is also being compared to the Salafists, which is an insult." The one criticism that Hefny does accept is that Morsi and his people did not have the required qualifications to make the right decisions.

Behind the Brotherhood stage next to the mosque, "Mother Saloua" is talking to a few Morsi supporters. The 64-year-old woman sees herself as a protector of the revolution. In January 2011, she was one of the first Egyptians to call for the revolution that eventually led to the resignation of President Hosni Mubarak. Now she feels it is her duty to stand up for Morsi because he was democratically elected.

"I’m a simple Muslim. I don’t wear a headscarf, and I do a lot of things other Muslim women don’t do," she explained. "Still, I support Morsi because that is the right thing to do. What the army did is nothing but a dirty coup. Whatever happens in the future, I stand behind the revolution, and Morsi is the result of that. Egypt elected him, so he has to stay.’’