Egypt’s President Abdel Fattah al-Sisi has issued another controversial law to repatriate non-Egyptians accused of committing crimes, drawing criticism that it might expand the president’s privileges over the judiciary power. 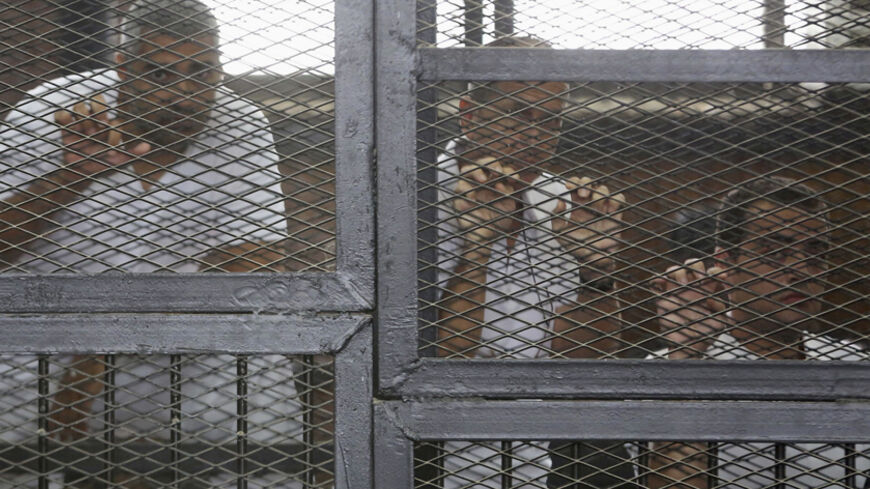 Egyptian President Abdel Fattah al-Sisi has issued a decree that allows him to repatriate foreigners accused or convicted of a crime, based on a memorandum from the public prosecutor and with the Cabinet’s approval. The power is to be used “whenever the higher interest of the state dictates it,” according to the text of the law.

Lawmakers disagreed over the law's constitutionality. Legal expert Mohammad Nour Farhat wrote: “The penal code is territorial and applied to all acts occurring on the state’s territories, including crimes, regardless of their committers [be they Egyptians or foreigners]. This matter is related to the state’s sovereignty."

“The president’s authority over criminals does not constitutionally start until the issuance of the final judgment and is represented by the right of pardon. Before that, interference in judicial affairs or in proceedings is a crime to which no statute of limitations may be applied,” he added, referring to Article 184 of the 2014 constitution.

He described the law as a natural mechanism to implement extradition treaties.

Farhat said that the new law reflects the president’s interference in judicial affairs. Political analyst Refaat al-Sayed Ahmad, who agrees with Farhat, told Al-Monitor, “The law undermines the judiciary’s powers because releasing an accused person or convict should be a judicial affair. Such laws that expand the president’s privileges are not welcome. Although I do not favor this law, I understand the president’s reasons. Egypt witnessed several crises after June 30 [2013] with the trial of some foreigners such as the Al Jazeera journalists. This issue put the Egyptian authorities in an awkward position with several states.”

Security expert Maj. Gen. Khaled Akasha told Al-Monitor, “The law does not negatively affect national security, and it won’t allow any foreigner to commit a crime on Egyptian territories and escape punishment. It allows the president to deport foreign culprits, but does not force him to do so. This is to say that the decision is left to his own discretion, depending on the country’s higher interest,” he said.

Ahmad and Akasha said that the main beneficiaries of the new law are the correspondents of Al Jazeera English, Peter Greste (Canadian) and Mohamed Fahmy (Egyptian-Canadian), who are serving time for the case known across the media as the “Marriott Cell” affair, and Mohamed Soltan (Egyptian-American), son of Muslim Brotherhood leader Salah Soltan, who was jailed on the grounds of the “Rabia Operations’ Room” affair. However, the law applies to Fahmy and Soltan only if they give up the Egyptian nationality.

Research showed that there are other debatable cases, and the accused or indicted parties might benefit from the new law, like the American Robert Frederick and the German Christine Margaret who are serving time for receiving illegal foreign funds in the 2012 case known as “Foreign Funding of Civil Organizations.”

The law might also be applied to the Jordanian telecommunications engineer Bashar Abou Zeid, who is accused of spying, and the Brazilian Alson Ricardo and the Italian Sandro Di Silva who were accused of having homosexual relations at a hotel in the Dokki district.

Ahmad said that the law might be a precautionary step paving the way for possible legal measures against foreigners heading foreign civil associations that have not settled their situation according to the Law 84 of 2002, during the period set by the Egyptian authorities and ending on Nov. 11, 2014.

“Arresting these people and accusing them might lead to a diplomatic crisis between Egypt and some countries and might result in deporting the foreign nationals,” Ahmad said.

“The new law will provide legal cover for their deportation, especially since the crisis with the civil society organizations in 2012 [foreign funding of civil organizations] ended with facilitating the escape of many foreign culprits. This had sparked criticism against the military council, Kamal Ganzouri’s government at the time and the Egyptian judiciary as well,” he added.

Akasha said that the law might make way for deals to hand over some foreign citizens accused in Egyptian cases to their countries, in exchange for some accused Egyptian figures from Mohammed Morsi's and Hosni Mubarak’s regimes or some of those who committed crimes that harmed Egyptian national security and fled to other countries.

It is noteworthy that most figures of Morsi's and Mubarak’s regimes wanted by the judiciary fled to Britain, Qatar, Turkey, the United States and Sudan. There are no statistics on the number of citizens of these states who were arrested in Egypt on the grounds of accusations, investigations or issued judicial sentences.