Lawmakers are debating whether to give the Obama administration the power to sidestep legal obstacles to the $1.3 billion annual aid package 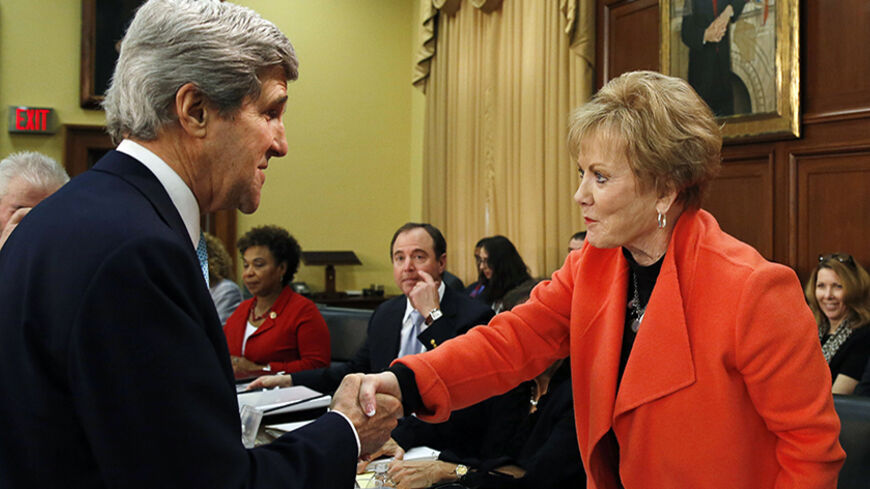 WASHINGTON — Key lawmakers are debating whether to ease the tough restrictions on military aid to Egypt that they put in place after the military ousted democratically elected President Mohammed Morsi, Al-Monitor has learned.

The potential changes are part of continuing talks surrounding a 10-month "omnibus" spending bill that House and Senate leaders hope to pass by Dec. 11, when the current stopgap measure expires. President Abdel Fattah al-Sisi's muscular crackdown on Islamists — including campaigns in the Sinai Peninsula and against smuggling tunnels to Gaza — is prompting some lawmakers to consider giving the Obama administration more flexibility to keep the $1.3 billion a year military aid spigot open despite human rights concerns.

"Egypt is one of the most problematic [aid relationships], because things have changed so much, so many times, in such a short period of time, and so we always have to work with where Egypt is right now," State and Foreign Operations panel Chairwoman Kay Granger, R-Texas, told Al-Monitor. "I've always said we need to decide on funding given what they're doing that helps our national security. And I think that [Sinai and tunnel operations] does. So I'm looking favorably toward Egypt."

Granger said her staff hasn't finished putting together its foreign aid proposal. She said "several things are still up in the air" but one option may be to give the State Department waiver authority that it currently lacks.

Such a move would receive a warm reception among some House members who are concerned about the on-again, off-again relationship between the United States and Egypt since the 2011 protests that led to Hosni Mubarak's ouster.

"I think we should look at ways to help that government succeed," said Rep. Mario Diaz-Balart, R-Fla., a member of Granger's foreign aid panel. "The concern is the lack of clarity from the administration. And anything that we can do to make sure that Egypt can count on a strengthening relationship with the US" he would support.

At issue is a January 2014 spending law that links disbursement of military aid to certifications by Secretary of State John Kerry that Egypt is "taking steps to support a democratic transition" and is "taking steps to govern democratically." The law has some carve-outs for counterterrorism and border security, sustainment of existing contracts and services and equipment that do not require delivery to Egypt; some $572 million has already been released by Congress, but the rest cannot go forward without the certifications.

Granger's subcommittee — and later the full Appropriations committee — voted in June to approve legislation that largely replicates the January bill. The Senate, however, has proven more critical of Egypt's human rights record under Sisi, setting up a showdown with the House as the two chambers try to merge their bills as part of the omnibus.

State and Foreign Operations panel Chairman Patrick Leahy, D-Vt., has been the main champion of legislation to restrict funding and is not seen as likely to change his stance. His committee passed legislation in June that would cut military aid by $300 million and impose tougher restrictions, including a requirement that Egypt release "all persons detained for exercising their rights to free expression, association, and peaceful assembly," according to a recent in-depth analysis of existing law by the Atlantic Council.

Some administration officials are believed to favor going forward with the certifications despite Egypt's continued repression of dissidents. Doing so, however, could cause a backlash on Capitol Hill, where lawmakers are already upset over the State Department's decision last year not to label Morsi's ouster as a coup.

Others in the administration are said to favor new legislation that would give them waiver authority to continue disbursing aid for national security reasons. Such waiver provisions are a mainstay of foreign aid bills but weren't included in the January 2014 law or the bills that cleared the House and Senate Appropriations panels in June.