The US State Department's TechWomen initiative is empowering women in the Middle East and syncing with the president's climate change efforts around the world. 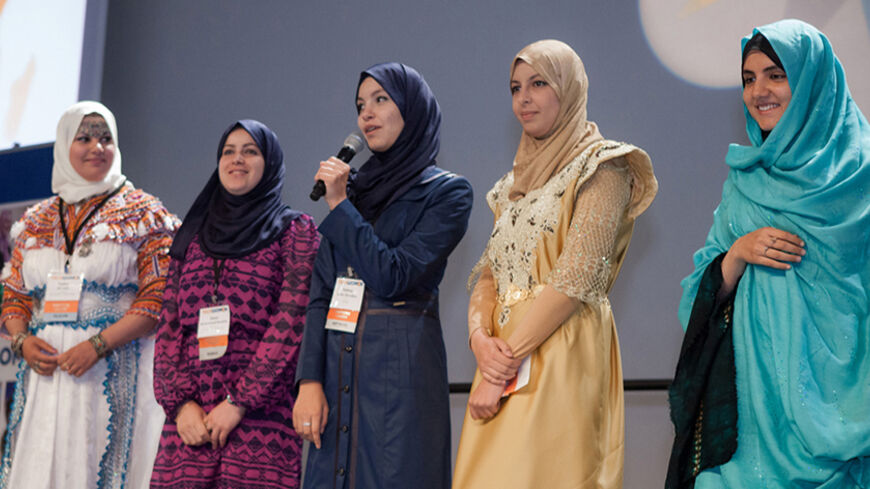 When Mona Karam landed in California, the young Egyptian civil engineer's professional goals added up to little more than a vague desire to get a master's degree in whatever the latest tech trend happens to be, she said.

Five weeks later, Karam is determined to help create an eco-friendly business culture on par with Silicon Valley's when she heads back home to Cairo. She calls her participation in the State Department's initiative for Middle Eastern and African women a "life-changing" experience that has given her the contacts and the inspiration to become a leader for change.

Karam's comments represent exactly the sort of youthful optimism then-Secretary of State Hillary Clinton hoped to inspire when she announced the TechWomen project as part of President Barack Obama's Presidential Summit on Entrepreneurship in 2010. The program, which helped empower 37 young female technology professionals from the Middle East when it started in 2011, grew to 78 participants this year, including several from sub-Saharan Africa, and a further expansion to Central Asia is planned for next year.

The program, run by the Institute for International Education's Center for Women's Leadership Initiatives in San Francisco, pairs each participant with two successful American women — a professional mentor and a cultural mentor — for five weeks of exchange and networking in the San Francisco Bay Area and Washington, DC. Those exchanges are a key component of a program that aims to empower young women in a region where they still face many obstacles.

"To find that there are a lot of women with amazing resumes and huge achievements [who] are leaders in their fields, this is very encouraging," Karam said. "We lack the role models.That's why [women] drop out of … [science, technology, engineering and mathematics] fields, because of the whole perception that it's a man-dominated field."

Their visit is followed by a weeklong follow-up trip in a Middle Eastern and a sub-Saharan African country by a US team of diplomats and mentors meeting with program alumnae.

TechWomen is "American diplomacy showing our best — our best values and entrepreneurship," said Mara Tekach, the State Department's deputy assistant secretary for professional and cultural exchanges. "It also goes back to why we do diplomacy for women overall, which is to enhance the quality of life around the world. It's fairly proven that as women's economic conditions improve, so do the economic conditions of everyone around them."

Tekach said that adding a "green" component to the program this year just made sense in that context. She said 24% of the participants were placed with green technology projects.

"Everything we're doing in technology is driven by what's happening in the real world, so as the green technology becomes more influential in economic trends and in our climate change policy, it was a natural one to start inserting into the program," she told Al-Monitor. "Of course, it does fit in with women's empowerment quite well."

Karam got to see firsthand the Bay Area's commitment to sustainable development when she was paired with Shawn Rosenmoss, a senior environmental specialist at the San Francisco Department of the Environment. She's now determined to bring the region's e-waste recycling and energy efficiency to her employer, Vodafone, as well as Cairo's Smart Village business park and beyond.

"Right now we have a huge energy crisis in Egypt. It has a lot of levels and lots of factors. And one of them is our wasteful practices," Karam said. "The level of awareness in Silicon Valley is pretty amazing. If I succeed [in sharing it] on an internal level I will take it to the next level, to the Smart Village. And the next level is the government level, the Department of the Environment in Egypt. So it could be mandatory; we may come up with codes or laws that obligate all the companies."

Fatma Zohra Djoudjou, a 25-year-old Algerian software developer, said her mentorship with Twitter impressed upon her the importance of communication and management skills beyond the technical. She said she was determined to become a "female role model in Algeria" armed with these new skills.

"We have a lack of females in computer science, management, leadership and so on," Djoudjou said. "When I get back home, I'm planning to work on my own capacity in order to empower the others."

"I have great ambitions to build a bridge between Silicon Valley and Algeria," she added.

Past alumnae have had similar ambitions, helping to launch a Maghreb Startup weekend in May in Algiers with participants from Algeria, Tunisia and Morocco.

Even more experienced professionals say they benefited greatly from the program.

Amel Ghouila, 32, a scientist working at the Institut Pasteur in Tunis, is part of a pan-African bioinformatics network called H3ABioNet. She said her mentorship with the senior eLearning instructional designer at Esurance, Linda Mahnken, gave her the tools to vastly expand the reach of the network of African research institutions and universities.

"Traveling between African countries is really hard and very expensive," Ghouila told Al-Monitor. "But with e-learning, we're developing a learning platform to allow a great number of students to attend these courses."

Another advantage: Female participants from conservative families — Ghouila mentioned Sudan, in particular — may not be allowed to travel and stay away from home for the five weeks or so a course can last.

"An e-learning platform will allow them to be trained without traveling," she said, "just staying at home using a mobile or a computer."

With the new contacts she's made at TechWomen, Ghouila said she's looking forward to collaborating with women across the Middle East and North Africa.

"Right now I'm working in an African network, but hopefully we'll have a kind of Arabic network between North African and Middle Eastern countries," she said. "This was one of the most exciting things for me, being connected with women from different countries."

The State Department is quick to point out that the United States also benefits from the initiative — both the host companies, but also the broader US tech culture, which has come under increasing criticism for its perceived sexism.

The participants "are coming in to work on an actual project that can include something like bringing skills that aren't naturally available in that company on the ground," said Tekach. "For example, someone who speaks Arabic can work on an Arabic-language app, or any other kind of app that needs a variation or development that is culturally connected to their origin country. Sometimes it's not just culture; it's just, you have a country or an area where certain technology is needed more, used more, and you bring that to the table."

Sheila Casey of the State Department's Office of Citizen Exchanges says the mentorship component of the program has inspired American women in tech to create a similar program domestically.

"The American women have told me that they want to start a TechWomen program for America," Casey said. "When all the women come here to Washington, DC ... a group of the American mentors have formed a committee, and they want to tell Mara and me all about this and their plans."