A group of 27 teenagers from across the region recently visited the United States with a vision for the future of green energy, robotics and music. 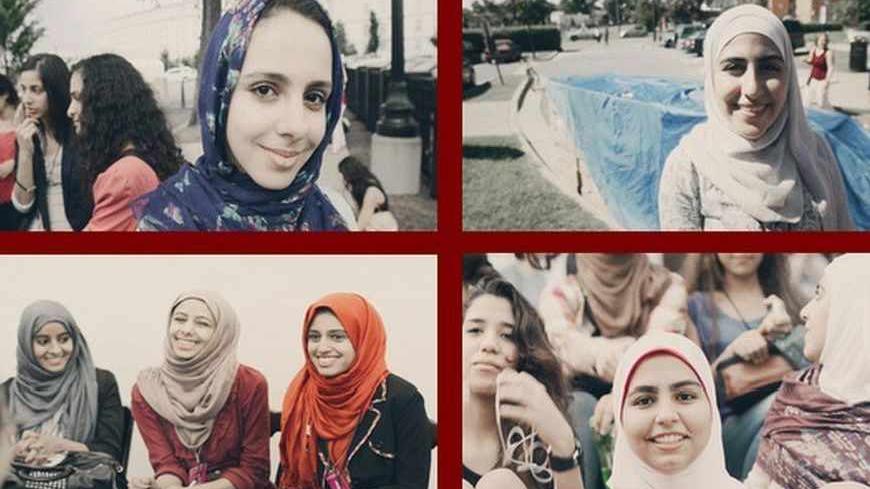 Some of the 27 girls from 9 countries in the Middle East are shown participating in Tech Girls 2013. - Diana Lupsic/Tech Girls Staff
Roja Heydarpour
@@rojarojaroja
July 10, 2013

A wide range of teenage girls from across the Middle East descended on Washington, DC, on June 25. Some dressed in long sleeves and double-layered hijabs and others in miniskirts with their hair flowing down their backs, they had all come for Tech Girls 2013, an international exchange program that provides girls with three weeks of intensive tech training, mentoring and cultural immersion.

This group of 27 was chosen out of 650 applicants for a State Department initiative implemented by Legacy International, a Virginia-based organization. It was easy to forget that the girls have yet to finish high school as they thoughtfully laid out their ideas. Determined, driven and aware of the global politics that inform their lives, all of them inherently understood the importance of tech literacy for whichever field they ultimately choose — whether that would be the future of green energy, search-engine software or music.

“I’m addicted to green energy,” said Mai Mohammed Foad Hal. “They call me Miss Electricity.” Hal, 16, lives in Port Said, Egypt and her current pet project concerns water. She wants to develop a mechanism that can extract moisture from the air and convert it to liquid than can be used on a large scale. And as Egypt, which historically depends on water rights to the Nile, increasingly battles Ethiopia and other upstream countries, water will certainly be an issue to reckon with. But Hal’s drive is not born of a purely patriotic purpose.

“We should think about other countries," she said. "We are on one continent. We are all Africans.”

This idealism was a common thread among the girls, who came from Algeria, Egypt, Jordan, Lebanon, Libya, Morocco, Tunisia, Palestine and Yemen. Their hope for the future appeared to be more than just a side effect of youth, because many of them knew how to reach their goals.

“I decided to learn on my own,” said 16-year-old Olfa Hammami from Medjez el-Bed, Tunisia. “What we learn in school is not interesting at all.” She took up chess, astronomy, astrophysics and energy science outside of her regular curriculum. She has also trained in robotics, a technology she would like to advance to give life to artificial limbs.

The girls spent one week at a technology camp at Towson University in Maryland, where they either built a web site or a 3-D game, had a power lunch at Bank of America in New York City and visited the Google offices before spending time with host families.

Sixteen-year-old Sondos al-Najjar from Zarqa, Jordan, used the tech camp to build a health site. She says she plans to use technology to advance medicine.

Nada Fawzi, 16, also from Egypt, wants to be an Internet mogul. “I want to work at Google,” she said. “It will help me to start my own company like Google and Microsoft.” She said she would like to start with gaming and eventually develop new search engines.

Like many of the girls, this trip was Fawzi’s first to the United States. She was surprised to learn that women there often get paid lower wages than men, and a labor strike outside of the Plaza Hotel in New York taught her that workers here are not always satisfied. These notions did not jade her, but worked to add to her worldview.

While most of the girls are science-oriented, some are on the fence. “Tech is for everything,” said 15-year-old Amina Chida from Kef, Tunisia. “We can use it for the arts — for music, like DJs.” Chida has studied the sciences but is also a musician who plays the piano and sings. Her artistic bent shined through in her open-minded approach to the world.

“Even simple things will have an impact on my country," she said. "Some people don’t know how to use the computer at all. I want to teach teenagers to use computers for things other than Facebook and games.”

The group was remarkably tame, considering the grouping of nearly 30 teenage personalities. There were tears, heat stroke and a little competition along the way, but they seemed to recover from their personal ebbs and flows to focus on the task at hand.

“I don’t want to just die,” said Hammami during dinner at the Hard Rock Cafe in Times Square, where the star power of celebrity memorabilia inspired little adolescent hysteria in this group. “I don’t want to have a simple life.”