Some of the Middle East's fastest growing companies visited the United States in search of advice and inspiration. 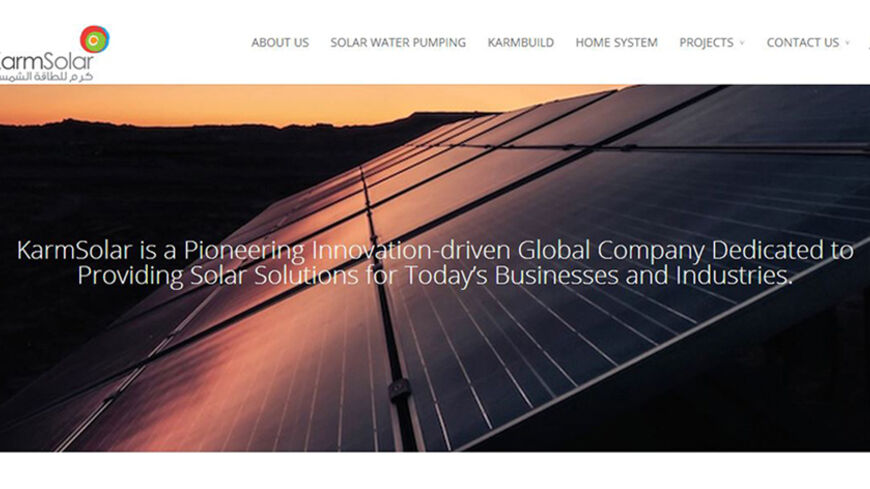 A screen capture from Karm Solar's website shows one of the company's solar panels. - karmsolar.com/

Some of the fastest growing companies from across the Middle East and North Africa are headed home with rekindled ambition and fattened address books after meeting some of the biggest names in US tech.

Nineteen companies participated last week in what is being described as the first-ever immersion program designed to bridge the Arab World and Silicon Valley. Entrepreneurs got to visit some of the world's top tech firms, including Google, Facebook and Twitter, and were offered one-on-one opportunities to tap would-be mentors for advice and even seek out potential investors.

The weeklong program was organized by the MIT Enterprise Forum's Pan Arab chapter and sponsored by Saudi Arabia's Abdul Latif Jameel Community Initiatives. Building on the Arab startup competitions MITEF has been running across the Middle East for the past eight years, the program aims to give young entrepreneurs the boost they need to take their projects to the next level.

"For the very first time we felt like there are really true innovations that have global outreach, and it's time for them to get exposure," Pan Arab chapter Managing Director Joelle Yazbeck told Al-Monitor. "The purpose was to be an eye-opener to Silicon Valley resources and for them to learn how and what they should do to get their stuff go global."

Participants said they were delighted with the program.

"This week was really efficient in helping us get in touch with key people in Silicon Valley that we couldn't have been able to connect to on our own," Lamiaa Bounahmidi, founder and CEO of the Moroccan fair trade Couscous company Looly's, told Al-Monitor in an email before catching a flight home. "Many interesting and deep discussions lead to rethink for the better some aspects of our businesses. This week was also an opportunity to connect with fellow entrepreneurs from the Arab region and explore synergies and potential partnerships between us."

Participants ran the gamut, from Jordanian mobile gaming studio Tamatem to Egyptian solar power company Karm Solar. While some are eyeing the regional Middle East market, others have global competition in their DNA.

"Ever since we started the company, we never thought the market is Lebanon or even the Middle East," Layla El Zein, chief officer for Strategy and Operations at medical device company CardioDiagnostics, told Al-Monitor. "We always thought that we want to innovate for the world."

Whatever their differences, all the participants share a passion for entrepreneurship.

"There's a strong sense that technology is a huge tool that can be a key to solving a lot of these societal issues and challenges" in the Middle East, said Nafeesa Syeed, who spoke at the program with her co-author Rahilla Zafar about their recent book "Arab Women Rising," which profiles entrepreneurs.

And they share a keen understanding that they're role models for a struggling region.

"They know there's a huge responsibility on them and they're passionate about it," said Yazbeck. "It's all about entrepreneurship and innovation — and they know it's the only thing that will save the Middle East."

It's not just the contacts with successful Americans; meeting fellow Arab entrepreneurs was just as much part of the enlightening experience.

"After connecting with these people, they just refilled me with energy — just knowing that they are out there, trying as hard as I am," El Zein said. "And as skilled as they are, as fantastic as they are, I'm sure that our group will be able to grow and support the next generation and I'm sure that, whether it takes five years or 30 years — I don't care — I'm sure that we'll be able to achieve something big. So let's hope that the external factors support us in doing that."

But talent is hard to find as top students flee to safer shores, and some are already having to make painful choices. CardioDiagnostics launched its software operations in Lebanon, but for the company's foray into medical hardware, El Zein feels she has no choice but to run operations out of the United States.

"We are in the cardiac field, and it's a matter of life and death," she said. "There is a sad reality you have to accommodate, but at the same time I believe that by being successful and saying that you are a Lebanese company by origin and that you still have R&D offices back in Lebanon that are doing a lot of great work, that has a lot of impact. This is how we start breaking stereotypes and changing perspectives. And from the social point of view, this is how we give back to our community — this is how we give the next generation the opportunities that we didn't get."

Fill the room with young, bright entrepreneurs and eventually the conversation turns to politics. El Zein said she urged her fellow entrepreneurs to lobby for changes to the region's sclerotic education system and poor management.

"My personal opinion is that we can do more, because when you are a powerful coalition … you can always use this power to put pressure on your government," she said. "And I would like to see this happening sometime soon, because we need to … push better legislation and laws in our countries when it comes to education, and other economic issues."

She said the weeklong immersion has already enabled her to set up interviews with Apple's health division and Samsung ventures, as well as with a leading manufacturer of wearable devices that makes products such as Fitbit fitness trackers. And she's met great entrepreneurs she hopes can become long-term mentors for her fledgling company.

"This is just the beginning. The vision is to really have a bridge between the two regions, so anyone coming from the Middle East know they have a contact person they can talk to and ask questions to and rely on if they really need connections," said Yazbeck. "This is what we really want to achieve on for the long-term."

Yazbeck said the Pan Arab chapter is already preparing for its next summit, in January.

El Zein for one is keeping her fingers crossed the program will thrive. She said one of the American participants told the group to keep in mind that the United States needs young Arabs' energy and innovation just as much as they need Silicon Valley's connections and experience.

"I think the benefit is really mutual," El Zein said. "This program is done in the name of the Middle East, but I think it's important just for the world. Because there is a lot of potential and talent in the Middle East that is oppressed."