Frenemies: the insincere alliance between US, Turkey

While Ankara and Washington maintain there's “no discrepancy” between Turkey and the United States over fighting the Islamic State, it's quite clear there's a huge chasm between them. 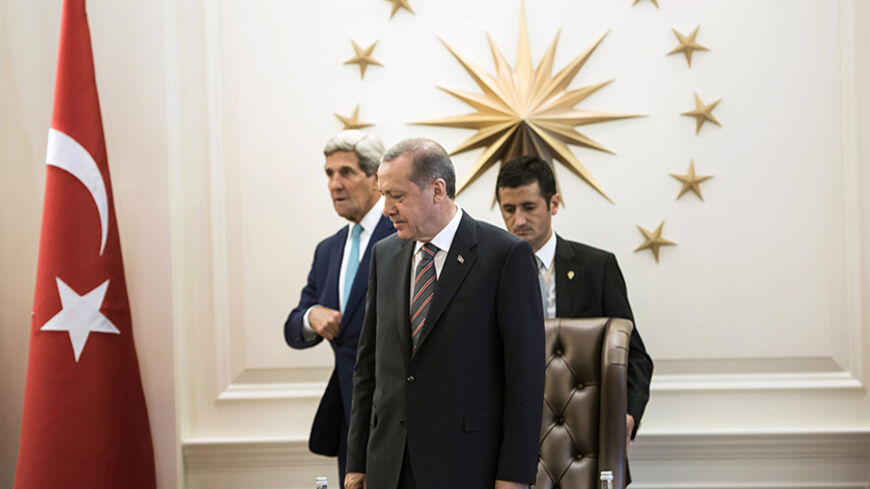 US Secretary of State John Kerry and Turkish President Recep Tayyip Erdogan take their seats in the president's office during a meeting in Ankara, Sept. 12, 2014. - REUTERS/Brendan Smialowski

On Oct. 14, US Secretary of State John Kerry said of Turkey: “Turkey, yeah. There’s — Turkey is a very valued member of the coalition and has joined the coalition, is doing things in the coalition, is committed to things in the coalition. And as far as I know, there is no discrepancy with respect to what is going on. Gen. [John] Allen was there, he had long meetings with them. The meetings, in his judgment, helped to move the ball forward. And so I really think that Turkey obviously has a very important role to play in this process going forward. … I mean, Turkey has agreed to host and train and equip people. It certainly has allowed the use of certain facilities, and we don’t need to get into specifics except to say that I don’t believe there is any discrepancy with respect to what they will or won’t do.”

What is particularly noticeable is Kerry’s insistence that “there is no discrepancy between Turkey and the United States.” Here the keyword is discrepancy.

Kerry’s remarks were in response to the following question:

“Mr. Secretary, the national security adviser on Sunday said that Turkey agreed to allow coalition use of its military bases, and yet Turkish officials have denied that such an agreement was reached. And also the Turkish military has begun striking PKK [Kurdistan Workers Party] targets, which one could argue weakens the joint fight against Daesh [Islamic State (IS)]. So can you clarify what understanding you have with the Turks with regard to their role in the fight against Daesh? And what is their policy on this?”

The “mission impossible” of clarifying the “no discrepancy” between Turkey and United States fell once more on Jen Psaki, the spokeswoman of the State Department. In her daily briefing on the same day, she was asked: “Secretary Kerry just addressed some of the questions, and he said that there is no difference between Turkey and US positions over what is agreed. … First of all, has Turkey given authority or agreed — to let the United States use US facilities and bases in Turkey against [IS]?”

And she responded: “There are already measures that Turkey has taken, including efforts to counter the flow of foreign fighters. They’ve also been hosting more than 170,000 refugees who’ve crossed into the border. … Turkey agreed to host a train-and-equip program and to allow for use of some of the facilities for the coalition. There are also, naturally, going to be discussions at the mil-to-mil level, which is only appropriate.”

For a professional journalist, it would be impossible not to see how garbled Psaki’s response was. So then, the natural question was inevitable: “So the national security adviser, Susan Rice, said that Turkey actually gave authority about the bases. It is not correct?”

She looked for an escape route, responding: “I don’t believe that’s what she said exactly in her quote. I know there were some background quotes from unnamed officials — so you always have to caution against some of those — that didn’t have information that was consistent with the agreement. But what I just outlined is what we have agreed to.”

The rest was an amusing Q&A exercise:

Q:  When you say “facilities,” do they include the use — assist to the use of air force?

A:  Well, which specific facilities and how they’ll be used is part of the discussion that we’re having with Turkey and we’ll have over the coming days.

Q:  So there’s no — still no confirmation of the kind of facilities you can use?

A:  Well, obviously, hosting a train-and-equip program will require certain facilities, but which and how and where is part of the discussion that’s ongoing at this point in time.

Q:  Yeah, but I mean outside of that, the equipping and training. I’m talking about the coalition effort and — against [IS].

A:  Well, that’s part of the coalition effort, in our view. Are you talking — I mean, the fact is there are a range of important functions that support our coalition operation that don’t involve airstrikes. I’m just not going to outline that much further than that.

Q:  So you’re not talking about the use of the Incirlik Air Base, for instance?

Rice said on NBC’s “Meet the Press” on Oct. 12: “They [Turkey] have said that their facilities inside of Turkey can be used by the coalition forces — American and otherwise — to engage in activities inside of Iraq and Syria.”

Rice did not specify what kind of military activities the United States would be allowed to conduct from bases in Turkey, but when it comes to “facilities inside of Turkey,” anybody familiar with such an issue knows and interprets that Incirlik is “the base” in Turkey. So, the media coverage in and out of Turkey was that Turkey finally bowed to US demands to allow Incirlik to be used for US air operations against IS in Syria.

Denial by Turkish officials was not late in coming. A day later, Turkish Foreign Minister Mevlut Cavusoglu said there was as of yet no decision on Incirlik, but that Turkey had reached consensus with the United States on issues such as a project to train and equip rebel Syrian fighters.

The consensus to train and equip Syrian rebels is not a novelty. It has been going on covertly for nearly two years. The important element in the Turkish-American discrepancy was about Incirlik.

The Financial Times reported on the Incirlik issue in very blunt terms: “Turkey has poured cold water on claims that the US-led anti-jihadi coalition has secured greater use of military bases in Turkish territory, highlighting continuing differences between Washington and Ankara.

“After US officials said that Ankara had agreed — at least in principle — to expanded use of the US air base in Incirlik, Turkey, Turkish officials said on Monday that no such agreement had yet been reached and that the government had not changed its position. But they added that talks were going on.”

The Washington Post was even more specific: “A statement issued by the office of Prime Minister Ahmet Davutoglu said talks are continuing between Ankara and Washington over whether to permit US forces to use Incirlik in the fight against the Islamic State, … however, ‘There is no new agreement on the Incirlik issue,’ the statement said.”

But it also added: “In a reflection of the sensitivity of the matter, US officials on Monday were reluctant to further address or clarify the issue for fear of irritating the Turks. “We are grateful for steps Turkey is taking to support the coalition, to include training and the use of some facilities,” said a US defense official who spoke on the condition of anonymity.”

Turkey’s denial on news that a deal was reached on Incirlik provided fuel to conservative critics of the Obama administration.

Charles Krauthammer told “Special Report” host Bret Baier on Fox News Channel that Rice’s comments on “Meet The Press,” coupled with the Turks’ denial, were a “huge embarrassment” and “unbelievable.” The conservative commentator also blamed Obama for this failure to reach an agreement, wondering why the Turks would join a war “where the leader of the coalition is not serious.”

The crucial point in facilitating Incirlik for the US or coalition airstrikes on IS in Syria is not solely a military issue. It, rather, is a political one. Opening up the base for the warplanes, without any doubt, would make it easier for the US Air Force. But, more than that it will signify Turkey’s willingness to fully engage and participate in the coalition led by Washington to fight IS over the Sunni lands of Syria and Iraq.

And here comes the discrepancy in Turkish and US positions: Turkey wants the United States to target the Assad regime to provide its ultimate downfall on behalf of Turkey. That is Turkish President Recep Tayyip Erdogan’s priority.

Despite the pains of US officials to convince people that there is no discrepancy between Ankara and Washington, indeed there is.