A court started to hear the first legal case of oil smuggling, revealing the dilemma between national security and the fight against radical Islamists. 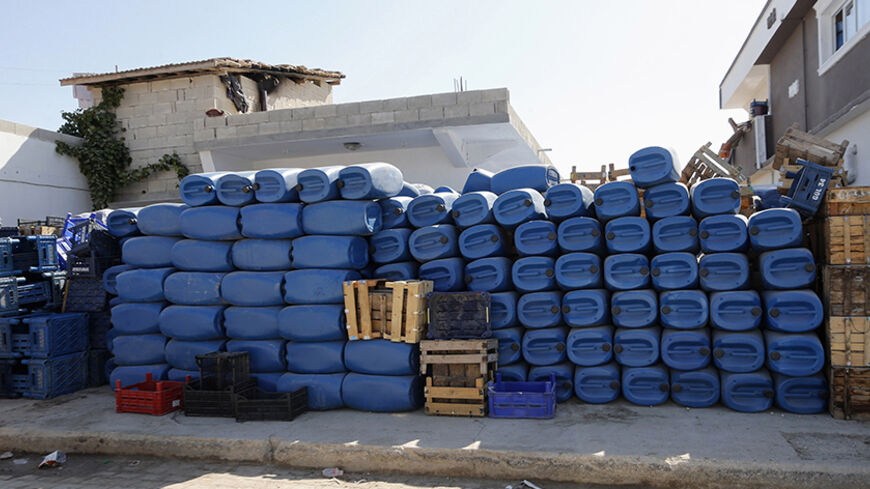 Blue jerrycans usually used by smugglers to ferry fuel smuggled into Turkey from Syria are stacked for sale in front of a shop in the Turkish border town Hacipasa, Hatay province, Sept. 8, 2013. - REUTERS/Umit Bektas

REYHANLI, Turkey — A court in the Turkish border town Reyhanli has begun hearing the first case of oil smuggling from Syria, which has brought Turkey under intense international pressure. Al-Monitor was provided full access to the indictment and the transcript of the first open public hearing, which took place Sept. 15. As the judge has not yet decided the case, Al-Monitor was strictly advised to only report on the generic themes of what the prosecutor detailed with extreme precision and unquestionable evidence.

The case lays out how a small village with fewer than 2,000 inhabitants on the border with Syria — called the Besaslan village attached to Reyhanli — transformed itself into a sort of cooperative where everyone mutually agreed to take part in illegal oil smuggling. The families who don’t want to actively participate are given hush money — 1,500 Turkish lira weekly ($663), which comes to a considerable amount in monthly terms (6,000 Turkish lira, or $2,650). It is a skillfully organized network where even family ties are overridden by the alleged chief of the network, referred to as A.B. The indictment also lays out how border patrols take part, exploiting their privileged status to benefit from the smuggling.

A military officer, for example, told the judge that the commander of the border post advised the village men “not to carry out the smuggling above ground, but underground.” The indictment reveals how the nature of smuggling changed from transporting the oil in plastic cans to laying pipes underground. A separate military officer also revealed that while the thermal cameras at the border leave no blind spot, the village men are advised to cross into Syria from an area where there are a lot of olive trees, and to turn their vehicles’ lights off. The village men learn about military movements in advance and use that critical information not to get caught. The Catch-22 is that the other side of the border is controlled by Jabhat al-Nusra militants, and the village smugglers share that critical information with the militants.

Those familiar with the case, who spoke to Al-Monitor on condition of anonymity because of the sensitivity of the matter, express concern over the serious clashes of interests between the two sides of the border. “These villagers made more than $800 million in 16 months that they probably could not have imagined in their lifetime," a source said. "While they only focus on making easy money, the militants on the other side of the border don’t even care about their lives and they learn about our military’s movements. This not only puts our security at risk here, but also threatens the entire security of the nation.”

The same sources in the case also said that the Syrians had stolen weapons from the border post and that the commander asked for help from the same village men. “Believe it or not, they went to the other side and brought back all those weapons. This is how the military is watching out for our security,” the source told Al-Monitor.

The transcript also reveals that military personnel sought help from these villagers — because of their close relations with the Jabhat al-Nusra militants — in getting back stolen Turkish vehicles that had been taken to the Syrian side.

The military personnel complain about their lack of orders for fighting against the smugglers, which appears to have resulted in lax enforcement all the way around. “We only have 50-60 patrols on the border, whereas there are more than 1,000 smugglers,” one military officer tells the judge. “We do all we can within our capabilities.”

The transcript also reveals that the defense lawyers weighed in on the political nature of the issue, accusing the government of creating an environment for the border to be open to exploitation because of the government's desire to topple the Syrian regime.

The judge asked for bail of 750,000 Turkish lira ($332,000) for the alleged leader of the network. “The judge was utterly shocked when the money was delivered in cash the next day. He thought this was an astronomical amount that would keep these people behind bars,” one source told Al-Monitor. The alleged leader of the network and 19 others are accused in the case, but none are now behind bars.

“The prosecutor might have surprised the government with his efficiency and professionalism, but he can’t bring justice to a gravely troubling, crumbling sense of justice and security here by himself,” one source seeking to remain anonymous told Al-Monitor. “This is clearly a set-up case to show to the Europeans that Turkey is doing it all by the book, but if you are really serious about understanding what is taking place on the ground, this should not fool you.”

The same source added, “If they are really serious about ending smuggling and therefore [ending] indirectly working with these extremists on the Syrian side, they can also shoot one or two smugglers just like they do now on the border with Kobani. Then we will understand they are serious about what they are talking about. Otherwise, this is only a theatrical show.”

The general sense among the locals is that even if the judge gives the accused jail time, it won’t be more than three or four years, and that it is all worth the money they made in less than two years. The wealth of the alleged leader of this network is now estimated to be around $2 million. “Even the women in the village cherished the smuggling business, as they saved the money to prepare a richer dowry for their girls. And let’s be frank. Although money is sweet, these extremists find comfort among the Sunni population here. So when people cooperate with smugglers, they don’t consider them to be a threat to their own security or to the nation.”