The transfer of Turkish weapons to the Free Syrian Army is documented in a court case in Hatay. 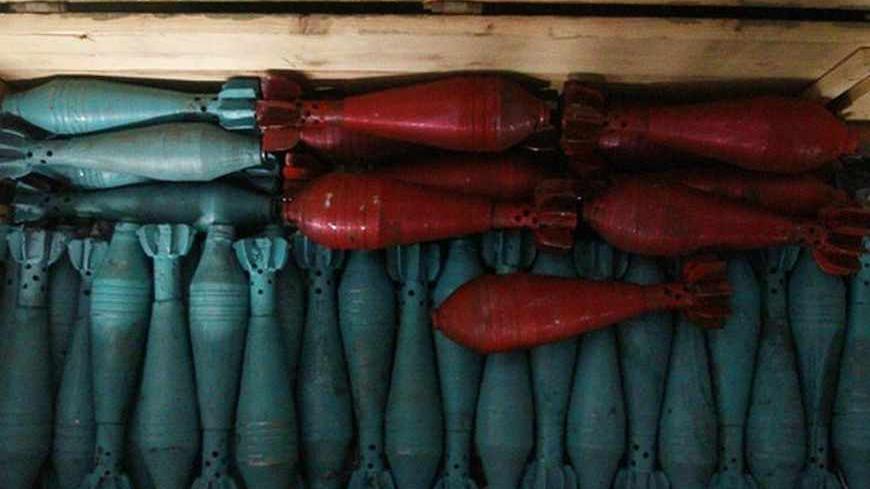 Improvised mortar shells that are colored are seen inside a box at a weapons factory in Aleppo, Sept. 4, 2013. - REUTERS/Hamid Khatib

“To tell the truth, it’s a flat lie when the state claims it does not help provide the opposition with weapons,” Cihat Acikalin, a lawyer in the Turkey-Syria border town Reyhanli, told Al-Monitor.

Turkish Prime Minister Recep Tayyip Erdogan rejected all conjecture regarding the transfer of weapons to the Syrian opposition through Turkey as recently as May 10. Erdogan stressed that Turkey only provides humanitarian help by opening its borders to nearly 300,000 refugees, costing the country roughly $1 billion.

The conjecture about Turkey’s assistance to the opposition peaked after Syria allegedly shot down a Turkish warplane in June 2012.

Erdogan said at the time, “Turkey and the Turkish people will provide all sorts of support to the Syrian people until they free themselves from this persecution, this bloody-handed dictator and his gang.” This statement led to much speculation and brought the Justice and Development Party (AKP) government's policy toward Syria under a domestic and foreign spotlight. Regardless of the allegations, the AKP government staunchly insists that it has not played any role in arming the opposition, let alone had any contacts with radical Islamist groups like Jabhat al-Nusra, which is known as al-Qaeda’s Syrian branch.

“The prime minister and I have repeated this numerous times. Turkey has no relationship with any radical group. I am saying this especially referring to Nusra,” said Turkish Foreign Minister Ahmet Davutoglu on Sept. 10. “This is black propaganda by those circles who want to cast a shadow on Turkey’s humanitarian-based policies regarding Syria.”

Acikalin raised an objection to Davutoglu’s statement. “I may be violating the ethics rule as a lawyer, but I am choosing to talk to you because we believe that the government is suspending the rule of law by providing support to this opposition, including Jabhat al-Nusra, and putting our lives at risk here.” To make his case, Acikalin provided a copy of the indictment with the registration number 2013/125 at Hatay Criminal Court, as well as the copies of the last hearing’s transcript, dated July 5, and a copy of a petition sent by the Free Syrian Army’s (FSA) Ankara office to the state prosecutor in Hatay, dated Nov. 24, 2012.

In brief, the indictment summarizes the following incident: On Nov. 11, 2012, a black bag full of weapons and ammunition was discovered inside a taxi driven by Syrian national Mohamad Ahmad during a routine search at the Cilvegozu border gate, which is roughly 4 kilometers (2.5 miles) to Reyhanli, and about 7 kilometers (4.3 miles) to Bab el-Hawa in Syrian territory, believed to be under the control of al-Qaeda-affiliated militants.

Prior to this moment, someone with the code name Abu Ismail, introducing himself as a member of the FSA, called Mehmet Cuma Saz, who works as a porter and cab driver at the border gate, and asked him to help two Syrians enter the country. Saz arranged for Orhan and Ali Soyler, who work at the border gate, to help him assist these Syrians, carrying their luggage. On that day, Abu Ismail traveled in a white car to the border gate on the Syrian side with Sahel al-Khatib, a FSA member known by the code name Abu Suleiman, and an unidentified woman. Because the woman did not have a passport, Saz and others helped her illegally cross into Turkey.

In the meantime, they also transferred the two Syrians’ belongings from Abu Ismail’s car into Ahmad’s. After the authorities discovered and took under possession the black bag full of weapons and ammunition, Basel Awad, another FSA member, voluntarily came from Syria to the Cilvegozu border gate on Nov. 14, 2012, three days after the incident, and claimed that that bag belonged to him, and that it was mistakenly transferred to Ahmad’s car from Abu Ismail’s car. He told the authorities that they never had the intention to transfer the weaponry into Turkey, but that it was needed for the fight in Syria.

Separately or not, the police also discovered "video recordings in a Nokia E66-1 mobile phone of manslaughter with torture," as well as "a series of videos believed to belong to al-Qaeda ... its training manuscripts, jihadist videos and pictures, as well as a number of documents belonging to this radical right terror organization." The court documents do not specify al-Qaeda as a radical "Islamist" group.

As the investigation picked up, Mehmet Cuma Saz fully cooperated with security officers out of fear of imprisonment. He provided the address where he dropped off Khatib and the woman, whom he helped to illegally enter the country. The police raided the place only to discover even more weapons and ammunition, as well as $367,700; 20,900 euros (27,744); and 300,000 Syrian pounds ($2,300). A Syrian national named Ahmed al-Huli owned the place.

According to the hearing transcript, Huli declared he makes $40,000 to $50,000 per month. He said he’s a tradesman, and he has strong ties with the local authorities. “I saw Huli twice before,” said Saz at the last hearing in July. “One time, I took him to a meeting with the governor [of Hatay] and the mayor. I am a taxi driver and it’s none of my business to pass judgment on what my passengers do or carry with them.”

Saz also drew the attention of the judge to the fact that before these Syrians arrived at the border gate, there were two prior checkpoints — one operated by narcotics police and the other by gendarmerie. “We trust they do a good job. We would not know what these people carry in their bags,” Saz said.

At the July hearing, Huli told the judge, “All the money found in my place is the money coming from foreign countries to help the FSA ... and all the guns, shells and ammunition clips are ‘Made in Turkey’ munitions.” He added, “When I came to Turkey, I did not have a passport, as these institutions in Syria are in the hands of Bashar al-Assad’s men. When I came to Turkey, I called the governor and mayor, and they organized my entrance into the country.”

Acikalin represented Huli in court. Acikalin told the judge: “The state knows well what these Syrians are doing here. This incident occurred due to a disconnect between the security officers and the intelligence officers. And if you pay close attention, the police felt obliged to go to Huli’s house because its address was provided. The police didn’t look for it.”

He continued, “The FSA has an office in Ankara. [In their petition to the state prosecutor, they also asked for their money, weapons and ammunition be returned to them.] ... Ahmet al-Huli is the man who organizes the financial needs and arrangements of the FSA.”

He added, “There is a humanitarian tragedy here, and our regulations don’t show any flexibility for people like those in Huli’s position. Therefore, we are having such problems. It’s not possible not to send arms and humanitarian aid to Syria and be an eyewitness on the sidelines to all that is taking place. Thirteen bags of money were also discovered in Deputy Governor Mehmet Eris’ car the other day. That was also processed. They provide aid supply with that money. Moreover, Eris also serves as the head Cilvegozu local authority, and they organized it in such way that they returned all the money to Syrians. ... This issue has nothing to do with what took place at the border gate in November. This is a separate issue which came to this point through coincidences. ... Huli’s house is known as the FSA’s Reyhanli hostel and coordination center.”

According to the court documents, Awad and Khatib stated that they are members of the FSA. They claimed innocence and asked to be released with the charges withdrawn. They are being tried under several different articles of Turkish criminal law: Article 174, for carrying dangerous material without permission, which carries a sentence of three to eight years; Article 197 for carrying counterfeit money, two to 12 years; and Law 6136 for carrying explosives, sharp materials and other dangerous materials, carrying a sentence of five to 12 years. If the amount of dangerous materials is considered significant, the judge has the authority to double the prison term.

The judge decided in the last hearing in July that the defendants were to be released as the trial continues. The next hearing convenes Oct. 11. The judge also decided that the money that was taken by authorities from Huli's house and Ahmad's taxi be returned to them in full.

“None of those Syrian nationals are in Turkey anymore. They are all gone. It’s evident that the Turkish taxi drivers are innocent in this case. You can’t punish them for carrying people who are engaging in illegal activity,” Acikalin told Al-Monitor. “In short, this case is closed, and the judge decided to free these Syrians, and return their money. This is a straight violation of the rule of law, but they have done it in such a way [to present a scenario] as if they are following the law.”

He added, “All these people are members of al-Qaeda, and the state is supporting them.”

Acikalin continued: “When you study this area closely, you will easily find that this is not the first and only incident of this kind. There are numerous occasions where authorities get inside tips to stop trucks or vehicles carrying explosives, guns and ammunition. There are many in the state structure who understand how wrong it is to yield to radical groups like this. We’re not really talking about innocent refugees here. No one can ever have a problem with them here.

“The problem here is this. If you take all these incidents as being separate from each other, you don't see the full picture. But when you start looking at all these incidents as being linked to each other, and that there is an organization behind it, then you have to also treat this differently under the law. These people are openly taking action against the safety and security of the Turkish state, and we’re letting them go free. We’re suspending the rule of law to topple the Assad regime, but at a cost of putting the lives of our people here at risk.”