Despite such devastating tragedy, the Erdogan government is still trying to defend its Syria policy, writes Tulin Daloglu. 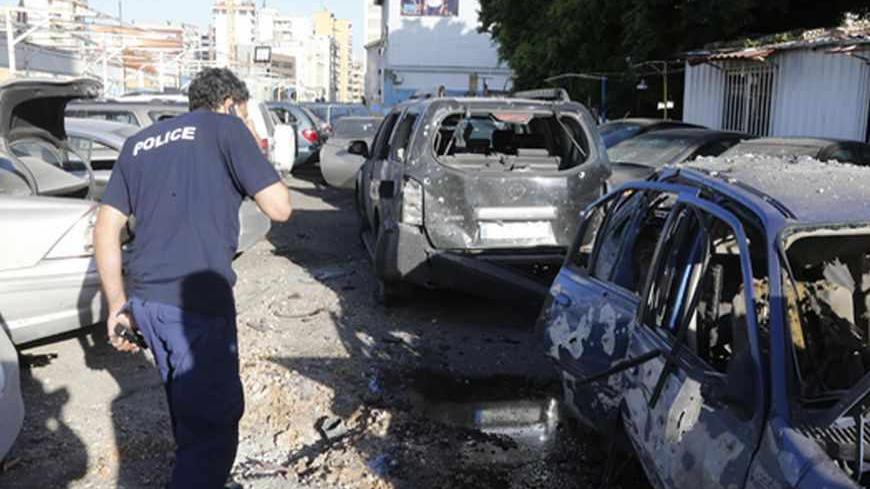 Riot police in Istanbul stand guard during a demonstration against the Turkish government's foreign policy on Syria, May 12, 2013. - REUTERS/Osman Orsal

Two car bombs exploded five minutes apart in the Reyhanli city center, which is only 5 km [3 miles] from the Cilvegozu border gate with Syria, on May 11 at about 1:40 p.m., leaving 46 dead and more than 100 injured.

Its location was also close to the area where Gen. Atilla Ates, then commander of the Turkey’s ground forces, threatened Syria in October 1998 with military action if it did not expel the Kurdistan Workers Party (PKK) leader Abdullah Ocalan. As a country fighting against PKK terror for almost four decades, the maximum number of people lost in a single terror attack in Turkey was in the PKK attack on a military bus carrying 33 unarmed conscripts on the Bingol-Elazig highway in October 1993. All 33 were killed, sending shock waves throughout the country. The heinous terrorist attack in Reyhanli unfortunately not only superseded the maximum number of dead in a single terror attack, but also became the deadliest attack targeting civilians. Interior Minister Muammer Guler said, “735 shops, 120 houses, 62 cars, and 8 state buildings have been damaged,” in the Reyhanli explosions.

Turkish Prime Minister Recep Tayyip Erdogan said after yesterday’s attacks: “This could be the work of those who could not digest the resolution process” with the PKK. The Erdogan government is engaging in direct talks with PKK leader Abdullah Ocalan to end the armed Kurdish struggle against the state, and the government openly criticizes the past government's mistakes in the fight against terror as a means to find a middle ground with the Kurdish nationalists. What is striking, however, is that the Erdogan government does not seem to tolerate any criticism of its Syria policy. Turkey’s geography has always been surrounded by deadly risks, and intervening in Syria’s domestic affairs was not the smartest thing that Turkey could have done for its own security interests. Unfortunately, Ankara’s policies are not so innocent in today’s tragedy. And Turks are questioning whether it was worth it to risk Turkish lives by intervening in Syria’s domestic politics.

“Some circles have focused on two issues: The first is, “Refugees are guilty,” said Ahmet Davutoglu, Turkish foreign minister, on May 12. “Second, the opposition brought to the agenda Turkey’s Syria policy rather than [talking about the] criminals. No excuse can justify to label people who seek refuge in Turkey as targets. That would be a crime against humanity.”

The issue has never been to leave the Syrians escaping from Syrian leader Bashar al-Assad’s death machine in the cold. After the First Gulf War, Turkey had accepted about 300,000 Iraqi refugees, which later led to the increase of the PKK attacks in the country. And the opposition has been asking all along as to whether the government implemented certain lessons taken from that experience. Unfortunately, the control of the camps has been a contested issue and even the United Nations Refugee Agency is not provided full access to these camps. But I know from my own reporting tours for Al-Monitor to these border camps that there are people who are staying there and are going to fight in Syria for a few days before returning again for a rest or medical care. This certainly does not fit into international standards of running a refugee camp. According to official numbers, there are about 200,000 refugees in these border camps, but the total number of Syrians in Turkey is estimated to be over a half million. Turkey shares its longest border with Syria, which is roughly 900 km [559 miles], and it is proven over and over again that these borders are not well-secured.

While there is no justification for the terrorist attack in Reyhanli, which left some children orphaned just a day before Mother's Day, Ankara has to also thoroughly think before scaring those who think differently whether it is worth to risk our civilian population for the sake of toppling Assad and supporting the Syrian opposition with arms. It is not about Assad, but Syria is still a sovereign country. A few days before the Reyhanli attack, an Iranian official in fact drew my attention to Erdogan’s speedy shift away from Assad. Pointing at the speculations of a transfer of a large shipment of weapons across the Turkish border, he told Al-Monitor, “What goes around, comes around,” as if it was a given that Turkey would be targeted at one point. He went onto say, “We don’t understand why Erdogan changed so fast. What happened?”

Although the Erdogan-Davutoglu team deny all allegations that they are playing a sectarian game and seeking Sunni leadership in the region, the fact of the matter is that Turkey’s Alevis have told me numerous times in my travels to the Hatay region that pro-Erdogan imams have cautioned their congregations during Friday sermons that an Alevi, a Kizilbas, should not be the leader of the country. Kemal Kilicdaroglu, leader of the main opposition Republican People’s Party (CHP), is an Alevi from Tunceli. Technically, the Erdogan-Davutoglu team is right to say playing the sectarian card is not acceptable, but what do you do when the words do not match the deeds? Turkey’s current Syria policy is only inviting more trouble for the country.

Just in the past month, Turkish security officers seized massive amounts of guns and ammunition. On April 15, they raided a place in Viransehir, seizing few guns but significant amounts of ammunition. On April 25, they raided a ship moored at Tuzla port only to find enough weapons and ammunition to conduct a full-fledged war. And on May 6, they stopped a truck in Mus full of weapons and ammunition. According to the daily Hurriyet, the Turkish National Intelligence Organization had informed the Turkish authorities that three cars were rigged with explosives in Rakka [about 70 km from Reyhanli], Syria, and the suspects were preparing to carry out attacks inside Turkey at the Gaziantep, Hatay and Sanliurfa border gates.

The Syrian civil war unfortunately started spilling into Turkey also due to Ankara’s reckless policies, and it is likely that Reyhanli will not be the last tragedy in Turkey. In February, 17 Turks died at the Cilvegozu border gate when a car bomb exploded. In June 2012, a Turkish jet fighter was shot down, and there was instantaneous shelling at the border risking Turkish lives. All this tension is also risking the safe harbor for Syrians staying in Turkey.

A security officer, for instance, told Al-Monitor on May 11 that closed-circuit TV can only read Turkish, not Arabic, license plates and that they suspect that these exploded cars could have crossed into Turkey from Syria. Although Interior Minister Muammer Guler said on May 12 that “nine are arrested” in relation to the Reyhanli blasts, and that all are Turks, local Turks are angry about what happened and fearful that their peace at home is threatened. These are also people who are fed up with the PKK fighting and holding funerals for the past four decades.

As the funerals were held in Reyhanli and its vicinity today, there were no reports of any attack on Syrians. Yet, many have already removed their Syrian license plates as a precaution. Lina, a Syrian eyewitness who asked not to be fully named, told Al-Monitor via telephone immediately after the blasts that, “I was just 30 meters [approximately 100 feet] away. The explosions happened 5 minutes apart. It was way too strong. The earth shook.” She said there was an immediate reaction toward the Syrians, and that they could not leave their homes and watched their cars being wrecked. “There were people who lost their relatives, they immediately suspected us. We stayed indoors scared for our lives.” Lina told Al-Monitor that they left for Antakya once things calmed down somewhat and that security forces are visibly present in the streets.

As Erdogan will be leaving on May 14 to meet US President Barack Obama at the White House, this Reyhanli blast will be on top of their agenda. Hopefully, the two leaders will reach a conclusion that there is no military solution to this crisis, and more weapons to the opposition creates more risks for a neighboring country like Turkey — and therefore the best way forward is still diplomatic efforts. Maybe Erdogan can not play a direct role in the US-Russian effort to bring the Syrian opposition and the Assad regime around the table, but it will be worth cautioning Turkey not to escalate the crisis. On May 12, Guler said that “their initial findings show that the organization that carried out this act is a pro-Syrian regime organization and connected to its intelligence.” Once Erdogan says this as the final word, Turkey will have to react accordingly. And Obama may help moderate this reaction.