The Kuwaiti ambassador in Ankara is threatening that Kuwait will withdraw investments from Turkey if his military attaché is expelled after a traffic brawl with a Turkish fighter pilot. 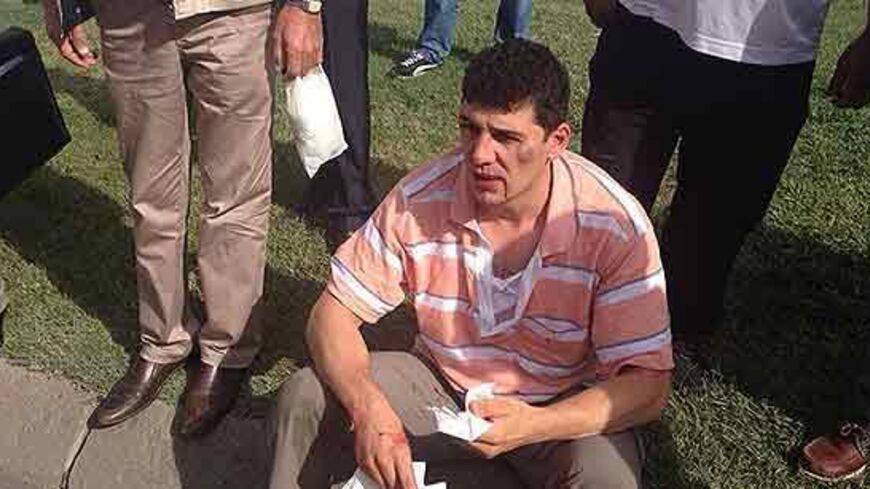 On Sept. 10, Lt. Col. Hakan Karakus, a Turkish F-16 pilot with NATO, and his wife were taking their 6-day-old baby to the hospital for vaccination. As they drove down a busy street in Ankara, a Kuwaiti Embassy car carrying the military attaché passed by, dangerously close. Karakus honked his horn and then stopped to check whether his car had sustained any damage. As soon as he got out, a furious quarrel erupted. Three men from the Kuwaiti car pinned Karakus to the ground and beat him up. As passersby took on the assailants, the bloodied pilot was taken to the hospital by ambulance. The military attaché took refuge in a nearby bank, while the other embassy staff managed to escape.

The incident was soon on television bulletins and demonstrations were held outside the Kuwaiti Embassy. The Turkish General Staff issued a statement condemning the assault, while the Foreign Ministry summoned embassy officials for explanations while Ambassador Abdullah Abdulazeez Al-Duwaikh was out of town.

It turned out the pilot is married to the daughter of Turkish air force commander Gen. Akin Ozturk. Referring to the passersby who helped his son-in-law in the incident, the general said: “Had they not intervened, we might have faced a much more grievous outcome. This is nothing but using diplomatic immunity as a shield for roughneck behavior. I suppose the necessary action will be taken, which may go as far as their expulsion.” President Recep Tayyip Erdogan conveyed his sympathy to Ozturk.

The police recorded the brawl as an incident of “deliberate injury” and “damage to property.” The Kuwaiti ambassador initially said he would “take the necessary action,” but changed his tune a few days later. In an interview with Hurriyet Daily News, Al-Duwaikh warned that deporting the military attaché without a court ruling might lead to the withdrawal of Kuwaiti investments from Turkey. “If anybody hears that this man is deported without court decision, then they will become afraid and will leave Turkey because they won’t trust Turkey after this incident. So it will affect everything,” Al-Duwaikh warned.

With the ambassador’s simplistic reaction, what began as a traffic brawl grew into an economic controversy. Columnist Alaattin Aktas from the financial paper Dunya commented that the ambassador’s bizarre warning lacked any substance. “I checked the amount of direct investments between the two countries. Kuwaiti investments in Turkey since 2008 total $1.4 billion. More than half of them, some three-fourths, came from the branches a Kuwaiti bank opened in Turkey,” Aktas told Al-Monitor. “And in the first eight months of this year, their investments amounted to only $35 million. Hence, they are not even a drop in the bucket. So, are they trying to say the Kuwaiti bank will shut down its branches and leave Turkey if we expel the military attaché?”

Aktas suggested an intriguing explanation as to why the ambassador might have hurled a big threat despite his country’s minuscule investment in Turkey. “When he speaks of investment, he may have something else in mind,” Aktas said. He recalled that the “net error and deficit” section of Turkey’s balance of payments had come to feature massive foreign capital inflows of unexplained origin — $8.2 billion in the first seven months of 2014 and $13.3 billion on a 12-month basis as of July.

“This is basically money that could not be recorded in any category. It could well be money brought in for laundering. There has long been talk about money coming from the Gulf,” Aktas said. “Could this be the investment the Kuwaiti ambassador means? The ambassador is certainly aware how much his country has invested in Turkey. Given that a $35 million investment can in no way hurt the Turkish economy, is he actually referring to some larger, unregistered sums?”

As of July, 83 countries have made direct investments in Turkey. The total investment of the United States, Germany, the Netherlands and Austria is $45 billion. Despite the size of their investments, none of those countries have resorted to threats or boycotts over any bilateral issue.

Yet, Turkey itself has sometimes used the same pragmatist approach as the Kuwaiti ambassador, which leads one to think this could be “the style of the Orient.” In 2009, then-Commerce and Industry Minister Nihat Ergun called for a boycott of Chinese products over the treatment of Uighurs in Xinjiang. Also in 2009, during the Israeli actions in the Gaza Strip, an email campaign called for a boycott of Jewish products. In December 2011, industrial and merchant organizations urged a boycott of French goods over a French bill intended to criminalize “the denial of the Armenian genocide.” Yet, those calls hardly produced any result in the conditions of free market economy.

A diplomat cannot be put on trial in the country of his/her posting unless his/her own government gives its consent. But a country can expel a diplomat without citing any reason by declaring him/her persona non grata. The Kuwaiti military attaché, Amad Ali Almohaid, has not been expelled thus far, but embassy officials said he had taken leave on the occasion of Eid al-Adha. What happens to him will become clear after the Eid.