Turkish government aims to 'save' marriages

Turkey’s government has launched a drive to curb the divorce rate, up 38% over the past decade, but the services it has offered have come under criticism as meddling in citizens’ private lives. 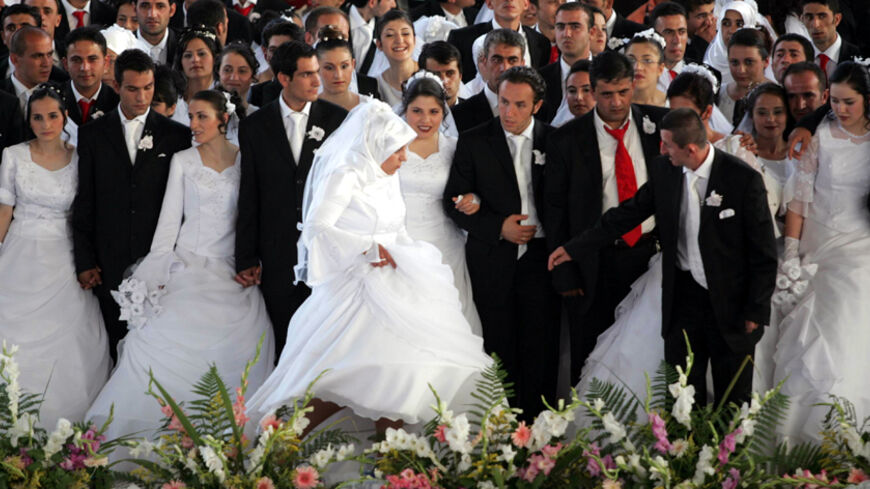 Brides and bridegrooms gather on a stage as they wait for their wedding ceremony in Ankara, Aug. 6, 2006. - REUTERS/Umit Bektas

Alarmed by a 38% increase in the divorce rate over the past decade, Turkey’s Family and Social Policies Ministry has rolled up its sleeves to provide couples with counseling under a project named “Divorce Process Counseling Service.” Under the new arrangement, couples that file for divorce are first sent to a “family counselor” by the court. The ministry has opened counseling centers in all of Turkey’s 81 provinces, where couples receive at least four hours of therapy before making their final decision. The process involves three stages: pre-divorce, court hearings and post-divorce.

Some may raise objections that the subject is none of the state’s business and that the minister and the judge should not meddle in private lives. Others may argue that the practice is designed to discourage women from divorcing abusive husbands. Yet, the ministry is bent on saving marriages by prolonging the divorce process. Moreover, it is unclear whether couples are offered therapy or counseling.

Prominent Turkish psychiatrist Cengiz Gulec, former head of Hacettepe University's department of psychiatry and founder of the Ankara-based Madalyon Psychiatric Center, doubts that state-sponsored counseling will be of any use.

“It won’t work. The ministry is keeping up appearances. The people working at those centers are inexperienced. Marriage counseling is not something like a vaccination. I don’t think those centers will be efficient and useful,” Gulec told Al-Monitor. “The conservative political mentality [of the government] sanctifies marriage. And because things have developed in a way contrary to their concepts of family and marriage, they’ve come up with what they think is a service.”

The Family and Social Policies Ministry is fond of “experiments.” In September, for instance, it launched the "battle against aloneness" with a controversial poster directed at singles. The poster featured black headless silhouettes carrying their heads in plastic bags and the following message: “People living alone consume 38% more goods, 42% more packaging, 55% more electricity and 61% more fuel than others.” Following a storm of criticism, both the poster and the project vanished into thin air.

Turkish men critical of the marriage counseling project look at the issue from a completely different perspective as they voice their complaints, misgivings and even threats on social media. Here are some examples:

“What woman would stay married when she can get divorced and take away even the pants of her husband?”

“The ministry is fixated [on the assumption] that women are innocent and men are responsible for all troubles. They punish men with restraining orders, but where is a man supposed to stay for six months or one year? How could this be a family policy? You must stop pushing people to do even worse things.”

“Thanks to the ministry’s misguided policies, my 22-year marriage is also about to end. A wrong policy on property division, high alimony payments and women always on watch for a chance to divorce. My wife filed for divorce virtually because her divorced friends and their lawyers convinced her that she would get this and that much alimony.”

Time will tell whether the ministry’s marriage counseling project survives, but obligating divorcing couples to see a family counselor has created not only new public jobs but also a new business area for the private sector. A quick search on the Internet with the key words “family and marriage counseling” produces a long list of private companies. Their taglines provide hints of the services they offer: “Oh dear! I’m getting divorced” or “Let’s call in a minute and find the missing piece in your relationship” or “Let’s keep in mind that divorce is the most unpleasant of permissible acts before Allah.”

Gulec said the newly opened offices and the services they offer are not properly supervised, and that counseling couples is much harder and complicated than counseling people on an individual basis.

“Spouses in a marriage crisis may be unaware of or unable to grasp the origin of the problem. Or the relationship may be failing because of bad communication. Only highly competent and well-equipped professionals can help such couples,” he said. “People who see marriage as an institution to be saved at any cost and offer some sort of advice to this end as a private practice, thinking they are doing people a service, could be both ideologically motivated and seriously incompetent.”

“In the current conditions in Turkey, many people of unrelated vocations have come to declare themselves marriage and family counselors after a brief training,” Budak said. “But one cannot practice marriage and family therapy without knowing and having full command of the fundamentals of psychology and the skills it requires. People who lack those qualities but claim to be marriage counselors could do further harm while trying to help. One needs to make sure that their counselors are psychologists or psychiatrists, otherwise, one ends up both wasting time and money and being harmed.”

Not only the Family and Social Policies Ministry but also the Religious Affairs Directorate (RAD) runs centers devoted to saving marriages. The directorate has opened guidance and counseling bureaus attached to the mufti offices in 81 provincial centers and 150 districts across Turkey. Not surprisingly, the guidance RAD offers is based largely on the tenets of Islam. For instance, it preaches that a woman seeking divorce without a “justifiable reason” will be deprived from “the fragrance of heaven.” Or if spouses happen to dislike one another for any reason they are told, “You may not like some of his/her habits, but you may like others. Spouses should strive to see the good sides of one another. A believer should not nurture bad feelings for a believer spouse.”

The “win-win” formula the government used to promote in foreign policy is present also among the advice the RAD offers to married couples, in a sign that it supports the government line on marriage problems resolution as it does in many other realms.

Turkey’s unemployment rate is about 10%, which means some 3 million jobless people. Turkey is one of the three countries with the worst income distribution among Organization for Economic Co-operation and Development members. And a couple of months ago, the Ministry of Health revealed that the number of Turks seeking medical help with psychological complaints has tripled since 2009, reaching 9 million last year.

Given those figures, one wonders whether the government stands at the right vantage point in looking at creaking marriages.