Turkey’s Family and Social Policies Ministry evokes comparisons to Islamist radicals after using the image of headless figures in a controversial campaign “to battle aloneness.” 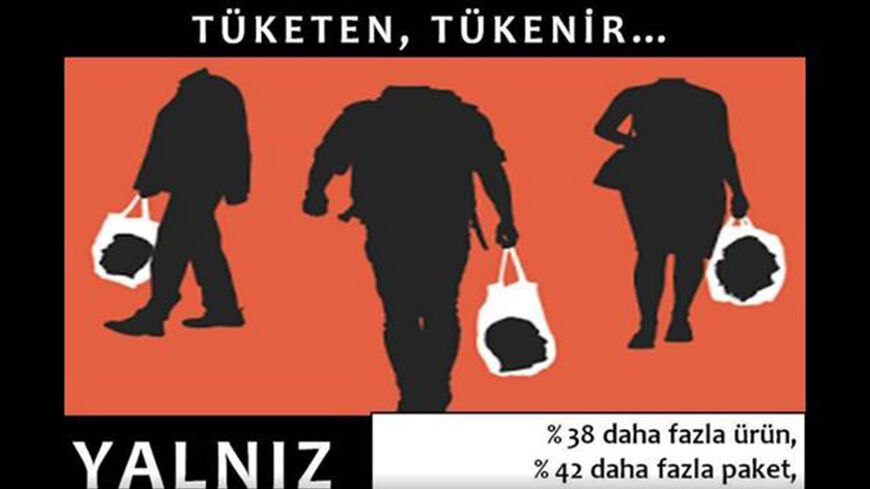 A screen capture of a tweet featuring a poster produced by Turkey’s Family and Social Policies Ministry that reads "Those who consume get consumed," Sept. 13, 2014. - Twitter/@volkitalking

"You are headless. You go about with your heads in a plastic bag. You deplete our electricity, fuel and goods, and produce bigger waste. You disturb the order. Get married!” This seemed to be the message Turkey’s Family and Social Policies Ministry issued to bachelors in a campaign poster last week.

The ministry took its family-oriented mission to such extremes that it could not even manage the ensuing reaction. The campaign, promoting the ministry’s newly launched “battle against aloneness,” included a visual in which people living alone were depicted as black headless silhouettes. The image showed three adults — two men and a woman — scurrying about aimlessly, carrying their heads in plastic bags.

Hell broke loose as soon as the campaign was publicized on Twitter. The headless figures evoked the Islamic State (IS) savagery in neighboring Iraq and Syria, with Twitter users comparing the ministry’s attitude toward single people to the acts of terrorists.

The instant outburst of indignation forced the ministry to delete the posters from its official Twitter account. Yet, it made no statement in response to the criticism, as if the campaign had never existed. The speed of social media, however, made sure the controversy was in almost all newspapers the following day.

The poster featured a capitalized caption above the severed heads that read, "Those who consume get consumed.” And at the bottom, there was this message vilifying singles: "People living alone consume 38% more goods, 42% more packaging, 55% more electricity and 61% more fuel than others.”

The provocative poster — advertising one-sided data ignoring that singles equally work, produce and contribute to the economy — portrayed singlehood almost as a crime. Moreover, the message was not really clear: Was it urging single men and women to tie the knot or to live together.

Encouraging marriage is something the Family and Social Policies Ministry considers a duty. Yet, it has failed badly in curbing Turkey’s divorce rate, which has increased 38% over the past decade.

The latest campaign triggered a deluge of amusing and sometimes scary scenarios as to what else the Justice and Development Party (AKP) government might consider to “stamp out” singlehood. And what would it do to singletons who dig in their heels?

“The ministry is right. But it must do its duties. I, too, want a wife, but the ministry has failed to find me one. The minister, as our elder sister, should help us out,” journalist Fahrettin Fidan, a bachelor who has long “undermined” the economy by consuming as much as a four-member family, told Al-Monitor with tongue in cheek.

On a more serious note, he said, “If they go on like this, one day they may attempt to interfere in the religion, language and professions of spouses, creating some kind of dystopia.”

Suleyman Demirkan, a member of Turkey’s Higher Board of Radio and Television and another “target subject” of the campaign, slammed the ministry for “meddling in what is none of its business.”

“I think the ministry has absolutely no idea what it is doing. Wasn’t this ministry created to address the problems of women? Wasn’t it supposed to fight the murders of women, which have increased 1,500 times under the AKP? Is marrying off singles the ministry’s business?” Demirkan said.

The ministry’s obsession with marriage is not limited to the latest campaign. In November 2013, following an earlier decision to grant loans of 10,000 Turkish lira ($4,480) to newly married couples, the ministry announced that the government would write off the debts of university students who tied the knot, a decision that covered the fees of public dorms and the monthly 280-Turkish lira ($125) allowance university students get from the state. The move provoked indignation among university students, yet the ministry proceeded to award the incentives to those who produced marriage certificates.

Writing on ITU Dictionary, an online platform created by students of the Istanbul Technical University (ITU), one user argued the incentives were designed to benefit conservative students. “It’s the religious folk who get married early, because sex out of wedlock for them is a sin, and like all humans, they need to have sex. They are being married off at age 18-22 to keep them from being horny all the time,” the post said. “Their marriages are not out of love whatsoever. They are keen to have at least three babies, so they just can’t wait for it. And, lo and behold, our state appears to value those people more than any unmarried ones so it writes off debts of some 15,000 Turkish lira for them!”

The ministry appears to seek some sort of statistical achievement by increasing the number of marriages. Though the latest campaign has vanished from Twitter, singletons continue to make fun of it. Here are a few examples:

“Speculation has it that the selfie was a loner’s invention.”

“Those living alone — supposedly — consume more resources. … Could it be because those living together consume each other?”

“At a time when speculation of Turkey-IS [links] has hit the fan, the Family Ministry’s ad for people living alone is a real beauty.”

“They have savagely encouraged consumption and shopping, building one mall after another, and now — ‘those living alone consume more.’”

“You are supposed to rein in the man who kills his wife before worrying about those who live alone.” (This tweet was posted to the ministry.)

“Those living alone devour the core of the water melon alone and throw away the seeded parts.”

“If those living alone consume more goods, electricity and fuel, then married couples are not supposed to have three children either — for lesser consumption!”

“Those living alone made 2.7% of Turkey’s population in 2006 and increased to 4.7% in 2011, according to the ministry survey. Are they worried we are coming in growing numbers?”

“The severed-heads poster is a reflection of [IS] culture. … Congratulations to you, Family Ministry, for this disgusting poster on people living alone!”

“Let’s see if I got it right. Those living alone are to be decapitated and have their heads put in a plastic bag because they waste a lot?”