The struggle between the AKP and the Gulen movement threatens more than 2,000 Turkish schools abroad, which have been seen as the country's most "valuable export commodity" and a "source of prestige." 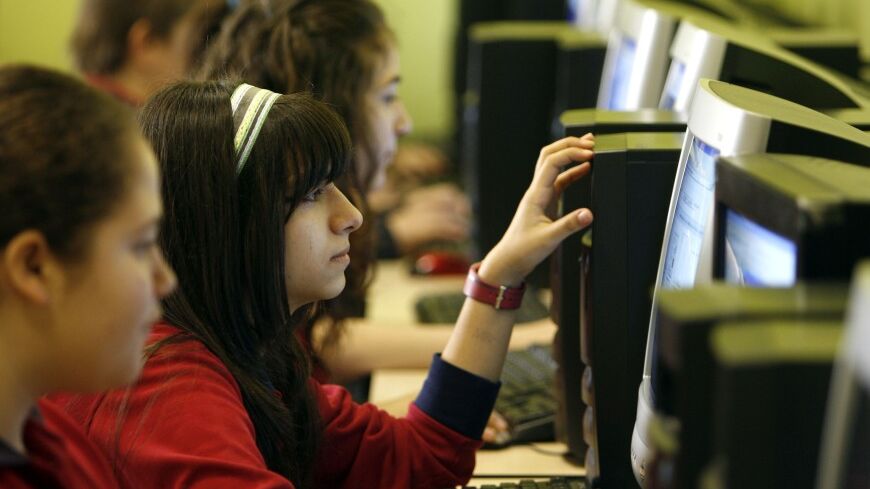 Children are seen in computer class at the Fatih College in Istanbul, a 640-pupil school run by followers of Fethullah Gulen, April 16, 2008. - REUTERS/Osman Orsal

The fate of the Gulen movement’s schools — located in more than 160 countries — is being debated following Prime Minister Recep Tayyip Erdogan's declaration of war in the wake of the Dec. 17 graft probe that targeted individuals associated with his government.

The fear that more than 2,000 schools could be shut down can be traced back to Erdogan’s statements at a Turkish ambassadors conference in January: “This organization has to be exposed. Responsibility for it is on the shoulders of every one of our ambassadors.” According to Gulenists, these schools, which until now had been called “the most successful export commodity of Turkey,” were targeted by the prime minister's directive. They say the Foreign Ministry is "lobbying to close down the schools," directing their accusations at Foreign Minister Ahmet Davutoglu.

On April 10, Davutoglu responded to accusations. “There is no instruction to close them down. Where did this come from? There is no such decision by the Foreign Ministry, but there is one standing instruction: 'Should anyone, doesn’t matter who, insult the Turkish Republic in any manner or work against it, whatever needed to be done will be done.'” He added, "We toiled for every brick laid for those schools."

Davutoglu, who was in New York to rally support for Turkey to become a member of the UN Security Council, said letters had been sent to foreign missions denigrating the government of Turkey. He said, “When we saw the letters sent by some civil society leaders complaining about these schools operating in the United States, I asked myself whether it was necessary to find out what these schools are really doing.” Media outlets close to the Gulen movement interpreted these comments as an admission of the instructions that he denies having given.

Pro-government daily Yeni Safak published a letter alleged to have been sent to foreign missions based in the United States by the Alliance for Shared Values. The letter states that due to the government's adoption of measures to restrict freedoms in reaction to the graft probe, Turkey's 90-year-old democracy was in crisis.

As the debate rages over whether there are official instructions to shut down schools, one was closed in Gambia and schools in Azerbaijan were nationalized. According to the Azerbaijan news agency ANA, 13 tutoring halls and 11 schools, including the Cag-Caucasian University of Baku, were attached to the Azerbaijan International Education Center, which is a part of Azerbaijan’s oil and natural gas corporation Socar.

Erdogan was in Baku making his first post-election trip abroad when he was asked: "Did you ask anything about the Cemaat [Gulen movement] schools?" He replied, "If we have problems in our countries, we will discuss them among ourselves.” Azerbaijan President Ilham Aliyev was more explicit. "We don’t allow any step that could cause the slightest harm to our relations. We didn’t allow it and won’t allow it," he said.

According to daily Milliyet’s Abdullah Karakus, Erdogan went to Baku with a special dossier on the Cemaat’s schools and asked Aliyev to take measures against them. Karakus quoted a source in the prime minister's office as confirming, “These schools were on the agenda of the meetings. The Azeri side is working on it.”

Erkam Tufan Aytav, vice president of the Cemaat-affiliated Journalists and Writers Foundation, said that Erdogan issued directives to close down institutions belonging to the Cemaat, and that Davutoglu had been working diligently with the ambassadors to this end. According to Aytav, the state had no role whatsoever in opening these schools, but letters sent from former Presidents Turgut Ozal and Suleyman Demirel to leaders of certain countries where schools were opened played a role in building trust.

Aytav added, "Under free-market conditions, these schools have become a brand. They are the biggest export commodity of Turkey. They are secular schools that adhere to the curriculum of countries where they operate. They are institutions that represent Turkey wonderfully." He then quoted an unnamed African leader, whose child attends one of these schools, as responding to the closure request as follows, "I know these schools. Why should I close them? If you push too hard I will close down your embassy instead."

There are many in the opposition who also oppose closing the schools. One is former Minister of Culture Ertugrul Gunay, who resigned from the Justice and Development Party (AKP). Now an independent parliamentarian, Gunay said, "Closing Turkish schools is yet another adverse example of our erratic foreign policy. These schools were filling an important void in Turkey’s education and culture needs. In earlier years, we all visited these schools and we were proud of them."

Although the schools were set up by private entrepreneurs affiliated with the Cemaat, until Dec. 17 the Turkish state did not withhold support from what it proudly called “Turkish schools.” The foreign minister made a point of visiting these schools in his foreign travels. Students participated in the International Turkish Olympics, which have been held since 2003. Erdogan harshly declared that the government would not allow these Olympics to be held in Turkey. “They can’t hold the Turkish Olympics from now on. That is done with.”

For many years, in countries with no Turkish embassy, these schools served as de facto diplomatic missions. It would be the first place that Turkish officials and journalists would go to for assistance. To be honest, these schools did not deny assistance to anyone. Now these schools are likely to be victims of a brutal struggle, in which the government is accused of “corruption, illegality and heavy handedness,” and the Cemaat is charged with “illegal tapping, plots, creating a parallel state and launching investigations with fraudulent documents.”