Turkey's Religious Affairs Directorate intervenes in the warfare between the Erdogan camp and the Cemaat with its sermon on Friday. 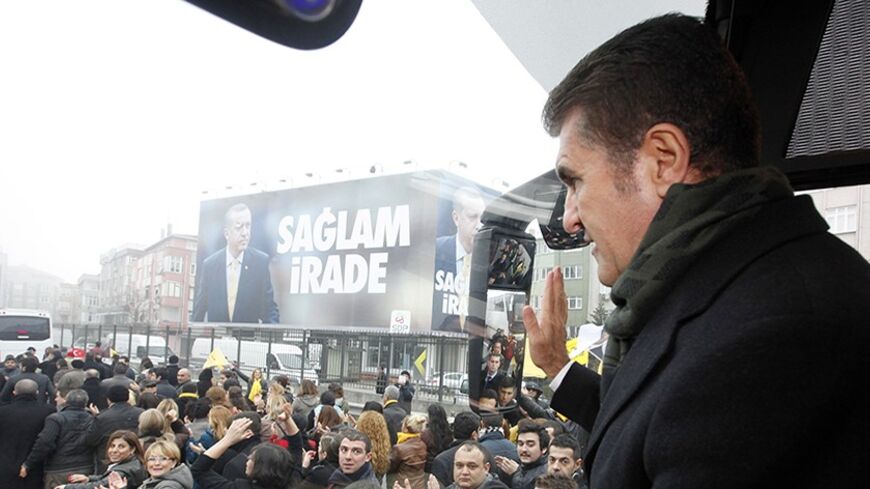 The separation between mosque and state is growing thinner every day in Turkey. The Religious Affairs Directorate, for example, recently intervened in the political warfare between the Islamist camp of Prime Minister Recep Tayyip Erdogan and the followers of US-based Sunni religious leader Fethullah Gulen, better known as the Cemaat. This intervention came in the form of a Friday prayer, which on Jan. 31 was read at mosques across the country:

“A Muslim is the brother of another Muslim. He does not torment him, or isolate him. When he meets his religious brother’s needs, God watches out for him,” the imams read. “The loyalty of brotherhood is the inheritance of our beloved prophet. … Brotherhood is the ability to present a smiling face at difficult times or to say a few nice words. … Brotherhood requires being sensitive about others' needs.”

Since the corruption and bribery probe became public almost two months ago — alleging the government’s direct responsibility in this supposed dirty-works network — Erdogan has framed the investigation as an “attempted coup” carried out by the Cemaat’s strong presence in the judiciary. With the March 30 local elections quickly approaching, to be followed by presidential elections — the first by direct public vote, possibly in June — and then a scheduled general election in 2015, the Erdogan camp does not want the votes to be divided, as it aims to keep the ruling Justice and Development Party (AKP) strong at the ballot box.

“We shall act like one body when we face troubles in this … world with affection, grace and compassion,” the sermon continued. “Brotherhood means: Don’t get into a superiority contest … ; don’t envy each other; don’t hate each other; don’t turn your backs to each other … in whatever circumstances there may be, don’t leave your brother alone.”

Erdogan believes that the Cemaat, which he had allowed to grow stronger in key state institutions such as the judiciary and the security establishment, is backstabbing him. He has now undertaken a bold mission to strip the Cemaat of its power in the judiciary and elsewhere; so far, he has had dozens of prosecutors and more than 2,000 police officers reassigned. Erdogan vehemently argues that the Cemaat has established a “parallel state,” and that if he does not take action against it now, no government or entity perceived as going against the Cemaat's interests will be safe in the country.

On that point, while there seems to be a consensus in Ankara’s beltway over the Cemaat’s questionable intentions and influence in key state institutions, it is ironic that the main opposition Republican People’s Party (CHP) has only attacked the Erdogan camp on the corruption saga, leaving the Cemaat out of the inquisitive spotlight. Ironic, again, is that the Cemaat’s strength at the ballot box is no more than 5% of the nation's eligible voters. Moreover, the Cemaat is now perceived as being against everyone — the government, other religious movements and so on — and it seems that the Gulenists are the ones who have lost face before the people, perhaps even more than the AKP.

After all, whether the AKP helped the Cemaat increase in strength and size or not, it is widely believed that the Cemaat’s network in the judiciary put more than 200 retired and current military personnel behind bars — including Ilker Basbug, former chief of general staff, who was convicted of leading and forming a terrorist organization. In sum, there is obviously a troubling network in the judiciary that denies people the right to a fair trial, to say the least. While CHP leader Kemal Kilicdaroglu has asked the government to intervene in the judicial process and make it possible to restart it from scratch — specifically, the Ergenekon trials that put these military officers and others behind bars — he has refrained from giving Erdogan support to break the Cemaat’s influence in these key state institutions. While it is not a crime to be a member of any religious movement, including Fethullah Gulen's, it is wrong to allow a group to follow priorities that don't put the constitution and rule of law first.

In Turkey's political chambers, there is a widespread rumor that the CHP’s Istanbul mayoral candidate, Mustafa Sarigul, looks poised to win the elections, as the Cemaat will support him against the AKP’s candidate, current Mayor Kadir Topbas. Surely, the Sarigul election campaign is not putting all its eggs in one basket — support from the Cemaat — but the fact of the matter is that the traditional CHP constituency has little sympathy for the Cemaat’s base and the role it played in ending the military’s tutelage in Turkey. And if it's true that the Cemaat constitutes a maximum of 5% of the voting public at the ballot box, CHP’s winking at the Cemaat for the sake of winning an election looks like poor politics and an inability to produce real solutions to the country’s problems.

In sum, Erdogan was wrong to help the Cemaat grow bigger and more influential in state institutions when it fit his political interests. It does not look good that he has taken a position against the Cemaat only after coming under a corruption investigation, which may reveal the truth about this alleged dirty-works network. That said, the prime minister is right to take on the Cemaat now, and he deserves to be supported. The political opposition could keep the heat high on the corruption probe while creating its own agenda in bringing the allegations about the graft probe to the public's attention.

The people, however, are now left with a bleak political landscape, as it appears that neither the ruling party nor the opposition is campaigning to resolve the issues that have broken the people’s trust in the judiciary and further weakened the public's ties with the state. With that, the CHP seems to have also joined the bandwagon of helping erode the separation between mosque and state, to say the least.