The graft probe seems to have had no impact on people’s support of Prime Minister Recep Tayyip Erdogan. 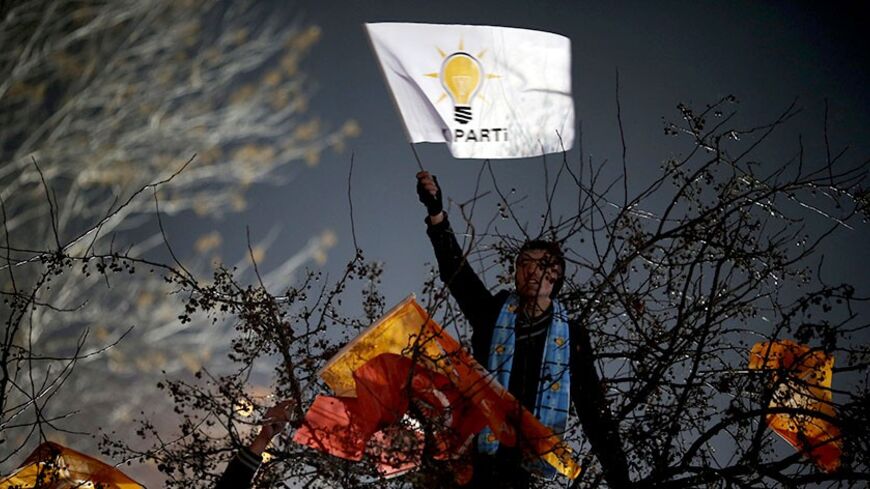 A government worn out by corruption and bribery allegations is usually expected to lose votes and even the chance of a re-election. Turkish Prime Minister Recep Tayyip Erdogan, however, beats this chain. While it may be too early to call the result of the upcoming local administrative elections in March, and the scheduled general election next year, it may be only fair to speculate that if there were to be an election today, Erdogan would easily come to power in a single-party government for a fourth consecutive term.

Al-Monitor took to the streets of Ankara, visiting various districts such as Aktepe, Sincan, Eryaman, Etlik and Kecioren, where the Justice and Development Party (AKP) constituency is strong, and talked mainly to more than a dozen bakkal. A bakkal is a small neighborhood grocer; his store is where you find almost everything for your daily needs. The bakkals are considered the mirror reflection of their neighborhoods and have a knack for knowing the fabric of their immediate society.

The questions were quite basic, inquiring about people’s perception of the graft probe that became public on Dec.17 as well as the so-called war between the Sunni religious leader Fethullah Gulen and Erdogan, and whether the opposition has a chance to score better in the upcoming elections. Surprisingly, more or less the same answers kept being repeated.

In sum, people strongly believe that there is an international plot aiming to bring down Erdogan. They seem to have bought the prime minister’s line of attacking this corruption and bribery investigation, linking it to the Gezi Park protests — just as he argued back then — and that there is a foreign hand attempting to cut short the country’s economic success. Moreover, there is almost no one questioning the truth behind corruption allegations.

“Look, all the governments have been corrupted in this country. [That] one is more corrupt or less does not matter,” Huseyin, a bakkal in the Aktepe district of Ankara told Al-Monitor. “At least this government has brought us the services. Our streets are clean now. We started to live like humans. And we are grateful to our prime minister for bringing freedom of the headscarf for our women.”

Others shared the same sentiment, making it abundantly clear that Erdogan has won their hearts for life. But the reshuffling of the police force and the judiciary targeting those presumed to be the followers of Fethullah Gulen raises the problem of pious Muslim men targeting another group of pious Muslim men. The point is, unlike the Gezi Park protesters, the Fethullah Gulen movement and the Erdogan camp are both considered devout Muslims.

Veysel, a bakkal in the Eryaman district of Ankara, told Al-Monitor, “Why is [Gulen] not coming back to the country? There is no legal handicap that prevents him from coming back to his home country. But, they have done wrong staying in the United States longer than needed and allowing [themselves] to be used as a pawn of the imperialists and Israel.”

It was clear in these conversations that people were not in grasp of all the Byzantine intricacies taking place since this graft probe hit the surface, and since the government started using its power in full force by removing at least 1,700 police officers from their posts and trying to amend the constitution. People, in short, sound overdosed with the speed of these changes, and they sound like they prefer to listen only to Erdogan.

The prime minister is in total denial of any corruption allegation. On Jan. 17, addressing thousands of people marking the 100th anniversary of the Imam Hatip High Schools, he said, “If any of my children were to get involved in corruption, I would immediately reject him from being my son.” That statement falls in line with the many conversations that Al-Monitor encountered with the bakkals of Ankara in the AKP stronghold districts. The repeating beat was that if the prime minister were to have done something wrong, how could he face them as a practicing Muslim and lie to them while looking in their eyes? With that, people seem to have chosen to believe Erdogan and consider the rest as the plot of dirty foreign hands targeting the country’s peace and economy.

Last but not the least, it may also be only fair to observe that the main opposition Republican People’s Party (CHP) has failed to win any votes in these AKP stronghold districts of Ankara, even at a time of crisis like this. No one reported, for example, that they have seen a sign of CHP’s Ankara big-city mayor candidate, Mansur Yavas. There is, however, a chance that people could vote for the Felicity Party, another Islamist-based party, which is more staunchly grounded in the ideology.

“Does [CHP Leader Kemal] Kilicdaroglu believe we are so illiterate that we don’t understand what kind of a game he is playing with the Fethullah Gulen movement?” Yasin, a bakkal in the Kecioren district of Ankara, told Al-Monitor. “We’re not stupid. He is so scared of losing votes that he can’t say that the Gulenists were wrong attacking our prime minister and grouping in our state institutions, downplaying the rule of law.”

All these conversations support a public opinion poll conducted by ORC between Dec. 24 and 31, which showed AKP winning Ankara by 46% and Istanbul by 47% in the coming local elections.