While the ruling Justice and Development Party (AKP) may fear losing votes in upcoming local elections, the government can retaliate with its own legal campaign against the Gulen movement. 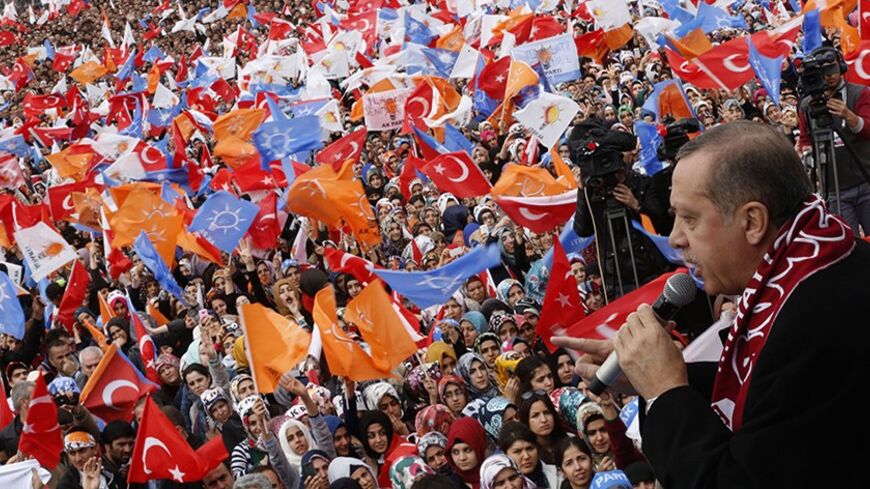 The Turkish elections to be held in less than two weeks, on March 30, are “local elections” in name only. There is currently such a hardened and ill-tempered political and social polarization in the country that the elections are being attributed the function of a general election — that is, a referendum to decide the fate of Prime Minister Recep Tayyip Erdogan. Turkey has not held local elections in such a tense and foul atmosphere since 1946, when the country adopted a multiparty system.

One cannot attribute this tension to a single factor. All the social and cultural contradictions that played contributing roles in the 2013 Gezi phenomenon, which affected the entire country, are now dictating the policies and campaigns of the government and opposition parties. The rage that led to the events surrounding Gezi Park has unexpectedly resurfaced on the eve of the upcoming elections. One example is the March 12 funeral attended by hundreds of thousands of people for Berkin Elvan, a 15-year-old hit in the head by a police-fired gas canister on June 16, 2013, and who remained in a coma for 269 days.

This example is not to deny the significant part of this anger directed against the government as a result of the widespread corruption and bribery cases, which have led to the resignations of four government ministers, and the related tapped telephone conversations leaked to the public on an almost daily basis. The public's access to these discussions — which deal with corruption, bribery, tampering with public tenders and construction permits, extortion and censoring of the media — are courtesy the clash between the Justice and Development Party (AKP) and the Cemaat, the Gulen movement.

The AKP-Cemaat conflict is the number one cause of the unprecedented maliciousness of the election campaign. Erdogan and his associates claimed that it was insignificant that the graft investigation emerged on Dec. 17, 3½ months before the elections. Their assertion suggests, however, that the operation was actually a political maneuver aimed at reducing AKP votes.

Erdogan’s response to events has been to declare an all-out war against the Cemaat. Graft probes were blocked through direct interference with the judiciary; hundreds of prosecutors and thousands of police were removed from their posts on suspicion of being linked to the Cemaat. Specially empowered courts were closed because of possible Gulenist influence over them.

There are now reports that the next round of purges will strike at the schools attached to the Ministry of National Education. Insinuations are being increasingly made in government circles that a widespread arrest campaign against the Gulenists will be launched following the elections.

The investigations into government corruption, the evidence made public and the incessant leaks of voice recordings have delivered a blow to Erdogan's legitimacy and his inner circle that can only be salvaged by acquittal in a court of law. This may explain why Erdogan is pursuing a systematic effort to demonize and mar the legitimacy of the Cemaat.

Some of Erdogan’s characterizations of the Gulenists in his statements and speeches reflect his tremendous anger and hatred for the group and its members. He has, for example, called them blood-sucking leeches, vampires, assassins, gangs, traitors, immoral, neo-Ergenekonist (implying the alleged illegal military group seeking to create the atmosphere for a coup), parallel structure, false prophet (referring to the Cemaat leader, Fethullah Gulen), viruses and worse than Shiites.

It is something of a historical joke that until the recent past, Erdogan was in an alliance with the people against whom he is now railing, battling their common foes of military tutelage and Kemalist secularists. The relationship, however, was an asymmetric alliance, comprised of two very different organizations: One was an elected political party, the AKP, which was assumed to be in compliance with the constitution and the law, and the other was an Islamic sociopolitical movement not beholden to the same laws, the Cemaat.

Naturally, their ongoing conflict is as asymmetrical as their alliance had been. The two sides are employing weapons that the other side cannot use. Moreover, the one has no defense (or only a feeble weapon) against the arsenal of the other side. This is why they are able to inflict massive damage on each other. One can thus foresee that there will be no winners in this war. One side’s loss will not mean the other gains the upper hand. Both will lose, but their losses will be of natures that do not allow comparison.

One might be able to compare the loss of legitimacy they have inflicted on each other, but the costs they will incur will not be the same. For example, in the upcoming elections, the Cemaat is not participating as such; it is not a political party. The AKP therefore cannot defeat the Cemaat at the ballot box, but it has the capacity to launch arrest campaigns against its members on the grounds of forming an illegal organization.

If in local elections the AKP’s nationwide vote distinctly drops, it might well trigger dynamics forcing Erdogan to relinquish power. The Erdogan government bases its legitimacy on the proportion of votes it has received in previous elections, thus deriving its power from the ballot box. The Cemaat on the other hand is trying to prove through the elections that Erdogan no longer has a voter base on which he can depend.

To deliver a stinging blow against Erdogan at the ballot box is the main goal of the struggle the Cemaat has engaged in prior to the March local elections. It will then sustain the battle in the two-tier presidential elections in August. To inflict a maximal loss of votes and mayoralties for the government, the Cemaat has mobilized its extensive social networks — which reach into the country's tiniest settlements — encouraging followers to vote for the party deemed closest to the AKP.

Nobody should be surprised that the struggle is becoming more vicious by the day as March 30 approaches. In this context, the words of Deputy Prime Minister Emrullah Isler reported March 17 in Milliyet are possible harbingers of what might be in store: “They [the Cemaat] were removed from the decision-making mechanism. Naturally, we will now move on to lower levels. … It was said that they will be dragged out of their lairs [a reference to an Erdogan remark]. If our people give us solid support in the March 30 elections, which we see as a survival issue, we will fight alone like lions. … The Ministry of Interior has already reported crimes of espionage, abuse of authority, leaking information, attacks on personal rights. All those involved in these activities will be brought before the courts one by one.”

From these words, one can easily discern that should the AKP emerge from the March elections with what is deemed an adequate percentage of the vote, it is prepared to move against the Cemaat with all its might.

From additional remarks by Isler, it is also easy to see that the government is concerned about possible new attacks by the Cemaat prior to the elections: “[The] March 30 elections have become a fateful one. It is especially a matter of life or death for them [the Cemaat]. This is why they will do anything they can until March 30. … To be honest, in today’s atmosphere I expect some extraordinary events, incidents in Turkey, in particular aiming at the election results.”