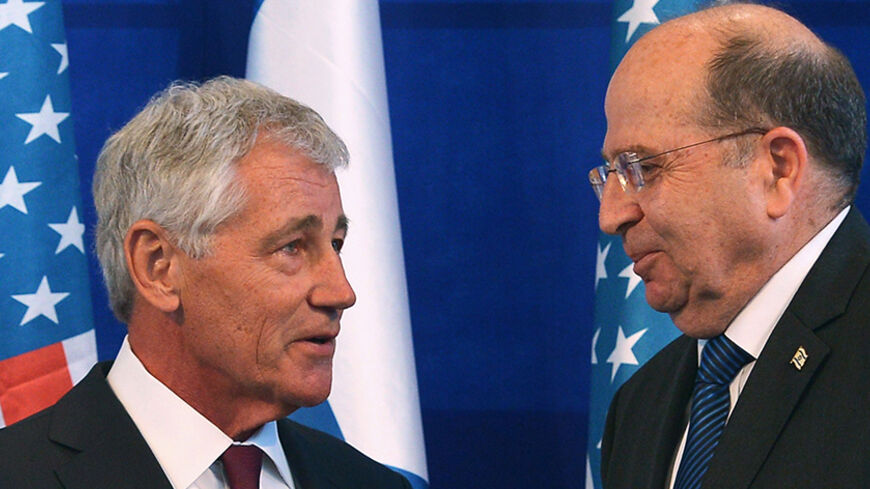 Israeli Defense Minister Moshe Ya’alon has implied that Turkey was responsible for Hamas’ alleged preparations for a coup against Palestinian Authority President Mahmoud Abbas. “Turkey is playing a cynical game,” Ya’alon told US Secretary of Defense Chuck Hagel on Oct. 21, criticizing Turkey for the support it provides to Hamas. “Hamas moved its terror headquarters from Damascus to Istanbul, in Turkey, a NATO member, where it is represented by Saleh al-Arouri, who orchestrates terrorist attacks against Israel from there and attempted to instigate a coup against Mahmoud Abbas in Judea and Samaria.”

Fadi al-Husseini, Palestinian Embassy spokesman in Ankara, however, told Al-Monitor that the Palestinian side has no knowledge of any Hamas coup preparations against Abbas. “We also heard about this alleged coup preparation from the media. The Israeli media also link the death of three Israeli teenagers to Arouri, but there is so far no evidence that Hamas was involved in these incidents,” Husseini said.

Israeli Prime Minister Benjamin Netanyahu explicitly blamed Hamas for the teenagers' deaths. "These teenagers were kidnapped and the kidnapping was carried out by Hamas members. Hamas denials do not change this fact," he said June 15.

Netanyahu also said, "Those who perpetrated the abduction of our youths were members of Hamas — the same Hamas that Abu Mazen [Abbas] made a unity government with. This has severe repercussions." Indeed, Israel began its Gaza operation in July 2014, killing more than 2,000 Palestinians.

“We see that Israel is increasingly sliding away from the peace process. They do not trust the Palestinian side as a real peace partner, nor do they have any trust in the United Nations body — specifically the UN Human Rights Council,” said Umut Uzer, an associate professor at Istanbul Technical University's department of humanities and social sciences. “It is no longer even possible to expect a return to a more balanced politics toward Israel. Neither side has any trust left. Turkey has clearly sided with the Palestinians, but the current government here has also taken the side of the Palestinians favoring Hamas.”

Uzer said that although the Turkish government clearly sides with Hamas and considers it the legitimately elected representative of the Palestinian people, it conveniently forgets about Hamas’ terrorist activities. Uzer explains this approach as a part of the Justice and Development Party’s (AKP) ideological and emotional attachment to the group.

“Having said that, frankly speaking, it is a misconception to suggest that the Turkey-Israel relationship soared due to [Turkish President Recep Tayyip] Erdogan coming to power. One needs to admit that this relationship has no real counterpart on the Turkish streets. It was put together with a bureaucratic intention considering the country’s interests,” Uzer said. “Yet Turkey’s liberal, left and secular crowds are also sensitive about the Palestinian cause. They see the Palestinians as victims of World War II, and they would like to see their suffering come to an end. It is to say that, even if Erdogan were not in power, the relationship between these two countries would not show any real progress in the absence of a peace deal between Israelis and Palestinians resolving this issue once and for all.”

In the meantime, Ankara has kept quiet on Ya’alon’s accusation that Turkey was indirectly aiding Hamas’ preparations for a coup against Abbas. If proven, it would strike a significant blow to Erdogan’s strong condemnations of coup attempts, whether in Turkey, Egypt or elsewhere.

Since the deadly 2010 Mavi Marmara incident, Turkey and Israel's political and diplomatic ties have soured. Some have speculated about a potential finalization of a deal, whereby Israel would give significant financial compensation to the families of those killed on board the Mavi Marmara. In turn, the countries would then reinitiate diplomatic relations at the ambassadorial level. Ya’alon’s statement makes it clear that we are nowhere near that day.

Uzer argues that Turkey turning a complete blind eye to Hamas’ terror activities is not good for peace efforts in the region. “The United States is certainly the real partner that could influence Israel and move things around. Turkey could have helped things with its soft power, just like the AKP did in its first years,” Uzer said. “On the other hand, Israel is increasingly becoming isolated. … The political right is getting stronger in Israel, and that means there is currently no strong peace camp there.”

Embassy spokesman Husseini said that, in hindsight, Turkey and Israel's soured political relationship does not serve the best interests of the Palestinian cause. “We wish to see more of our friends to carry our messages and talk to Israel,” Husseini said. “A good relationship between Turkey and Israel would have benefited the Palestinian cause and help end the conflict.”