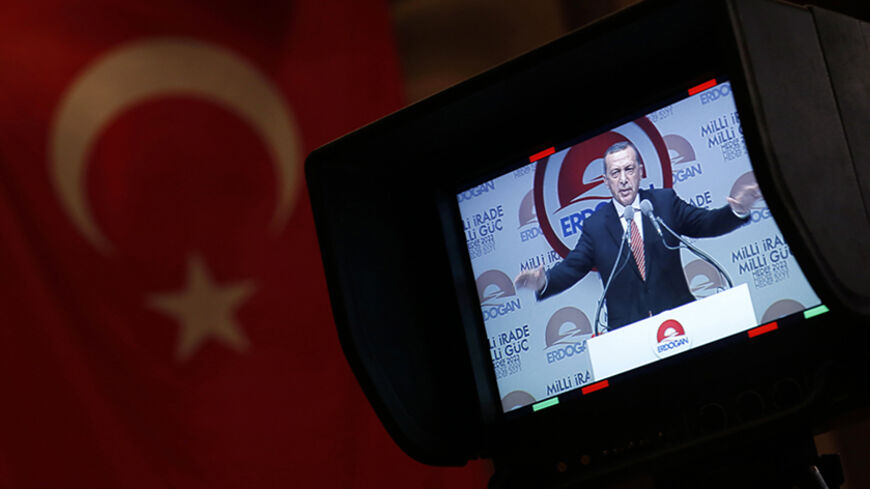 Turkey's Prime Minister and presidential candidate Recep Tayyip Erdogan is seen through a camera monitor as he makes a speech during a meeting to launch his election campaign in Istanbul, July 11, 2014. - REUTERS/Murad Sezer

Despite the newest round of violence between Israel and Hamas, Turkish Prime Minister Recep Tayyip Erdogan is keeping a measured narrative in his response. “On one side, Israel would wish to normalize its relations with us, on the other side these escalations continue — as long as Israeli aggravation continues, it is not possible to normalize the Turkey-Israel relationship,” he said July 11. “Our conditions were clear: apology [for the 11 dead from the May 2010 Mavi Marmara incident]; compensation and lifting of the blockade to Palestine [Gaza]. I was told that the paper was waiting at [Israeli Prime Minister Benjamin Netanyahu’s] desk, but this [Israeli operation] takes away all of it.”

This was a much calmer tone compared to an Erdogan who lost his temper with Israeli President Shimon Peres in January 2009 at the World Economic Forum in Davos and stormed offstage during a discussion on Gaza, saying, “When it comes to killing, you know well how to kill!"

On July 11, however, Erdogan echoed his old rhetoric, questioning why Hamas’ rockets hadn’t killed any Israelis. “How many Israelis have died? Is there any Israeli who died [by Hamas rockets]? None. But the number of Palestinians killed is almost 100. [Israeli] lives are based on lies. They’re not honest.”

The Turkish Foreign Ministry also followed a measured rhetoric. Since the conflict started by the abduction of three Israeli teenagers on June 12, the ministry has kept warning both sides to do all they can to prevent further escalation of the violence. “We call on Israel to put an immediate end to its attacks carried out as a method of collective punishment against Gaza, and also call on the international community, including the United Nations first and foremost, to expeditiously intervene and to warn against and urge for the cessation of these attacks,” the ministry's July 8 statement read.

After the teens' abduction, Israel cracked down in the West Bank with thousands of homes being searched, and 400 Palestinians — most of them activists of the militant Hamas group that Israel holds responsible for the kidnapping — being arrested. On June 30, the Israeli army found the dead bodies of these Israeli teenagers in a field west of the West Bank city of Hebron.

On July 1, the Turkish Foreign Ministry released a written statement: “It is important that the perpetrators of this act are caught as soon as possible and that this incident is not used as a pretext for collective punishment against our Palestinian brothers who were not involved in it in any way.

“In this extremely sensitive period when tension has been escalating in the Middle East, all parties should act in restraint and sensibly by driving lessons from sufferings in the past. Every effort must be made to ensure that this heinous act does not lead to new clashes with grave consequences and that the peace process resumes as soon as possible aiming at lasting peace in Palestine.”

On July 2, a Palestinian teenager was kidnapped and burned to death in a suspected revenge killing by Israeli extremists. Israeli police acted fast in search of those responsible and on July 6 arrested six extremist Jews allegedly responsible for the murder. In the meantime, the Foreign Ministry released yet another written statement on July 3 condemning this murder. “We’re deeply concerned that these murders might set off a new spiral of violence,” the statement read. “Necessary efforts should be exerted by all parties to reduce the increasing tensions in the region, especially in East Jerusalem. … We reiterate our call on all parties to act with moderation and common sense in this sensitive environment.”

Despite the Erdogan government’s open and unequivocal support to the Palestinians, it is quite noteworthy that Erdogan has chosen a calmer tone — for now — this time around, which coincides with the runup to Turkey’s presidential election in August.

Fadi al-Husseini, a Palestinian Embassy spokesman in Ankara, told Al-Monitor on July 10 that Erdogan discussed the latest developments in Gaza with Palestinian President Mahmoud Abbas, and that Abbas would be traveling to Ankara on July 18 for further discussions, seeking Turkey’s help for a cease-fire.

However, Turkey’s politically frozen and diplomatically loose ties with Israel make it unlikely for Ankara to have any effect on Israeli behavior. Selahattin Demirtas, presidential candidate from the pro-Kurdish People's Democracy Party, said July 11 that Turkey has lost its influence over Israel and that works against Palestinian interests. “It is certainly not enough to condemn and seek the end of these attacks,” Demirtas said. “It is just a dreadful situation that a country like Turkey, which claims to be a regional actor, has no influence left on the Israeli-Palestine conflict. We are watching with sadness that Turkey’s statements make no impact or [are not] taken seriously. This shows the grave situation of Turkey’s foreign policies.”