In a first for Turkey, a state-run bank is poised to enter the Islamic banking sector, and other major state lenders are expected to follow. 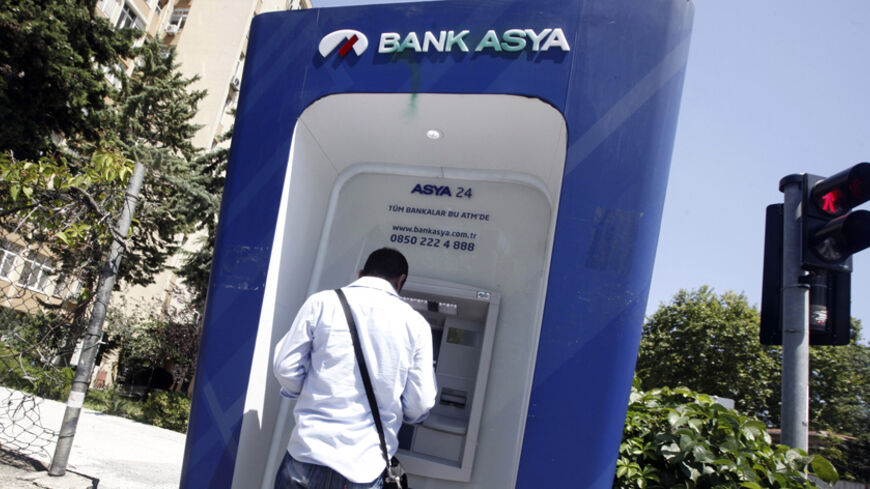 Turkey’s government has moved to expand Islamic banking by inviting public banks into the sector. Earlier this month, the largest state-run bank, Ziraat, received approval to establish an Islamic unit, a landmark move in a country where public lenders have so far stayed out of the Islamic finance realm.

According to the Banking Regulatory and Supervision Agency’s decision, published Oct. 15 in the Official Gazette, Ziraat Bank got permission to set up a “participation bank” with $300 million in capital. Islamic banks are called “participation banks” in Turkey, a moniker for interest-free banking that refers to participation in profits from certain financial instruments.

Ziraat has nine months to establish the new bank. But a key question remains unanswered: Where will the capital come from? Ziraat is a conventional bank, whereas paying and charging interest is prohibited in Islam. How is a bank that charges and pays interest supposed to create a bank that rejects interest? If Ziraat’s interest-based earnings are considered illicit, how is it going to establish the capital of an interest-free bank?

To resolve the conundrum, the Treasury is reportedly planning to provide the required capital. The Treasury, too, operates on the basis of interest — but perception is what matters. Hence, the Treasury is expected to transfer $300 million to Ziraat, a sum that will first figure in Ziraat’s assets and then become the capital of the prospective participation bank.

The government, seeming quite enthusiastic on the issue, is not expected to stop there. Another state-run lender, Vakifbank, is planning to follow in Ziraat’s steps. Things are likely to be easier for it since Vakifbank’s main shareholder, the Directorate General of Foundations, will provide the capital for the planned participation bank without stumbling over interest snags.

Simultaneously or shortly after, the third state-run bank, Halkbank, is expected to follow suit as the state descends on the sector with all its might.

The government has already submitted a bill to parliament to clear legal hurdles in Vakifbank and Halkbank’s path to Islamic banking.

Faik Oztrak, deputy chairman of the main opposition Republican People’s Party and a former Treasury undersecretary, argued that the state-run banks’ venture into Islamic banking would be a constitutional breach.

“The establishment of participation banks through public means is disputable in terms of constitutional compliance,” Oztrak told Al-Monitor, recalling Article 24 of the constitution, which stipulates, “No one shall be allowed to exploit or abuse religion or religious feelings, or things held sacred by religion … by even partially basing the fundamental social, economic, political and legal order of the state on religious tenets.”

Oztrak offered the following arguments: “Economic operations exclusive to the private sector are being converted to state-run operations by the government. To me, the state’s entry into the interest-free banking sector is objectionable in terms of principles as well as economically and legally. The essential principle in this realm requires the state to reduce its presence in the banking system and operate in specialized areas only. However, if the bill submitted to parliament is passed, the state would step into an additional field. Moreover, when state banks enter the participation banking sector they will be making profits from interest, which, in turn, will serve as capital to run participation banks as affiliate companies. This is also contradictory to the logic of participation banking. Ziraat Bank was created to meet the financing needs of farmers, and Halkbank those of tradesmen and small and medium enterprises. Our economic strategy has been based on supporting those particular sectors.”

Profit-sharing instead of interest

In Turkey, participation banks use mostly the "murabaha" and "sukuk" techniques. In murabaha, the bank buys a commodity from a company in the portfolio it has created, adds a margin and then sells it. Clients are informed in advance how much profit they will get and in what time, just as with interest. The earning, however, is called a “profit share” rather than interest. The collected deposits, meanwhile, serve to provide capital support for companies whose commodities are sold.

Sukuk can be described simply as an interest-free bond. Purchasers of sukuk issued by participation banks receive yields under names other than interest. The key difference is that conventional bonds are Treasury guaranteed, while a sukuk certificate is issued on the basis of a tangible material asset.

Islamic banking, based largely on temporary partnerships in company profits, is popular in the Gulf, other parts of the Middle East and countries in the Far East.

According to research by Erkan Kizilocak from Turkey’s Para magazine, participation banks, which debuted in 1985 in Turkey, have total assets of 81.5 billion Turkish lira ($36.9 billion) and 869 branches across the country today. The total financing they have made available to the real economy has exceeded 60 Turkish lira ($27.2 billion).

Globally, more than 700 Islamic finance institutions, relying mostly on Gulf money, operate in 75 countries, offering 52 financial instruments. Their total assets reached $1.8 trillion as of 2013. The sector is expected to be worth $6.5 trillion in 2020. Observers note that Islamic banking has grown in popularity and expanded quickly since the 2008 global crisis.

The Turkish government’s push into a new field in the finance sector is mind-boggling, for only recently Ankara announced a large-scale privatization plan expected to include the sell-off of public bank shares. Is the state going to move out of the interest zone completely and shift into the interest-free one? Or is it planning to grow in interest-free banking as well before privatizing entities in both realms?