The Islamization of Turkey

Two remarkable developments in Turkey on May 29 have increased concern of growing Islamization in the economy and society. 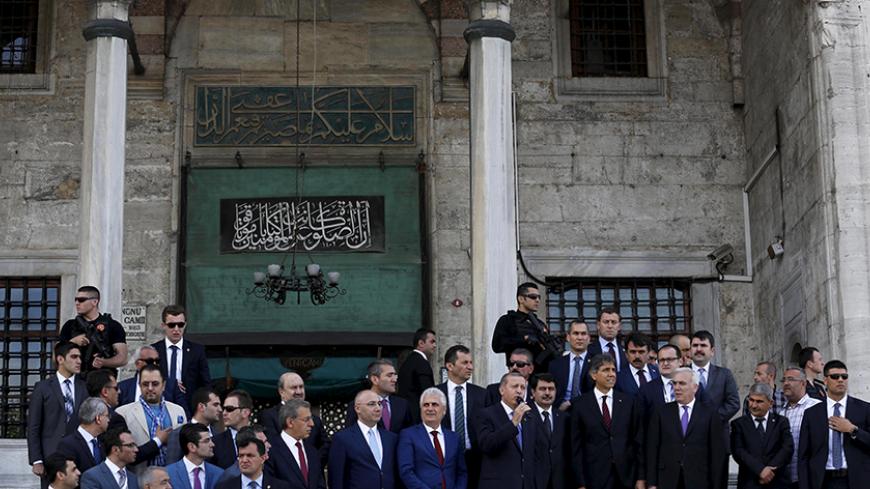 Turkey's President Recep Tayyip Erdogan adressess his supporters in front of a mosque after Friday prayers in Istanbul, May 29, 2015. - REUTERS/Murad Sezer

The run-up to Turkey’s June 7 general elections has been marked by President Recep Tayyip Erdogan’s intensive use of Islamic symbols and rhetoric, including rally appearances with the Quran. On May 29, the Constitutional Court announced a controversial ruling removing restrictions on religious marriages, while Erdogan led an inauguration ceremony of both economic and religious significance.

The event in Istanbul, attended by Cabinet ministers and complete with prayers, marked the launch of the first branch of the Ziraat Participation Bank, the Islamic unit of state-owned lender Ziraat, in line with government decisions to expand Islamic banking in the Turkish financial sector. Islamic banks are called “participation banks” in Turkey, a moniker for interest-free banking that refers to participation in profits from certain financial instruments.

Launched on a Friday, the week’s holy day in Islam, the new Islamic bank is planned to have 20 branches by the end of the year and 170 branches by 2018, employing 2,200 people. Deputy Prime Minister Ali Babacan, who oversees the economy, said the two other state-owned lenders, VakifBank and Halkbank, will also inaugurate their Islamic units soon. This will bring the number of Islamic banks in Turkey to seven.

Hours after the inauguration, another remarkable development took place. The authorities seized Bank Asya, the Gulen movement’s Islamic participation bank. The Savings Deposit Insurance Fund, the body that deals with troubled banks, had already taken over Bank Asya’s management and 63% of its shares on Feb. 3 amid simmering tensions between the government and the Gulen movement. Thus, the Turkish state got two new Islamic banks in a single day. Once VakifBank and Halkbank enter the sector, four of the seven Islamic banks will be state-run.

Ziraat’s Islamic unit was established with capital allocated by the Treasury after the authorities reasoned that using Ziraat’s own capital would be religiously illicit since the bank is a conventional institution operating on the basis of interest rates, a practice prohibited in Islam. Erdogan said the Treasury had transferred 675 million Turkish lira ($260 million) to the new interest-free bank. Ironically, the Treasury itself is known to have raised this fund through interest-based borrowing on the domestic and foreign markets.

According to objectives set in the TKBB’s 2015-2025 Strategy Paper, Islamic banking should expand to 15% of the financial sector in a decade and its total assets should reach $300 billion. Babacan said the strategy paper would be adopted at the government-run Higher Planning Board as soon as possible to become a “state strategy.”

In 2014, Turkish participation banks lent a total of 70 billion Turkish lira ($27 billion) and had total assets of 104 billion Turkish lira ($40 billion), according to the sector’s annual report. The number of their branches, meanwhile, reached 990. Globally, the sukuk (Islamic bonds) issued by Islamic banks amounted to $632 billion in the 1996-2014 period. In Turkey, the noninterest bonds issued in 2014 were worth $6.7 billion, with a $5.5-billion share issued by the Treasury and the remaining $1.2 billion by participation banks.

While the government pressed ahead with its Islamic banking drive, the Constitutional Court issued an intriguing ruling. The court annulled a penal code provision that banned religious marriage ceremonies for couples without a legally binding civil marriage and stipulated jail terms of two to six years for offenders, including both the couples and imams performing those ceremonies. The judgement sparked a widespread outcry that the court was effectively encouraging polygamy, child marriages and the abuse of women.

Four of the tribunal’s 16 judges opposed the annulment, stressing in their dissenting opinion that the move would breach the principle of secularism, victimize women and encourage polygamy and weddings that are not legally recognized. The other 12 judges, meanwhile, opined that since the penal code does not penalize couples living together out of wedlock, penalizing those who get married through a religious ceremony without a civil wedding was a breach of the constitutional principle of equality.

The Constitutional Court’s ruling is likely to deal a heavy blow on women’s rights, as well as efforts to empower women and prevent underage girls from being married off.

Not even the AKP’s Family and Social Policies Minister Aysenur Islam could hide her astonishment. “Marriage is a contract that must be [officially] recorded. The ruling does not nullify the necessity for civil marriage. No measure encouraging the marriage of children or eradicating related legal provisions will be tolerated,” she said in a TV interview soon after the ruling was made public.

She added, “Now that this ruling has been issued, we [the ministry] have to launch new efforts to prevent children younger than 18 from being married off unofficially through religious ceremonies. Everyone is actually aware that child marriages are prohibited. And this ruling must not serve as an encouragement that opens the door for such marriages."

Huseyin Aygun, a lawmaker for the main opposition Republican People’s Party, grumbled in a series of Twitter messages that the Constitutional Court had opened the door for mutah marriages, or temporary marriages in return for money that can last only hours or days. The ruling, he argued, will enable wealthy men to marry dozens of women, while jeopardizing the alimony rights of women and children in case of divorce in marriages sealed only by imams.

The Constitutional Court’s decision and the government’s simultaneous drive to boost the Islamic banking sector come as fresh signs of efforts to transform social life and the economy along Islamic lines. In 2004, the AKP had made an unsuccessful attempt to criminalize adultery and introduce heavy jail terms for offenders. Now with the court ruling, it has gained an important ground in promoting an Islamic lifestyle for Turks. The Islamic banking drive is similarly aimed at consolidating those efforts via the economy.