The Syrian government’s supporters are divided in their views on the US-led strikes against the Islamic State in Syria, with many believing it violates Syria’s national sovereignty and humiliates the country. 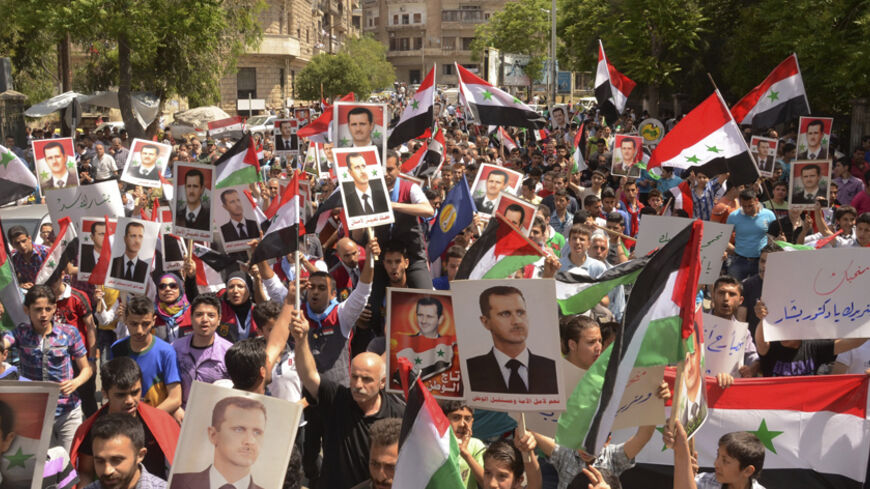 A correspondent in Damascus
October 3, 2014

TARTUS, Syria — Fear has started to spread among the Syrian government’s supporters following the Islamic State’s (IS) victories over regime forces in the northeast of the country, while violent battles against the armed opposition have intensified in the countryside of Hama and Quneitra. Priorities are changing with every turn of the Syrian war. Today, the air raids by the US-led coalition on IS positions in Syria have become a major topic of conversation among regime supporters, as many watch with caution and concern the developments in the ties between the Syrian regime and the Western coalition.

US President Barack Obama and other officials from the member countries of the coalition continue to deny any coordination with the Syrian regime, while stressing that the latter is excluded from any future plans to share influence and interests in the Middle East. At the same time, the Syrian regime’s media outlets state that the regime is a partner in the coalition and is coordinating with the United States, arguing that the international intervention is to its advantage.

The coastal city of Tartus is currently witnessing a lot of activity as locals prepare for Eid al-Adha — the small market there is filled with residents and displaced from various Syrian regions. Everything appears normal, except for the pictures of President Bashar al-Assad with slogans calling for the struggle against the Western conspiracy, and photos of hundreds of victims from the city, which remains one of the most stable and supportive of the regime.

A government employee from Tartus told Al-Monitor, “The US wouldn’t have dared to bombard [positions] inside Syria if it was not coordinating with the regime. Yet, it does not want to announce it to avoid embarrassment, as it has been demanding Assad to step down for three years now, while supporting the armed terrorist groups.”

He added, “How can the US accurately identify positions [inside Syria] to strike if it didn’t have information from the Syrian intelligence services? Would the US have carried out raids without Russian consent? Western countries have recently discovered that there is no alternative for Assad in Syria, but they cannot announce it now.”

In contrast to the confidence with which the government source speaks and which reflects the general loyalty to Assad spread in every corner of the city, others seem to be skeptical about this issue. A school professor residing in Homs, who came to Tartus to spend the holidays away from the battles and car explosions, told Al-Monitor, “The [regime’s] statements are contradictory, and the issue seems to be different this time. At a time when Syrian officials confirmed the coordination with the Western coalition, Russian officials said that the intervention without coordination with the Syrian government is a violation of international law. It seems that Syrian officials are making these statements only to reassure the Syrians.”

If true, do these statements succeed in reassuring the regime’s supporters? In Latakia, which is located 90 kilometers (56 miles) north of Tartus, violent battles are ongoing. A young man from Latakia told Al-Monitor that he has yet to hear from his friend who went missing during his military service at the Tabaqa military airport in the countryside of Raqqa after the IS attack. “Will all this put an end to the bloodshed of the Syrian army’s soldiers? Will it help reveal the fate of missing persons in IS-controlled areas? I don’t think so. I have definitively lost trust in the regime’s media outlets; they told us that the [army’s] withdrawal from the airport was organized and planned, and later on we discovered that hundreds of Syrian soldiers were killed and went missing there,” he said.

The photos of hundreds of youths who lost their lives in the battles against IS and armed opposition forces can be seen all over Latakia. “They have been telling us for three years that these youths are dying in a patriotic battle against the enemies that are backed by the US. Today, they are saying that the battles will continue in conjunction and coordination with the US. It means that the kilings will continue, but this time in cooperation with the US and its allies. Isn’t this ironic?” the young man said.

The involvement of Gulf states in the bombing of Syria has also provoked a strong sense of humiliation among regime supporters. “Shameful! Aircrafts from Bahrain, the UAE and Saudi Arabia are bombing sites inside Syria, and the government says that the raids are in our favor. Where did national sovereignty go? Can we trust them? Won’t they resume their raids to destroy the whole country and bring down the regime?” the young man from Latakia said angrily.

Public views are diverging regarding the Western coalition’s intervention, amid confusion of the current state of the war. One of the reasons behind this confusion is the contradicting positions between the Syrian regime and its allies. While the Syrian government welcomed the raids, it seems that Iran and Hezbollah have taken a more critical stance.

Al-Monitor met with a soldier from the regime forces who was spending his leave in his small village in the Tartus countryside. Portraits of more than 15 young men who died in the battles lined the road we took to this village — a high number given that it is a small village. Slogans against the United States, its allies and others supportive of the regime could be read.

The soldier said, “I stand by the Syrian regime because it is an ally of the resistance in the first place. Today, Hezbollah’s stances seem more rational than those of the Syrian regime, because a US-led coalition cannot be trusted.”

He added, “We need to remember that oil wells and refineries, which the coalition is destroying in the northeast of the country, are the property of the Syrian people anyway. We must also remember that the Western coalition’s member countries continue to support the armed brigades under the title of supporting the moderate opposition, which, at the end of the day, is still hostile to us and the resistance.”

Although the United States is leading airstrikes against the radicals in Iraq and Syria, it has yet to find a partner to engage in ground operations against these terrorists in Syria. Although the Syrian regime is saying that it is the only potential partner, the coalition continues to refuse this partnership, leaving many in the regime camp uncertain about how the situation will unfold.