Syrians on both sides oppose US strikes

Local rebels and pro-regime supporters are both critical of the US-led strikes on the Islamic State for various reasons. 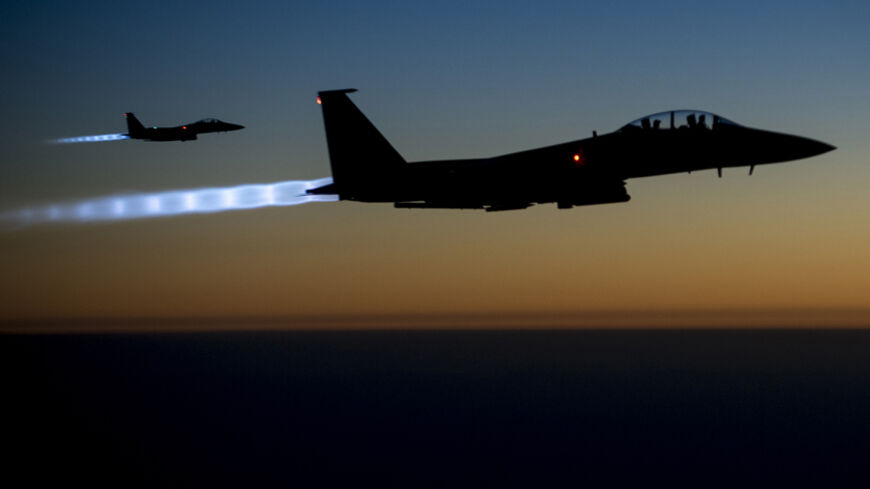 The US-led coalition has finally begun its military campaign against the Islamic State (IS) and other extremist groups inside Syria, plunging this war-torn nation into yet more uncertainty and turmoil. There is widespread rejection of the coalition strikes across the dividing lines inside Syria. Contrary to their political leaders’ stances, Syrians from both camps are against foreign military action, but for entirely different reasons. Aside from the immediate humanitarian worry about potential civilian casualties and the fear that it may prove counterproductive and lead to increased radicalization, each side has its own unique concerns.

Ammar is a longtime Baath Party member and a die-hard regime loyalist. While he did not directly lay the blame for the situation on the regime, he did at least hold it partly responsible. Flustered with indignation, he said, “We were once a powerful nation and a big player in the region. Look at us now — even tiny Bahrain is bombing us. We’ve become a laughingstock.”

This consternation is quite palpable among regime supporters, who feel a mixture of frustration and humiliation at what has become of their country’s sovereignty, although no one blames the regime directly, alluding instead to plots and conspiracies by traitors, Arab nations and Turkey. The fact that the Syrian regime was informed beforehand of the impending strikes came as little consolation.

For its part, the regime seems to be quietly happy about the strikes, in stark contrast to its main backers, Iran and Hezbollah. To the regime’s thinking, it has successfully achieved one of its main objectives: turning the conflict in Syria from a mass uprising into a civil war, and finally to a war against terror. Furthermore, no longer is anyone talking about regime change, which seems to be completely off the table, at least in the short to medium term. Finally, destroying the powerful and capable jihadist groups on the ground will enable the regime’s forces and their allies to regain the upper hand on the battlefield, possibly winning a decisive military victory that ends the conflict. Those groups have proven to be the fiercest and most effective forces fighting the regime, causing it to lose considerable territory and men. Removing them will be to the regime’s advantage, or so it thinks.

Ironically, this is also part of the reason the main opposition group in exile, the Syrian National Coalition, is in favor of military action in Syria. It also reasons that destroying the jihadists will tip the balance of power on the ground to its advantage. The main hurdle to properly arming secular rebel groups was always the West's fear that weapons might fall into the hands of radicals. With that sticking point gone, a powerful rebel army can be trained and equipped, or so the group hopes. Furthermore, the opposition envisions that at some point in the future, the US-led coalition will finally turn its guns on the regime of President Bashar al-Assad, which would almost certainly hand opposition forces their victory on a plate.

However, none of the main “moderate” rebel factions on the ground or their support bases feel the same way. In fact, they have been quite outspoken in their hostility toward the coalition’s strikes in Syria. Even groups that had previously received advanced US weaponry, such as Harakat Hazm, have come out against it, fearing a backlash should they be seen as US stooges. The rebels’ blanket rejection of coalition military action, while being an embarrassment to the United States and other backers of the Syrian opposition, stems from two major points.

First, the targeting of the al-Qaeda-affiliated Jabhat al-Nusra, which is popular both within rebel ranks and among local populations as an effective anti-regime force that, unlike IS, has yet to enforce its hard-line ideology through violence. The second issue is the failure of the coalition to target Assad’s forces or their allied militias. The Syrian rebels have a real fear that given their current state, they will not be able to take advantage of the vacuum created by the absence of the jihadists. That void, they feel, will be filled by the better equipped and more powerful regime forces, who will ultimately become the sole beneficiaries of the foreign military action. Any plans to equip or train a rebel army may come too little, too late.

These sentiments were echoed by Abu Hammoud, a Liwa al-Tawhid commander now in Turkey. He told Al-Monitor, “[The coalition forces'] military action in Syria is unbalanced. They are not striking the root cause of extremism, which is the regime that allowed [IS] to exist. If they remove [IS] but leave the regime, another will come along; it will never end.” There is no love lost between Abu Hammoud and IS, which Liwa al-Tawhid has been battling for almost a year, but his lack of support for military action ultimately aimed at destroying the terrorist group speaks volumes about the intricacies of the Syrian conflict.

There is a minority, bipartisan voice in Syria that is supportive of the coalition strikes against IS and other jihadist groups. These groups are seen as regular spoilers of any efforts to negotiate a political settlement, even scuttling localized cease-fires that are vital in building mutual confidence and trust. Getting rid of jihadists will remove a major obstacle to any eventual peaceful resolution, the stated goal of the United States as well as many major players on both sides. It remains to be seen, however, if this is anything more than wishful thinking, as the cynicism and self-interest of those very players has let down the Syrian people in the past.

The machine of war grinds on in Syria and drags its hapless people into yet another violent and turbulent phase. Far from any respite, there is no light at the end of the tunnel; all we see now is more gloom and uncertainty. Helpless passengers on a horrific ride, we wait to see what the latest bloody escalation will bring as we learn to live with yet another form of death from the sky.