What did Turkey give IS in exchange for hostages?

Turkey admitted to an exchange with the Islamic State for their hostages, but speculation remains on what Turkey promised Liwa al-Tawhid in return. 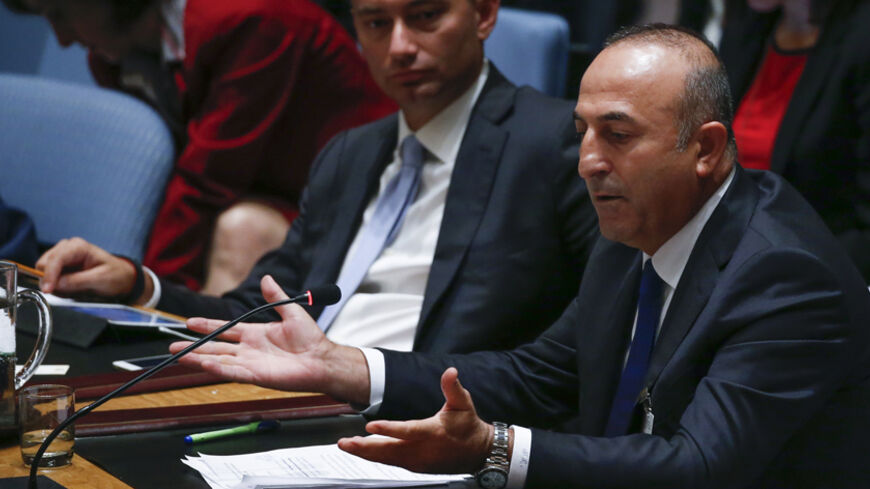 The circumstances of the release of the 49 Turkish hostages in Mosul by the Islamic State (IS) are widely questioned. So, how was their release accomplished?

President Recep Tayyip Erdogan's speech at the Council on Foreign Relations in New York attracted much attention, especially when he said, “It is of course not possible to reach this result without having discussions. You do have contacts, but who does it, or how does it work? When we say the word "operation," people only think of airstrikes, bombs, aircraft, weaponry. But an operation isn't only that. Operations are political sometimes, or diplomatic, or civilian. And they involve discussions, contacts.”

Erdogan's remarks reinforced suppositions of an exchange of hostages. According to a report by daily Hurriyet’s Deniz Zeyrek — citing reliable sources — in exchange for Turkish hostages, a group that included the wife and children of Abdulhamed al-Abidi al-Deilimi, a senior commander of the al-Qaeda-Iraq wing of Abu Musab Zarqawi who was killed in Aleppo last January, was released to the Islamic State (IS).

The Syrian outfit that released this group of IS prisoners was the Liwa al-Tawhid Brigades, a leading proponent of the Muslim Brotherhood in Syria that operated under the banner of the Free Syrian Army (FSA). Liwa al-Tawhid first made a name for itself by claiming responsibility for the July 18, 2012, bomb attack in Damascus that killed relatives of Syrian President Bashar al-Assad and senior Syrian officials.

The close relations between the Turkish government and Liwa al-Tawhid are not a secret. Turkey’s pro-government media extensively covered the killing of a leading Liwa al-Tawhid commander, Abdulkadir Saleh. About 6,000 people attended in absentia funeral prayers held for him in Istanbul.

The Turkish government has long been at loggerheads with the international community for easing support of the FSA and Liwa al-Tawhid, which Turkey classifies as "a moderate jihadist” organization. In Turkey’s view, the only way to combat IS is to support moderate Sunni jihadists and integrate the Sunni political body that feels isolated in the political process in Syria and Iraq.

Turkish security sources who spoke on condition of anonymity told Al-Monitor that Turkey did not free any IS militants in exchange for the hostages, and that there was no outright ransom paid. This tallies with the Turkish government's lines of “We didn’t pay ransom,” and “There was an exchange, but that did not include IS militants.” Then the question is, what did Turkey promise Liwa al-Tawhid for releasing its hostages to IS at the behest of Turkey?

The security sources say there were five earlier attempts for an exchange, which did not work out. What were the reasons for this?

For a start, until the US airstrikes, IS saw itself as a winner and did not feel any pressure to release the hostages. After the air attacks, however, IS hard-liners lost considerable clout in the organization that empowered the Tribal Council of Mosul and the Naqshbandi Army, which had good relations with Turkey, to have more say on the hostages' fate. We must therefore acknowledge that the US airstrikes did serve a purpose. US air attacks against Raqqa, Deir ez-Zor and Abu Kamal with the objective of disrupting IS communications helped strengthen the hand of the Sunni bloc already alienated by the extreme savagery of IS.

This outcome signals clues of a new strategy: First, degrade IS with air attacks, then marginalize IS hard-liners and subsequently integrate the disgruntled IS elements with a more moderate Sunni bloc. This is the solution Turkey is advocating against IS. Only a strong reaction from Sunnis in the region can weaken IS. Turkey also warns that any military intervention against the Sunni bloc by external forces of Kurds, Shiite militias or Westerners can only radicalize the Sunnis and goad them, with the instinct of uniting against the enemy, into the hands of IS.

Second, there had been contact between Turkey and the Kurdish Regional Government (KRG) to rescue the Turkish hostages with a military operation, but no progress was made. One security source tod Al-Monitor that the project did not materialize because of insufficient cooperation and coordination with the KRG. Also, the increasing noncooperation between the Iraqi Kurds and the Kurdistan Workers Party (PKK) and Democratic Union Party (PYD) in Syria emerged as a serious flaw in the struggle against IS.

Bitter criticism by the PKK of the collapse of the peshmerga fight against IS between June and August, increasing international visibility and credibility of the PKK/PYD in international media, significantly disturbed the KRG.

This may explain the denial of support by Iraqi Kurds to the PKK-PYD forces fighting IS in Kobane, and why Turkey did not want to introduce the Kurdish card in the bargaining for the release of the hostages.

Finally, the basic cause of the failure of earlier exchange efforts is the ongoing power struggle and crisis of confidence between IS and Liwa al-Tawhid. The confidence crisis was mainly related to how simultaneity of the exchange of Turkish hostages and IS captives in Liwa al-Tawhid’s custody could be assured, and how the exchange could be observed. Turkey first suggested tranferring the IS captives to Mosul, but IS refused. That is why Turkey took the risk of transporting the hostages by road over 200 miles to Akcakale on the Syrian border. Turkish intelligence personnel monitored both the journey of the Turkish hostages and Liwa al-Tawhid’s delivery of its IS hostages.

In a nutshell, involved Turkish institutions and political decision-makers collaborated well to conclude this tedious, painstaking process. Turkey did not directly pay a ransom to IS, did not release any IS militants and the US airstrikes played a role in making IS sit at the table. Nevertheless, we still do not know what Turkey promised to Liwa al-Tawhid in this bargain.