Turkey’s IS predicament with US, Kurds

While Turkey dithered about joining the anti-Islamic State coalition, PKK military chief Murat Karayilan said the Kurdish peace process was over, derailed by Ankara's dealings with IS. 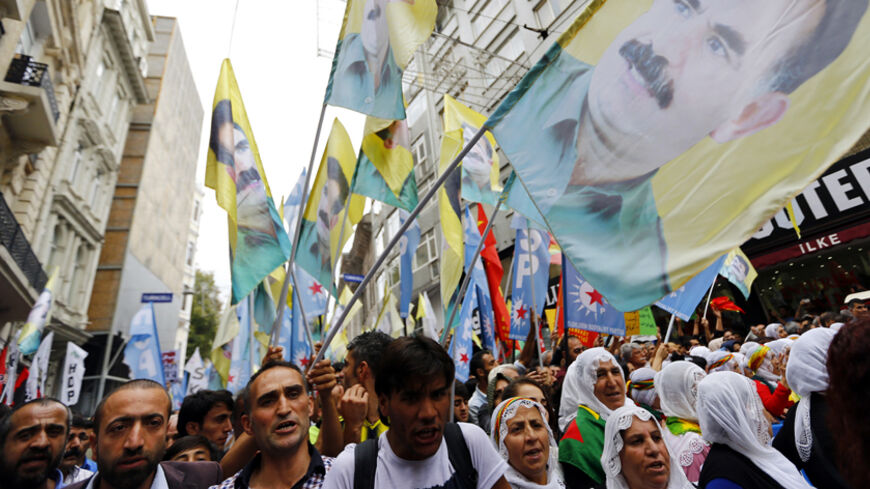 People carry flags bearing the portrait of Abdullah Ocalan, one of the founding members of the Kurdistan Workers Party, during a pro-Kurdish protest against Islamic State militant attacks on Syrian Kurds, in Istanbul, Sept. 21, 2014. - REUTERS/Murad Sezer

Last Sept. 20, Turkey woke up to surprising news: Early in the morning, the 49 hostages held by the Islamic State (IS) since the day it captured Mosul on June 10 were released. The first public reaction was naturally of joy and great relief. Prime Minister Ahmet Davutoglu cut short his official visit to Baku and flew to Urfa to meet with the released hostages and fly with them to Ankara.

The drama of the hostage issue instantly transformed into a vigorous public relations campaign on the success of President Recep Tayyip Erdogan's rule and the Davutoglu government in Turkey. But that did not pre-empt the question in public opinion: What was the deal behind all this? What is the behind-the-curtain story of the hostage release?

The question received an implicit response from Erdogan, who confirmed that there was a “political and diplomatic deal.” On the way to New York to attend the UN General Assembly, he confirmed that a deal was made with IS.

He reiterated his statement in a speech in New York.

Speaking and answering questions at the Council on Foreign Relations, he also hinted that Turkey had engaged in a prisoner exchange with IS as part of the effort to win the release of the hostages.

“When we say the word operation, people only think of strikes, bombs, weaponry, but operations are also political, diplomatic, civilian, and they involve discussions, contacts,” Erdogan said. “I can tell you we have not had any monetary relationship, that’s clear. Now as to the rest, you probably cannot expect us to publicly divulge what intelligence agencies do in their business, but the end result is that 49 diplomatic and consular staff have been freed. Some say maybe there’s been an exchange. … But it also takes an effort to prepare for such a thing.”

Hence, the deal with IS is certified by the president of Turkey.

Meanwhile, Turkey has already begun to discuss the question: Since the hostages were released, should Turkey be expected to be more ready to cooperate in the joint action against IS because its reluctance had a quasi-legitimate pretext because of its hostages?

The United States badly wants Turkey to take a prominent role in its anti-IS coalition, including allowing its bases to be used to launch airstrikes. US Secretary of State John Kerry, in an exclusive interview on NBC-TV, mentioned Turkey as an ally and friend but voiced his expectation for Turkey to stop IS' smuggling of oil that provides it financial strength, as well as further Turkish concrete cooperation in the US-led effort against the Islamist organization. He said, “Now that the hostage situation has been resolved, Turkey should commit its resources to fight,” and concluded with the following sound bite: “The proof will be in the pudding.”

However, in terms of meeting American expectations, the signals coming from Turkish government circles are not very promising. First of all, many influential people in and around the government tend to see the US-led joint action against IS as another form of a Crusader mission over the lands of Islam and Turkey, a country that should remain faithful to its past, history and tradition and therefore cannot take part in such an endeavor.

This is never put in so many words publicly, but in the private conversations, including with this writer, that is how the prevailing mind-set operates.

Faruk Logoglu, a former Turkish ambassador to Washington and an opposition member of parliament, a leading figure in foreign policy issues, sees the “deal with IS” as scandalous, which could place Turkey’s relations with the Western world on a more problematic course. He asked the government: “There are serious allegations that IS has been supplied with tanks and weapons and that these were carried by train to Tell Abyad. The government must respond to these allegations. What is meant by a ‘diplomatic deal’ is the freeing of IS militants detained in Turkey. How many? Why were they detained? For example, on March 25, 2014, three IS terrorists were arrested for killing three citizens at Ulukisla-Nigde. Are they part of the deal?

“Erdogan’s remarks on an exchange are scandalous, showing that he recognizes IS as an interlocutor to make diplomatic deals with. Social media close to IS reported 150 IS militants, 50 of them women, detained in Turkey were released. Sources close to the PKK allege Turkey has supplied IS with tanks and other weapons. Finally, IS could have been assured that Turkey will remain outside the coalition.”

There are many indicators that Turkey, even after the hostage release, does not have a free hand vis-a-vis IS. While it has rescued its hostages, it still remains hostage to IS.

But more important than all this is the perception on the Kurdish side about the deal with IS. The Syrian Kurdish Democratic Union Party (PYD) leader Salih Muslim, whose hometown Kobani on the frontier is under IS attack, puts the blame on Turkey. He bitterly criticized Turkey: “They are not intervening. They at least should not obstruct others from helping. Should Kobani fall, who will be responsible? Turkey. This will reflect adversely on the peace process.”

Much more striking was PKK military commander Murat Karayilan’s accusation that to secure the release of its hostages, Turkey let IS capture Kobani, the Syrian Kurdish stronghold on its border, which is just across from Turkey’s Suruc, the hometown of Karayilan himself.

Karayilan’s statement to Sterk TV had some striking points about the IS attacks, Turkish government policies and the peace process. Karayilan said the IS assault on Kobani “is a joint plan by Turkey and IS. We have documents of it. Turkey has once again stabbed the Kurds in the back. Turkey wanted to sell Kobani but it can’t. Kobani is Kurdistan.”

About the peace process, Karayilan said, "Turkey cannot deceive us again. This is a declaration of war. It will be assessed by our leader and command but for HPG [the PKK’s armed wing] this process has no more meaning.”

Karayilan said, ”Kobani will not fall as planned by Daesh [IS in Arabic] and the AKP [Justice and Development Party]. To the contrary. Tell Abyad will fall. It is time to expel this dirty and savage gang from Kurdistan.”

Imprisoned PKK leader Abdullah Ocalan, in a message he sent from his Imrali prison cell, guardedly criticized Turkey and called on Kurds to mobilize for Rojava and Kobani. Ocalan’s lawyer quoted him saying about the negotiations between the government and IS about the hostages: “The state openly said that it negotiated for the release of the Mosul hostages. But it has yet to start the negotiation process to resolve such a deep issue as the Kurdish problem.”

The lawyer said Ocalan called for negotiations to start as soon as possible.

About IS attacks, the lawyer quoted Ocalan saying, “Our people have to adjust their lives to cope with the high-intensity war they are facing. Not only the people of Rojava, but Kurds all over have to [adapt] to it. I am calling on all the Kurdish people to resist this high-intensity war.”

It is clear that IS is becoming a predicament for Turkey’s government in its relations with the West and simultaneously with the Kurds in the region.

KRG’s disappointment with Turkey for allegedly failing to come to its aid when Erbil was threatened by IS is getting much more menacing dimensions with Turkey’s and Syria’s Kurds because of the Turkish reluctance to take action against IS in its aggression toward the Syrian Kurdish bastion of Kobani.