How and why were 46 Turkish hostages freed?

Turkey wonders what brought about the freeing of the hostages taken at its Mosul Consulate and why they obtained their liberty now. 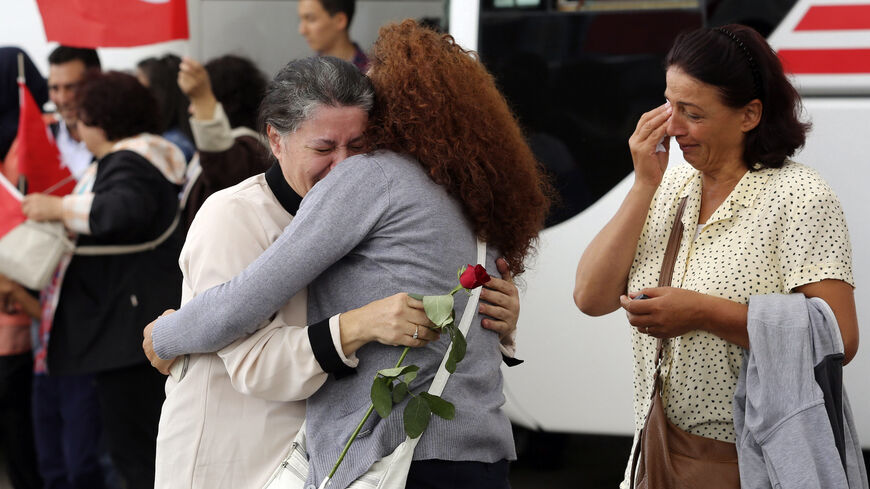 An employee (C) at Turkey's Consulate in Mosul is welcomed by her relatives at Esenboga International Airport in Ankara, Sept. 20, 2014, after being freed. - REUTERS

Forty-nine staff members of the Turkish Consulate in Mosul (three of whom are Iraqi nationals) who were taken hostage June 11 by the Islamic State (IS) were freed at 6:30 a.m. Sept. 20. Details of the operation are slowly emerging.

According to what Al-Monitor learned from Turkish security sources, the operation was planned by Turkey’s National Intelligence Organization (MIT) and closely coordinated with the prime minister's office, the Foreign Ministry and the chief of the Turkish General Staff.

According to information provided by officials and communicated by the media, in the three months of their captivity the hostages were kept together in Mosul but their location was changed eight times. The MIT had been keeping track of their movements for the last two months, both through human intelligence sources and with unmanned aerial vehicle (UAV) surveillance.

Three plans were developed for the rescue of the hostages: a military operation, persuasion through contacts with IS or paying ransom. Turkish intelligence officials were in close contact with IS in Mosul, with the Army of Naqshbandi dominated by former Baath cadres and with the Council of Mosul Tribes. The plan for a military operation was shelved after establishing close contacts with influential Sunni Arab tribes in Mosul who have been friendly to Turkey for many years. Turkey’s close liaison with the Mosul tribes was never a secret.

According to official statements, Turkey carried out the rescue operation all by itself without any input from foreign intelligence services. Officials also denied any ransom bargaining. They said no ransom was paid and there were no hostilities during the operation. The official Turkish narrative spoke of persuasion through contacts, an exclusive Turkish operation, no ransom payment and no clashes, while emphasizing the role of the Sunni Arab tribes of Mosul. Turkish news media reports are overflowing with praise for the MIT.

Interesting reports surfaced on the Takvahaber news website, which is identified as the IS mouthpiece in Turkey. According to one Takvahaber report, which was based on the Twitter account of Abu Bakr al-Baghdadi, the IS caliph, the decision to release the hostages was personally approved by Baghdadi after Turkey refused to agree to the US demand for “active support of the coalition.”

According to the same report, there was no operation of any kind. Hostages were moved on the night of Sept. 19-20 from Mosul to Raqqa in Syria, which is known as the IS capital and therefore considered more secure. They were then moved from Raqqa to Turkey’s Akcakale crossing about 40 miles away, and handed over to Turkish officials.

In addition to the key question of whether the hostages were rescued through an operation or handed over by IS to Turkish officials, another question that gained prominence is, “Why now?” Why did IS give up the strategic ace it was holding against Turkey just now that the United States is setting up a coalition and is about to launch a military offensive?

Two major factors may have been at play. The first was the changing balance of power in Mosul: According to Turkish intelligence sources, US airstrikes seriously degraded IS communications between key centers in Mosul, Fallujah, Raqqa and Tikrit it controls. IS withdrew most of its Mosul forces to inland areas. US airstrikes were instrumental in changing the power structure of Mosul by strengthening the role of the Army of Naqshbandi and the Council of Mosul Tribes. Both favored the release of the hostages. The second major factor was the severe reaction from the Sunni world after IS released visuals of the beheadings it carried out of three Westerners. As such, IS' release of the Turkish hostages signifies a change in IS strategy and signifies a move to win over Sunni public opinion.

In Turkey, some experts said a congratulatory message issued by the chief of the Turkish General Staff in a media statement titled “Return of the Mosul consulate personnel” showed how the military command wanted to emphasize that the operation was not carried out solely by the MIT, but with military support. Security sources said the UAV surveillance activity to monitor the movements of the hostages was carried out by the military, and said Turkish special forces provided security for the entire operation. Since the 2003 US invasion of Iraq, Turkish special forces coordinated liaison operations in Kirkuk, Mosul and Tal Afar in conjunction with the US Army, and during the course of those activities developed strong ties with local elites.

A final question: Why were the hostages held in Mosul not handed over to officials of the Kurdistan Regional Government (KRG) 20 miles away, but instead taken 200 miles to Raqqa and then to Turkey’s Akcakale? There may be two major factors at play here as well. It could be that Turkey did not want the Kurds in northern Iraq to play the role of an intermediary and be seen as the “saviors.” The second factor could be that there is a crisis of confidence between the Sunni tribes of Mosul and the KRG. It is likely that the tribes did not want the hostages to be handed over to the Kurds. This possibility is significant for indicating soured relations between the Iraqi Kurds and the Sunni tribes.

The main question in the Turkish media is "What now?" Since the hostages have been released, will Turkey be less recalcitrant to join the anti-IS coalition? This is going to be a hotly debated issue in the coming days, particularly since Turkey cited the hostages as a major reason for not joining in the coalition.

Of course, conspiracy theories on regional developments are making the rounds. A member of the Turkish parliament wrote on Twitter: “Release of the hostages is actually a CIA move to persuade Turkey to join the coalition.”

This tweet will certainly find a prominent place in the Turkish tradition of resorting to conspiracy theories to explain complex issues. In this case, however, it is worrying that such a theory emanated not from the man in the street but from a parliamentarian.

In short, two key questions that will be discussed now are why IS released the Turkish hostages and why now. The Turkish media is justifiably confused, wondering why the hostages were released now if no ransom was paid, and there being no apparent IS gain for the release. That could mean that IS is losing power, or that it is engaged in a major public relations effort to win back the hearts and the minds of the Sunni world it alienated with its barbaric actions.