Although Saudi and Iranian officials have cemented talks in recent months, this is not significant enough to alter ties between the two foes. 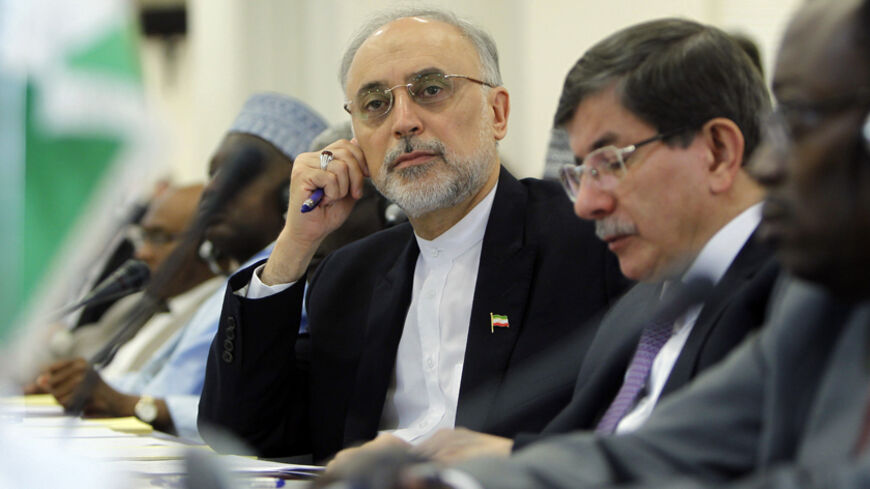 Iranian Foreign Minister Ali Akbar Salehi (L) looks past his Turkish counterpart, Ahmet Davutoglu, during the opening of a ministerial meeting in the Saudi Red Sea city of Jeddah, by the Organization of Islamic Cooperation (OIC) on May 13, 2013. - AFP/Getty Images

BEIRUT — The Middle East is going through many developments, most notably the fluctuations of Saudi-Iranian ties, which affect the future of the countries in the region including that of Lebanon. Over the past few months, positive developments have emerged including the visit to Jeddah in August by Iran’s Deputy Foreign Minister Hossein-Amir Abdollahian.

Progress in Saudi-Iranian relations was further emphasized by a meeting between Saudi Foreign Affairs Minister Saud Al-Faisal and his Iranian counterpart Mohammad Javad Zarif at the UN General Assembly in New York in September, which culminated in discussions on the importance of cooperation to combat terrorism and resolve the region's qualms.

Is the Saudi-Iranian relationship still heading toward collaboration in the face of the dialogue, to address the existing problems throughout the Middle East, or is the relationship moving toward confrontation, particularly in light of the accusatory discourse among the two countries? For instance, Saud attacked the Iranian position during talks held in Jeddah with his German counterpart. He said Tehran was “part of the problem in the region, not of the solution,” and he accused it of “occupying Syria, Iraq and Yemen," calling for the withdrawal of “the Iranian occupation forces” in these countries. Iran’s response was expressed by its foreign minister, who demanded that Saudi Arabia “withdraw its forces from Bahrain.”

Lebanese diplomatic sources that were following up on this concluded that a quantum leap has not been achieved in the Saudi-Iranian relationship. They recalled the 2009-10 experience that had suggested there are indications for an agreement and a resolution between Saudi Arabia and Syria, followed by Iran, and that the two countries were heading toward dialogue and negotiations. At the time, this was reflected in the Saudi monarch’s position, which was expressed during the 2009 Arab Economic Summit in Kuwait, where he called for reconciliation, convergence and the unification of Arab nations against growing challenges and risks.

In 2010, King Abdullah bin Abdulaziz took the initiative of visiting Damascus and accompanied Syrian President Bashar al-Assad by plane to Lebanon, where a tripartite meeting was held in the presence of former Lebanese Prime Minister Saad Hariri.

During the meeting, the Saudi monarch stressed the importance of protecting the Arab nations and preventing fragmentation and sectarian infighting, particularly between the Sunnis and Shiites. Back then, in response to a request from Saudi Arabia, Hariri visited Damascus twice, where he was hosted by Assad on one of the nights, and with whom he met twice, despite his tense ties with the Assad regime, following Rafik Hariri’s assassination.

In 2010, Hariri visited Iran. Yet, this positive development soon met serious setbacks. At the time, it was said that the setbacks were the product of Western advice to Saudi Arabia to not take the reconciliation with the Syrian regime too far, i.e., reach a final agreement. This is in addition to the pressure that Bahrain’s opposition movement, backed by Iran, increasingly places on the Hamad bin Isa Al Khalifa regime, which is politically and geographically linked to Saudi Arabia. Thus, the Gulf countries sent forces — the so-called Peninsula Shield Force — in support of the Bahraini regime in 2011. As a result, the tension between the two countries resumed.

The same sources based themselves on these facts to reach the latest rapprochement between Saudi Arabia and Iran, and to speak of the possibility of reviving the logic of negotiations between them, in conjunction with the growth of extremist movements, particularly the Islamic State. For negotiations to succeed, it was necessary to embark on practical steps on the ground. In the beginning, these were reflected in Iraq, with the Gulf side insisting on the removal of then-Prime Minister Nouri al-Maliki and the active engagement of the Sunni component in the Iraqi government and the country’s security system. Following the hesitation and tension, due to a strong movement in support of Maliki, the active religious and political authorities took a final decision to reach a consensus over a new prime minister and the formation of a national unity government.

However, in spite of this progress and the positive messages between the two sides on Iraq, the Houthis’ unwillingness to take power and the threat posed by al-Qaeda’s growing strength in South Yemen left the door open for compromises.

The Lebanese diplomatic sources concluded that it is necessary to achieve progress in several areas, before a qualitative and lasting shift in the relationship between Saudi Arabia and Iran can be established:

As for Lebanon, which is linked to all of these regional balances, it is still suffering from its inability to hold presidential elections as long as Lebanese parties connect the fate of these elections to regional circumstances, and as long as the Christians are not in agreement. The diplomatic sources said Saudi Arabia was not in a hurry to see a Lebanese head of state elected if there was no agreement on a president. Furthermore, Iran is not supporting a specific candidate, as long as the March 8 Alliance — which is close to Tehran — is not able to guarantee the majority needed to elect the president, i.e., 86 of 128 votes. Thus, the Lebanese case remains a card in the hands of Saudi Arabia and Iran and is subject to a tug-of-war as long as a solution is not reached that includes all regional issues.

As for the security situation in Lebanon, the sources said that the Saudi-Iranian tensions would have no effect as long as the regional and international decision to maintain Lebanon's stability is still present, even though Lebanon is engaged in a war against terrorism and extremism on its territory. It is worth noting the importance of strengthening the approach of negotiations and mutual understanding between Iran and its allies on the one hand, and Saudi Arabia and its allies on the other, to eliminate extremism in the region and restore stability to governments and countries. Saudi-Iranian relations are essential, but are not enough in isolation in light of the presence of regional and international players such as Turkey, which still aspires to impose a balance of power in its favor, and Israel, which can only benefit from feeding grueling conflicts among its neighbors.