The closing of the Rafah crossing by Egypt following the terrorist attack in Sinai will worsen the humanitarian situation of Gaza residents, for whom the crossing is a lifeline to the outside world. 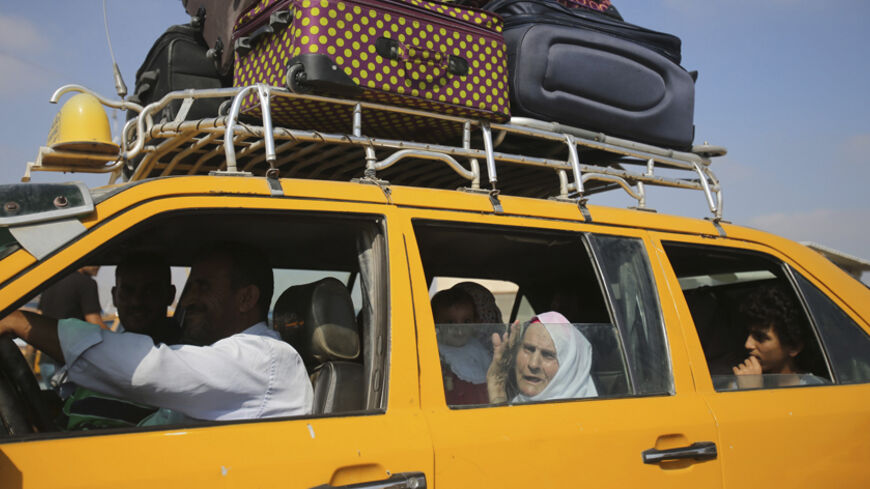 Palestinians, hoping to cross into Egypt, ride in a car as they wait at the Rafah crossing in the southern Gaza Strip, Aug. 25, 2014. - REUTERS/Ibraheem Abu Mustafa

RAFAH, Gaza Strip — Since 2007, Gaza’s border crossing to Egypt has become like a gun pointed at Gazans. Its closing recurs throughout the year, sometimes under the pretext of Egyptian national security and other times due to Palestinian divisions and Hamas’ control over Gaza. As a result, it has become a card that Egyptians play whenever they want to put pressure on Gaza’s inhabitants, and it is adding to Gazans’ suffering, especially with the tight Israeli blockade.

The terrorist operation in Karm al-Qawadis in Sheikh Zuweid city, north of the Sinai Peninsula, on Oct. 24, which killed more than 30 Egyptian soldiers, happened on Egyptian territory, and most tunnels between Egypt and Gaza were closed. Despite this, the Egyptian government and media quickly accused the Gaza Strip and its factions of carrying out the attack. Once again, the citizens and the crossing were victims of the deteriorating security situation in Sinai after the death of the Egyptian soldiers.

Egyptian sovereign parties stated on the day following the attack that the Egyptian army started a military operation in Sinai to eliminate “terrorist hotbeds.” The operation would last between three to six months. Therefore, the crossing would be closed for a long time.

Said al-Tawil was affected by the crossing’s closing, as he was supposed to travel to Egypt a few days after the ambush of the soldiers to defend his master's thesis. However, the indefinite closing prevented him from going.

Tawil, who is studying at Suez University, north of Sinai, told Al-Monitor that dozens of Gazan students are incapable of traveling and completing their master’s graduation procedures in Egypt. They might lose everything they paid during two years of study.

“I paid large sums of money for my education in Egypt, but I might lose 1,200 Egyptian pounds [$167] that I paid for my thesis defense because I could not make it on time,” he said.

The director of the border crossings in Gaza, Maher Abu Sabha, told Al-Monitor the Egyptians have closed the crossing until further notice. He said this was due to Sinai’s security situation, and it was up to Egyptians to open the crossing again whenever they felt there was improvement.

“When Egyptians declare a three-month state of emergency in Sinai and impose a curfew up to 14 hours a day, even if the crossing was opened, the situation would be very tough,” Abu Sabha said. “I think that the crossing will be opened in a few days only to allow the people stuck at the Egyptian side to return to the Gaza Strip.”

However, Abu Sabha expected the crossing to remain closed for a long time and wondered about the Gazans’ fault in the incidents on the Egyptian territories. He said the closing would affect all the inhabitants of the Gaza Strip.

“All 1.85 million citizens will be affected, as the Rafah crossing is their only outlet to the outside world, given the Israeli blockade on the Gaza Strip and the food shortage. On normal days, 5,000 people travel through the crossing, but during the state of emergency declared by Egyptians, only 1,500 people with travel needs, like students, traders and sick people, pass the crossing. Egypt was not the only destination, as Gazans head to other countries, too. Consequently, when the only outlet is closed, it is obvious that Egyptians are tightening the blockade on the Gaza Strip,” Abu Sabha added.

He said Egypt had the right to defend its national security, but it had no right to inflict death on the Gaza Strip’s inhabitants and waste their future. He also said the Ministry of Health was issuing hundreds of medical referrals for cancer, kidney failure and hepatitis patients who currently need treatment.

He said the situation seemed simple when disregarding an important aspect of the problem, which is the Gaza Strip citizens who were stuck in other countries.

“Each time anything happens, the Egypt authorities close the crossing and instruct all [international] airports not to transport Gazans to Cairo International Airport. This is how Gazans get stuck in other countries, where their situation deteriorates, until the Rafah crossing is reopened,” he added.

According to the 1948 Universal Declaration of Human Rights, each individual has the right to inherent dignity and some rights that cannot be meddled with, because they are the foundation for freedom and justice in the world. The right to move around is part of the individual’s freedom, which makes it one of the basic human rights. Article 13 states that “everyone has the right to freedom of movement and residence within the borders of each state. Everyone has the right to leave any country, including his own, and to return to it.”

Palestinian political analysts and observers expect the closing to persist for a long time, in light of the Egyptian statements. Political analyst Walid al-Moudallal said that, given the sovereign Egyptian decisions and the talk about exceptional procedures that will go on for two years, it seems the closing will last for a long time and will generate bigger problems.

Moudallal told Al-Monitor, “The irony is that closing the crossing has become the normal rule, and opening it is now the exception. Moreover, the constant closing of the crossing is already harming people who have a special situation, like patients, wounded individuals and students. What will happen, then, if this lasts for a long time?”

Moudallal finally described closing the crossing as a collective punishment affecting the citizens of the Gaza Strip. He condemned it, saying it was a clear violation of international and humanitarian law and that it harms the future relations between Egyptians and Gazans.

“Although Hamas and the Palestinian factions asserted that they are not responsible for what happens on Egyptian territories, the Egyptian regime insists on blaming them without grounded evidence. Worse yet, it allows the Egyptian media to ooze hatred through its papers and TV channels without taking into consideration the neighborly rights and the historical relations between the Gazans and Egyptians,” Moudallal said.

Rafah’s border crossing is the gateway of Gazans to the outside world, but it is constantly shut in their faces. As a result, political games have turned the crossing into a guillotine and an Egyptian gun pointed at Gazans.