A sick Gaza toddler died in his parents' arms while waiting for the Rafah crossing to open to get specialized medical treatment abroad. 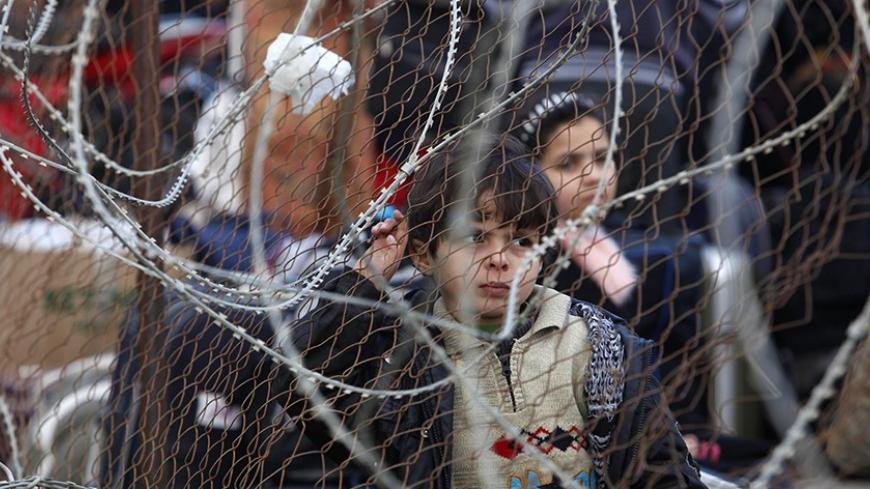 A Palestinian boy waits with his family at the Rafah crossing between Egypt and the southern Gaza Strip, Feb. 4, 2014. - REUTERS/Ibraheem Abu Mustafa

GAZA CITY, Gaza Strip — The mother of 14-month-old toddler Ahmad Abu Nahal left her son for a few minutes to prepare him a bottle of milk. When she returned, he was motionless. He had just died.

“Once I saw him in this state and didn’t hear his breathing, I knew that he had died. I cried heavily at home. He died as we watched, waiting for the Rafah crossing to open. We wanted to go to Turkey, where he would be treated,” said Ahmad’s mother, Islam Abu Nahal. Ahmad had breathed audibly, suffering from an enlarged heart.

During an interview with Al-Monitor at the family home, she said that Ahmad had spent more time at the hospital than at home. His body was full of blue marks from his injections.

The Rafah crossing between the Gaza Strip and Egypt has been closed for more than 46 days, during which time hundreds of patients have waited to travel to Egypt, Turkey, Saudi Arabia and other countries to be treated in hospitals there. The patients had received grants from the Palestinian Ministry of Health for that purpose.

The Egyptian authorities notified the Interior Ministry in the Gaza government that it was opening the Rafah crossing for three days, starting on March 29. This decision came after Arab presidents, including Egypt's interim President Adly Mansour, stressed the need to lift the blockade on Gaza during the Arab League Summit in Kuwait.

Ahmad’s father Adnan lamented his helplessness to save his son, saying, “I felt powerless seeing my child die in my hands as we waited for the crossing to open. We hoped he would survive, but there was nothing I could do. Every day I ask myself, 'Did I do all I could?'”

Adnan had taken his son to Israeli hospitals, but they said there was no treatment for his condition, which quickly deteriorated and led to an enlarged liver.

Ahmad died on March 13, eight days before Mother’s Day, a somber one for Ahmad's mother. Her only comfort, she said, was the presence of her two daughters Tala and Lana.

The crossing’s closure is harming not only patients but workers, too. Jayab Abu Safieh, an announcer for Al Ghad Al Arabi TV based in London, explained his ordeal to Al-Monitor. “My ticket was postponed five times. It was then canceled last Friday because I could not catch my flight.” He explained that he came to attend his brother’s wedding only to find himself stuck in the prison of Gaza, from which only pilgrims to Mecca in Saudi Arabia can leave.

He added that his coworkers covered for him in his absence, but after his vacation ended, they started pressing him to return, as they had yet to take their annual leave.

“No one senses how bad the [Gaza] siege is, except those who live inside,” he exclaimed.

I, too, have endured similar trying circumstances, failing to attend a women’s rights panel discussion in Washington March 18 after being denied passage through Rafah.

In a phone interview with Al-Monitor, Maher Abu Sabha, the director of the general administration of crossings, said, “The suffering has gotten worse, and there are very serious [medical] cases that need to go directly from intensive care to Egypt. … The crossing is being opened only for pilgrims to Saudi Arabia as a kind of propaganda to give the impression that the crossing is open, but it is in fact closed to patients, students and holders of foreign passports and residency permits.”

He said that they stopped registering people for travel after the waiting list reached 6,000, and that if they reopen the registration process, tens of thousands of people will register to leave.

The crisis at the crossing peaked on March 4, when an Egyptian court in Cairo banned all Hamas activities and deemed the movement a terrorist organization in Egypt.

Al-Monitor learned from a source in the Gaza government that after this decision, communication between Egypt and Hamas significantly declined.

“The government and Hamas are very dismayed because of the long closure of the crossing and the charges that the movement committed crimes,” said the source, pointing out that Egyptian authorities repeating these accusations have deterred the Gaza government from seeking to restart communication. The source described the current state of relations as a political rupture.

This is the longest period that the Rafah crossing has been closed in years, which is confronting the Gaza government with a serious crisis. “This crisis gives the Hamas movement three options: stop its support for the Muslim Brotherhood, an ideologically difficult option; agree to President Mahmoud Abbas’ conditions for reconciliation, the easiest option; or for Hamas to leave the government,” said political writer Akram Atallah.

Atallah told Al-Monitor that the Egyptian court’s decision deeming Hamas a terrorist organization legitimized Egypt’s tightening of procedures against Gaza since last July, adding, “Before the court’s decision there was a small channel of communication between one Gaza government official and the Egyptian intelligence services, but that channel has been completely closed.”

The undersecretary of the Ministry of Foreign Affairs in the Gaza government, Ghazi Hamad, does not agree with these options. He said, “It’s not a matter of having options. [Rafah] is an international crossing and it should be opened. Even for states at war, crossings remain open for humanitarian cases. There is no enmity between us and Egypt, so why has the crossing been closed for a long time?” He pointed out that even the Israeli occupation keeps the Kerem Shalom and Erez crossings open.

Regarding the decision of the Egyptian court, Hamad said that Egypt has not officially notified the Gaza government that Egypt has stopped dealing with it, and the proof is that Egypt still allows the arrival and departure of pilgrims through the Rafah crossing. He said that the question of why the crossing is closed should be directed primarily at Egypt.

“There are 550 patients who urgently need to leave the Gaza Strip, and some have died while waiting. We cannot keep people hanging until there are political changes,” he added.

In an interview at his office, Hamad said that Palestinian figures are in mediation with the Egyptians with no results so far, and that the Gaza government has directed messages to the Arab League, the United Nations, embassies and consulates, but nothing has changed.

Officials in the Gaza government have no solution for the closure of the Rafah crossing, either.

“What about the families that are seeing their children die?” asked Ahmad’s father. “My son died and nothing happened. It was as if his death was a fleeting matter, but in fact, it changed us forever.”